The Significance of Paying it Forward

Mentorship is a word that is found in every successful person’s dictionary. Mentorship can take place in various forms such as one on one relationships between advisors and students or in big groups where multiple people are influenced together. Beta Beta Beta, the biology honor society, Future Health Professionals (FHP), and Women in Scientific Discovery or Medicine (WISDOM), a group initiated at Rosalind Franklin University of Medicine and Science by Nicole Woitowich, are three groups that have taken an initiative to collaborate and provide Lake Forest College students interested in medicine, research, or science with a solid foundation of mentorship. Nicole Woitowich who obtained her Masters from Northeastern University is now completing her PhD at Rosalind Franklin University of Medicine and Science. She introduced WISDOM to Lake Forest College during the spring semester of 2014 in collaboration with Lake Forest College seniors at that time, Anhar Mohammad’13 and Anastasiya Koshina’13. Since spring 2014, Beta Beta Beta, FHP, and WISDOM have been collaborating to bring events and information to the students of Lake Forest College. In this article, I will briefly describe the process of how WISDOM began its collaboration with Lake Forest College and some of the events these three groups have initiated thus far.

The success story behind the establishment of Women in Scientific Discovery or Medicine (WISDOM) became clear after an interview with Nicole Woitowich. She mentioned how her mentor provided her with the motivation and the right amount of push to pursue a PhD. She described mentorship as a dynamic relationship where both parties grow and learn from one another. This is one of the core establishing principles of WISDOM, which allows already established professionals, and students in graduate school, medical school, podiatry school, and different masters programs, to form relationships with Lake Forest College Students and guide them to pursue their dreams. When I asked Nicole about why she chose to collaborate with Lake Forest College, she explained how the location was convenient along with the students and faculty here who were always friendly and welcoming. Thus in spring 2014, the relationship between WISDOM, Tri-Beta, and FHP began with the first meeting which consisted of a room full of eager students ready to help with the new foundation in any way possible.

Not only was this collaboration maintained during the last academic semester, major efforts were taken by Khadijah Hamid, the president of Tri-Beta for the 2014-2105 academic year, Maribel Munoz, the president of FHP for the 2014-2015 academic year, and Nicole Woitowich, the founder of WISDOM to have meetings during the summer. We successfully held a picnic this July where Lake Forest College students were able to meet with a few medical school students and PhD students to discuss their goals and careers while munching on some de- licious food. We also successfully arranged an event at Rosalind Franklin University of Medicine and Science with the help of Nicole Woitowich, other WISDOM members, FHP officers, and Tri-Beta officers such as Peter Nesper who arranged for a bus to transport about 30 Lake Forest College students on October 22nd. This event consisted of an informational panel on different programs at Rosalind Franklin, a tour of the campus which involved seeing mannequins used by medical students to practice their patient-doctor interaction, dinner and a question answer session where Lake Forest students were able to ask any questions to the students there. The evening ended with excited Lake Forest College students who claimed that this trip had opened their eyes to more opportunities. 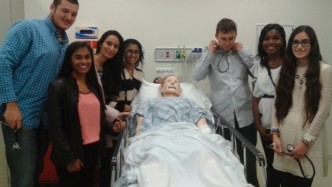 As we grow older, we find fewer people to become our mentors, and we find ourselves in those mentorship roles. As a third year student at Lake Forest College already, I have realized how fast time has gone by. I have found myself in various mentorship roles as a Math Science Resource Center tutor, admissions student worker, and peer teacher for many Biology courses. As Nicole stated in her interview, mentorship is a dynamic relationship where both parties grow, I have truly seen myself grow in all of the mentoring positions I have held thus far. The three groups are currently working to arrange more events in the upcoming months with speakers in the health care fields and community based service projects to involve Tri-Beta, FHP, and WISDOM members. The goal is to get all the members from the groups motivated to pursue their interests and even if just one person is deeply impacted by the programs and events we host, we have done our job and paid it forward. 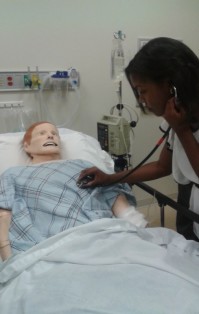