“I didn’t know that I wanted to be a Psych major. I thought I was going to be a sports caster and I took a communication class that did not fit with me. I took Psych class, and wow! I didn’t know you could study this kind of stuff.”

Dr. Matthew Kelley is a specialist on Cognitive Psychology, Human Learning and Memory, and Research Method and Statistics. When interviewing Dr. Kelley, he expressed his research interest in Human Memory, Applied Cognitive Psychology, and Decision-Making. He decided to be a psych major when he was in University of Wisconsin getting his undergraduate degree. He went to Purdue University in Indiana for graduate school where he found his interest, which is learning and memory and met with Dr. Jim Nairne, who was a specialist in Memory. 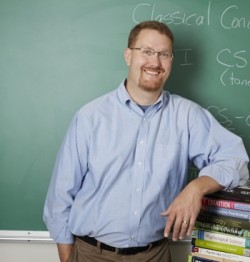 “Once I got into Psych, I thought I was going to be a counselor, so I took a class in concealing and I hated it and while doing mock counseling, I didn’t realize that I didn’t have the patience of it.”

Dr. Kelley realized that his interest was not in counseling but Learning and Memory in graduate school. When interviewing Dr. Kelley, he talked about this current study, which could be useful for mostly students who like to make a study group. His current study is about the effect of collaborating on memory and part-set cueing, which is now on the quarterly Journal of Experimental Psychology. This study shows that these two related facts are counterintuitive to one another. Many people think that two people studying together is always better than one person studying alone, but this study shows that two people studying together are not as effective as two people who study alone and then combine what they remember. There is a cost; a memory cost while working with someone else. This study provides the main theory about disrupting the retrieval strategy. For example, someone gives you a list of words to you to remember, and you are a kind of person who makes up a story and tries to recall the list of words by relating the words with your story. Another person will rehearse the last few things; while collaborating, this person remembers the list by recalling the last few words, which confuses you when you are trying to remember from the beginning and vice versa.

Many people when offered hint, obviously take it, however another recent study done by Dr. Kelley and his undergraduate students performed a study called part-set cueing, which shows that hints often hurt memory. For example, if you are given a grocery list and you get list of 10 things on sheet of paper and you have to remember other stuff according to those 10 things, which is worse than giving you a blank sheet of paper. This study shows that you remember greater percentage of things when you do not have the hints. Dr. Kelley and his Lake Forest undergraduates have been trying to see if this study extends to other areas in memory because it has been mostly looked at verbal things, stories, and sentences. Now, they have been looking in spatial memory and they saw that cueing actually helps in case of spatial memory. From this study, one should know whether to choose the given hint or not by figuring out what kind of task is given, that is whether it is spatial or not. If the task is verbal then one should not take the provided hint and if the task is spatial then the hint is helpful and one should take the hint.

“It’s really fun to work with students here and it’s really easy to involve them in these projects.”

In order to do the projects, Dr. Kelley involves Lake Forest Undergraduates but in case of large group of participants for the study, he gets help from his colleagues from different institutions and gets enough participants for his studies. Most of his projects involves Lake Forest students where they co-author papers and co-present the study. Dr. Kelley already published article with 18-20 students who are co-authors with him and another 20-25 students have been to conference with him. Students help them collect the data and students help him to analyze the collected data. He gets the participants for his study mostly from Psychology 110 students by offering them extra credit for participating in his projects.

Dr. Kelley who did not know anything about psychology until he was a junior in University of Wisconsin and who wanted to be a sports caster have already published more than 20 of his studies and have been to more than 20 presentations. Being a first generation college student, he has been doing an exceptional job of being a professor and a researcher and has been educating students and world about memory and Cognitive psychology through his lectures, presentations and his articles.