Dr. Robert B. Glassman: A Man of Passion, Knowledge, and Friendship

Forty-four years ago an exceptional man, vibrant and full of knowledge began his legacy of inspiring the young minds of Lake Forest College. Dr. Robert B. Glassman or Professor Glassman as most students called him and referred to as Bob by his colleagues, touched the lives of thousands of students. For most, he was merely a professor, but for others he was an advisor and mentor. In addition, for a few students that were fortunate to have the opportunity to work in his lab, he became a father-figure, a friend, and an ally. His passion was to teach, to research, and to push everyone to learn and explore beyond their means, particularly within the realm of neuroscience and psychology.

His courses stood out amongst other college courses in that he explored the material with his students in the form of discussions and demonstrations that pushed students beyond the confines of the classroom. Professor Glassman continuously shared his own knowledge of the material and learned a great deal along with his students through the discussions they had. His unorthodox method of teaching represented his passion for learning and his philosophy that we learn best through discussions and debates instead of just accepting what a textbook taught us.

Professor Glassman was unequivocally dedicated to his students. He never failed to support a student that was willing to work hard and achieve their goals. His office door was always open to students in seek of academic help or even advice on life. Academically speaking, he was the ultimate advocate, and went above and beyond what was expected of a professor in taking a key interest in each and every one of our lives. Professor Glassman enjoyed conversations with his students. Often times we would stop by his office to say ‘hi’ and ‘chat’ for a half-hour or so about whatever came to mind. He was also constantly speaking with students who had an interest in neuroscience. Usually, an interested student would come into his office and as Professor Glassman spoke with the student, he would pull out an empty flash drive and fill it with articles, papers, posters, programs, radio snip-its, etc. all of which were related to neuroscience and other topics of interest such as religion or music. 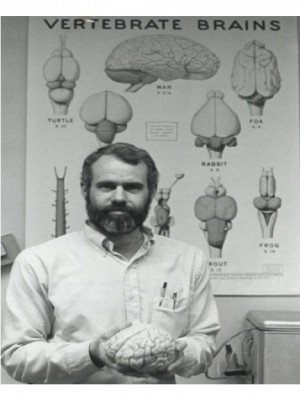 Professor Glassman was always excited to spark interest in students following a career path in Neuroscience or Psychology, but he also inspired his students to be curious and to follow their own passions, just as he did. This was particularly true for those students who worked in his lab during the summers. His lab was very different from others in that there were at least 5 students working there, ranging from freshmen to seniors and from all regions of the world. This made his lab a unique and diverse place in which friendships grew and an abundance of knowledge was gained. On a typical lab day, the students would arrive around 8 or 9am and would work on data analysis, prepare the necessary documents for a new experiment, or check on the rats. Shortly after that, Professor Glassman would arrive and would excitedly show us a new LabVIEW program – a type of software that works with data - he had worked on all night. When he found something that he was really passionate about in the program, he would talk for hours without pause, while we tried and often time failed to keep up! Before we knew it, it was lunch time and when we returned in the afternoon, we would all continue to work on the new LabVIEW program together or collect some data. It was not uncommon for us to spend an entire day in the lab just talking about something interesting and insightful. Professor Glassman was a well-educated man with an interest in a wide range of topics, including religion, philosophy, culture, language, music, and science. Therefore, our discussions spanned a very wide range of topics, some of which were not at all relevant to the work we were doing, but were fascinating nonetheless. Regardless of what we worked on, each day was educational and well spent.

Professor Glassman enjoyed combining multiple disciplines such as religion/science, music/science, computer science/neuroscience, physics/psychology to satisfy his curious mind. He never kept these interests to himself.  He was always trying to recruit someone to get as equally interested in a topic and jokingly help him win the Nobel Prize. He often held book clubs with his summer interns on the lawns of the college or by the beach. Scrolling through hundreds of pictures on the daily click one could see that he always took advantage of a warm and sunny day to have his class discussions outside. This was a breath of fresh air for many students.

In addition to his endearing support in both the classroom and lab, Professor Glassman not only inspired us to live to learn, but to also learn to live. Even in the past few years, he went to a Neuroscience conference in China- he encouraged traveling and seeing the world, learning about science in not just our own culture, but in others as well.  He was always in the middle of teaching himself something new, such as Spanish, Chinese, or Calculus, and he fully embraced learning simply for the sake of learning. It was irrelevant of someone’s age or previous experience in a subject. He cared more about a student expanding their own interests, leaving one’s comfort zone for a new adventure and experience, and learning to let go of doubts and insecurities. Professor Glassman desired that students graduate from Lake Forest College not only prepared to succeed in various graduate programs and career paths, but also to enter the world with a confident and excited attitude, ready to live life to the fullest.

Humor was another area of expertise for Professor Glassman. He never failed to have the spotlight on him in terms of his spontaneous jokes. If you saw his office door, it was covered in comics. Also, every semester, he would walk into class one day wearing a graduation cap, the size of a small coffee table, to represent the surface area of the brain. He always found a way to relate to everyone by tailoring his jokes to their personal preference. Professor Glassman knew his students very well and valued building those connections with his students in order to help them achieve their goals and discover their dreams.

Even though he could be silly, he was a very genuine, caring, and honest person. He was never afraid to speak his mind and to admit that he did not know the answer to a question. Professor Glassman also remained devoted to his students from the moment we stepped into his office even just to express our interest in Psychology and Neuroscience. In fact, when you chose to work with him more closely, you not only gained an advisor but a true and life-long friend. His students were of utmost importance to him, and he invested himself in helping them achieve their goals. Professor Glassman never turned students away who were willing to put in some effort. Furthermore, he designed his lab in a way that promoted discussion and the development of friendships. Every summer he would have his students over to his house for dinner with him and his wife, Harriet. This was always a wonderful time as we had the chance to get to know each other and feel the support of those around us.

For these reasons, we all know that Professor Glassman never could have retired. He was far too passionate about teaching, doing research, and helping others. Professor Glassman left us doing the thing he loved the best, and we have no doubt that he was satisfied in doing so. It is with this thought that we can look back on his life and thank him for every little thing he did for all of his students. In the midst of this reflection we will remember not only the kindness and generosity he shared, but also his spontaneous jokes and vast knowledge that made him so unique. We will also remember the tremendous passion he had for what he loved. Professor Glassman’s strong legacy will live on, not only in the history of Lake Forest College, but also in the passion of every one of his students for what they love and the passion they share through friendship and scholarship.