Disturbed environments undergo a transition as recovery proceeds (Roxburgh et al., 2004). The intermediate disturbance hypothesis assumes that diversity is driven by species adapting to the trade-off between tolerating fluctuations in environmental conditions and competing for resources (Jiang & Patel, 2008; Kadmon & Benjamini, 2006). Due to these differences in adaptation, the potential coexistence would not be completely determined by competitive advantages and may come about by a variety of mechanisms (Roxburgh et al., 2004). Resulting species composition and richness were also shown to be influenced by the order in which new species colonized the post-disturbance environment (Jiang & Patel, 2008).

Bacteria on the human body are subjected to many of the same factors that play into the species richness under the intermediate disturbance hypothesis, such as exposure to disturbances of varying intensity and duration, colonization and degrees of tolerance to different environmental stresses (Fierer et al., 2008; Grice & Segre, 2011). While bacterial communities have been shown to differ between sites on the human body, the factors that determine this diversity are still poorly understood (Fierer et al., 2008).

In order to test the intermediate disturbance hypothesis, we studied the bacteria living on similar exposed surfaces of the human body of male and females under the disturbance of washing. The maximum disturbance was represented by the back of the hands, which are subjected to constant scrubbing and exposure to soap. Minimal disturbance was represented by the inner forearms, which are usually disturbed when washed once a day while showering. It was thought that the cheek lies somewhere in between these two extremes, usually being subjected to a moderate amount of disturbance of washing just a few times a day. Therefore, cheeks should show significantly higher species richness than the back of the hands or forearms. All three of these surfaces are characterized as dry, external environments. We also predicted there will be no differences in diversity between males and females of these surfaces. We sampled these areas of the body to determine patterns of species richness, abundance, and species diversity on the human body.

We sampled 20 young adults, 10 males and 10 females, at Lake Forest College in late March and early April of 2013. Q-tips were rubbed thoroughly on areas of interest (back of the hand, inner forearm, and cheek) for approximately 5 seconds in order to collect bacteria. It was noted when the participants last showered or if they wore make up or had facial hair on the sampled surface, as these factors may affect the growth and community composition of bacteria. Samples were collected from the same side of the body. We swirled the contaminated end of the Q-tip in a microfuge tube filled with 0.5 mL of PBS solution and chilled the tubes in a refrigerator for 24 hours. Each tube was then shaken and 50 μL of solution were pipetted out and diluted into a second microfuge tube filled with 0.95 mL of solution. We pipetted 50 μL of solution from the second tube and applied it to the surface of a TSA plate. The mixture was evenly spread over the plate surface with 5-7 sterile glass beads and left to incubate at 36°C for 6 days.

We counted and classified the grown bacteria into morphospecies by the color and texture of the colonies. We used a 2-way Anova to test for differences between areas for species richness, abundance, and species diversity. Species diversity was calculated by using the Shannon-Weiner Diversity Index.

We observed 621 colonies comprised of 15 morphospecies (Fig. 1). Two morphospecies classified as “white, shiny” and “grey, dull” were the most abundant, comprising 17.7% and 60.3% of colonies respectively. Only one species was represented by just one colony. 14 of the 60 plates exhibited no growth of bacterial colonies. Of our participants, seven of the females were wearing makeup, four men had facial hair, and 13 showered the morning of sampling, while five showered the morning before. 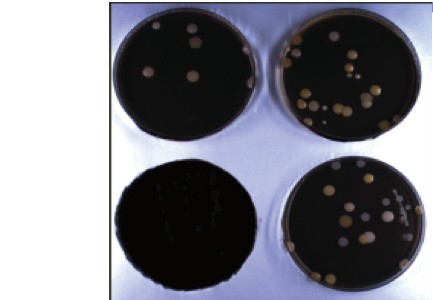 Figure 1: A sample of cultures. Clockwise from the top left: hand, forearm, cheek, and no culture present. 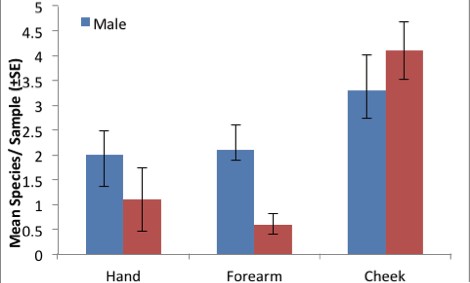 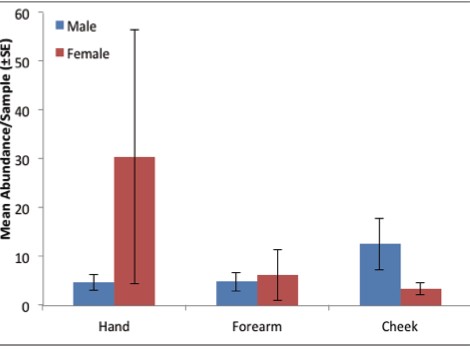 Figure 3: The mean abundance of colonies per sample for surface and sex. There was no observable trend.

Our predictions were supported for species richness and species diversity, both of which follow the pattern for the intermediate disturbance hypothesis. We fail to reject the null hypothesis for the abundance of colonies for each surface. We also fail to reject the null hypothesis for the abundance differences by sex. The average for all measurements showed initial differences among the three surfaces. While the cheek was highest in average species richness and species diversity, the variation the variation of measurements between the hand and forearm could be due to environmental differences other than the level of disturbance. Differences between sexes in these measurements were apparent, and may be due to physical or behavioral factors. At intermediate disturbance, the gap in measurements between males and females closes, which means disturbance at this level may cancel out any effects that contribute to differences in sex.

The removal of the outlier for abundance made the made the male cheek have the greatest abundance of bacterial colonies. This inconsistency and lack of significance between surfaces for abundance may be due to several factors. Disturbances have a unique effect on each species, of which some will suffer greater reduction in their populations than others (Roxburgh et al., 2004; Shea et al., 2004). Therefore, the insignificant differences in the bacterial colonies could be due to the abilities of a dominant species being compromised by disturbance, leading to a more equal distribution of populations. The opposite trends in the abundance for males and females among surfaces are possibly due any differences in the environment dependent on sex.

Subtle differences in the physical traits of areas of the human body could affect the factors that shape the intermediate disturbance hypothesis. The skin of a human can be categorized into habitats by the presence of hair follicles, secretion of salt and water, temperature, humidity, and topography (Costello et al., 2009; Grice & Segre, 2011). These factors were not accounted for in our study and almost certainly have influence on bacterial communities. The dry surfaces of the human body, including the forearm, tended to be more diverse (Grice & Segre, 2011). The diversity of the forearm was usually higher than the hand, especially for men. Men tend to have more acidic skin and produce more sebum, both of which tend to lower bacterial diversity (Fierer et al., 2008). However, males were higher in our measurements of species diversity, so this doesn’t seem to be a viable cause. Yet, other sex-specific factors, such as the production of sweat and hormones, may be possible factors (Fierer et al., 2011).

The presence of either facial hair or makeup over the cheek may have created a different microhabitat than the arm or hand and could alter the effects of disturbance. Facial hair could act as a barrier to minimize the disturbance of washing and present more of a heterogeneous environment. Stability and structural heterogeneity have been attributed to an increase in species richness by allowing organisms to evolve into new forms with little extinction and specialize within a structurally varied environment (Pianka, 1966). Makeup could act as a barrier that traps heat and moisture to the underlying skin. High temperatures and humidity are said to promote diversity, and environments of the human body with these traits were found to have greater quantities of bacteria (Grice & Segre, 2011; Pianka, 1966).

Behavior of participants could affect the diversity of bacteria at the time of sampling. Time between disturbances is a factor in the ability of a community to persist through a disturbance (Shea et al., 2004). This factor is represented by the how long it had been since the participants showered before sampling. The time since hand washing has a significant effect on the community composition of bacteria, but not diversity, and females were more likely to have washed their hands recently (Fierer et al., 2008). The mean species richness of our participants increased with time since they last showered, while greater abundance was observed from participants who showered the morning of sampling. However, it is unknown what effects hand washing had on the hands of our participants, as they all sampled at least an hour after washing their hands. Frequencies of hand washing have been observed to differ by sex and may explain the differences in diversity between males and females. We assumed the surfaces sampled for bacteria came into negligible instances of contact with foreign surfaces. Any increased contact with foreign surfaces would offer more opportunities for bacteria to colonize a post-disturbance environment and establish themselves in the new location (Fierer et al., 2008; Jiang & Patel, 2008).

Understanding the factors that drive patterns of diversity for bacteria on human skin may hold the potential for the treatment and prevention of skin disease. Alterations to the composition of bacterial communities on the skin have been known to cause infections and disorders (Grice & Segre, 2011). Washing as a means of hygiene has been shown to be a possible mechanism for the propagation of bacterial diversity. This resulting diversity may influence the ability of a pathogen to infect a host. The opening of niche space that arises out of a disturbance facilitates the establishment of new colonizers to a community, and it is possible that this may also apply to pathogens (Jiang & Patel, 2008). However, greater diversity from intermediate disturbance may also suppress species that lead to disease (Grice & Segre, 2011). If the effects of high skin bacteria on pathogen colonization can be determined, it may be possible to use our skin bacteria as a form of biological control that can evolve with diseases. In order to truly further our understanding of skin disease, normal states of bacterial communities must first be ascertained (Costello et al., 2009; Fierer et al., 2008).

A more accurate pattern of bacterial diversity on the human body may be determined in future studies. A larger sample size would compensate for any outliers and could provide a more complete collection of bacterial species that occur on the human body. Other variables, such as facial hair or makeup, sex, and time since showering should be held constant to eliminate their possible effects on the response of bacteria to disturbance. Comparisons between variants of these factors would make a great study for the types of environment that lead to diversity and if diversity is more likely to be the result of stability or disturbance. Understanding these factors may explain why surfaces with the most and least disturbance still showed differences in diversity. Washing seemed to act as an adequate disturbance, but it is worth investigating what other types of disturbances, such as chemical or abrasive, could result in the highest diversity at intermediate levels.