Colors play an important role in the way that organisms behave in their environment. Colors attract and deter different organisms depending on their color preferences and experiences. For instance, flowers that are red are more attractive to hummingbirds than yellow or blue flowers (Pickens, 1930). In other organisms such as frogs, bright colors are a signal for poison (Siddiqi et al., 2004). Male guppies with brighter colors are more highly preferred by female guppies (Kodric-Brown and Nicoletto, 2001). In addition, both sexes of guppies have been shown to be attracted to the color orange whether this is in the mating context or in a feeding context (Rodd et al., 2001).

In the experiment done by Rodd et al., guppies were tested to see which color disc the fish were attracted to, which was recorded by counting the number of approaches and packs at the colored discs. We were interested in a similar study, but we wanted to test whether the guppies would make a choice to spend more time near an object that was colored orange versus colored blue. Since Rodd et al.  showed that the fish did prefer orange, we thought that when the fish were presented with two novel objects colored blue and orange, they would prefer to spend more time with the orange object. If there was no preference, we expected that equal amounts of time would be spent near the blue object and near the orange object.

The guppies were placed in a tank (12 in x 10 in x 8 in) smaller in comparison to the one where they were previously housed.  The tank was completely empty, with the exception of gravel covering the bottom of the tank. Paper was used to cover all but the front side of the tank.  The tank was separated into three equal partitions.  On the left and right side of the tank the two different stimuli were introduced, and the middle partition was designated as the non-association zone.  A piece of cardboard served as a cover for the tank, and had two slits at the end to lower down the stimuli.  At the slits of the cardboard, two different thumbtacks were tied to monofilament strings long enough to hang at the bottom of the tank. One at a time, the guppies were introduced to the new system, and allowed to acclimate for two minutes in the new habitat before the stimuli were introduced.  After the two-minute acclimation period, the stimuli were lowered from behind the tank and left in the tank for two minutes.  The time the guppy spent in each zone was recorded with a timer for analysis, and then the guppy was removed and placed back in a bigger tank with other guppies.  In order to analyze the difference in time spent in the association zone of each stimulus, the proportion of time spent in each zone was calculated using the following formulas: 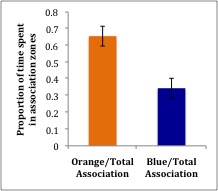 We found that there was a significant difference in the association times that the guppies spent with the orange object over the blue object, which allowed us to reject our null hypothesis.  Our results show that the guppies did prefer the orange object when presented with a choice to spend time in an association area with two objects varying in color. These findings were consistent with previous studies that observed that guppies are attracted to the color orange (Rodd et al., 2001).

We thought that by placing the objects in the tank after the fish had been introduced to the tank for two minutes might cause the fish to notice the objects and make their choice on which object to approach based on their color preference. While the fish did spend more time in the orange association zone, we think that our study could have been stronger if we were to eliminate several factors. Some of the guppies that were place in the tank did not move as much as we expected them to, which could have been due to shock from the change in the water temperature or from being separated from other guppies. If we were to repeat this experiment, we would control the water temperature more closely. It would also be interesting to look at the association time with multiple fish in the tank so see if the preference for orange is seen both in an individual setting and in a group setting.

It would also be interesting to test different populations as well as different species of guppies to see if their color preference is the same. Finally, testing wild guppies versus laboratory guppies might show a different trend due to the fact that wild guppies have different experiences and somewhat different behaviors than fish living in the laboratory.

Note: Eukaryon is published by students at Lake Forest College, who are solely responsible for its content. The views expressed in Eukaryon do not necessarily reflect those of the College. Articles published within Eukaryon should not be cited in bibliographies. Material contained herein should be treated as personal communication and should be cited as such only with the consent of the author.