Fear comes in all shapes and sizes. People are afraid of creepy crawlies, of failing, or even death – things we can physically see and mentally feel. But how about the creatures on a smaller scale, say a microscopic scale? We are so focused on protecting ourselves from the bigger things daily, that microbes - bacteria and parasites - are never thought of, unless of course, you happen to be a microbiologist!

Spending a semester taking a Microbiology course has completely changed my outlook on life. The course consisted of a lot of reading – a textbook as well as Scientific American articles, and daunting stories of victims who survived serious, almost fatal bacterial infections. To go along with the readings, the class watched movies about yet more frightening bacterial and parasitic infections. These infections were caused by simple means – by not washing hands or walking in an infested region barefoot. Even though the class unanimously agreed about the videos being disturbing, the general response appeared in the way we changed our daily habits. We began washing our hands more frequently in a day than had been done in the past. In a haste to keep our bodies free of unwanted pathogens, classmates who paid visits to their physicians over the duration of the semester reportedly asked their doctors to wash their hands before examination or treatment.

Till date, infections arise that are unknown to doctors and scientists alike. Learning that bacteria have become resistant to various antibiotics sparks a concern among scientists as well as patients. Economic and scientific issues are causing drug development chaos and uncertainty. There is a very limited amount of money available for research, and with equipment and materials being rather expensive, the money is sometimes insufficient to carry on years of research. Also, scientists have to develop drugs that are affordable to consumers – especially in third world countries. Science, on the other hand, is still unaware of many types of bacteria and parasites that are lurking the Earth. In creating antibiotics, scientists need to recognize the difference between broad spectrum and narrow spectrum. There are only specific antibiotics that will get rid of certain bacteria. Hence, the ambiguity between economic and scientific issues has proven to be more chaotic than beneficial.

Personally, I have reached the point of obsession with being overly hygienic. I go through bottles of hand sanitizer or liquid soap in a month; my laptop is cleaned and disinfected almost every other day; my dorm room is swept and swabbed as often as possible; and laundry has now become a weekly chore for me.  Another reason for my preoccupation with hygiene as well as diet is bacteria that are known as opportunists. Opportunists are defined as the body’s normal biota that turns pathogenic under favorable conditions. Although these pathogens only infect hosts with a compromised immune system, maintaining a steady hygiene and a well-nourished diet will keep the body and the immune system healthier longer.

Although we hear only of the unwanted bacteria and pathogens, there are a number of beneficial bacteria. Bacteria such as Lactobacillus acidophilus and Bifidobacterium animalis are used as yogurt and cheese ingredients. Trillions of good bacteria house themselves in the human body especially in the digestive tract. From breaking down starches to renewing the walls of the digestive tract to making Vitamin K, these bacteria do it.

Even though I’m in love with these mysterious creatures, if you asked me what I was most afraid of, I would say microbes! It sure seems a little silly to be afraid of creatures so much smaller than humans. However, having knowledge of the science behind the way microbes function and the known and unknown infections they are capable of causing, I would use caution.

Has this article terrified you? Well, you too, can start taking precautions by simply starting with washing your hands and maintaining a good hygiene. 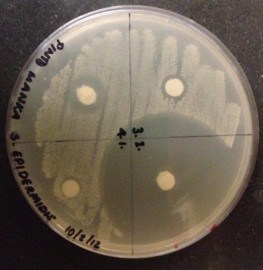