Group size in an imperative factor in determining an individual’s behavioural actions and applies to all organisms in the animal kingdom. Different group sizes come with varying benefits and threats forcing the animal to accept them or find a group size that suits its needs. Behaviours, such as, standing, walking, sleeping and foraging are a part of shorebirds’ daily routine, yet the frequencies of their occurrence visibly vary with the group size of the flock. This study statistically investigates the differences of frequencies of such behaviours in black-winged stilts as a response to group size. The analysis revealed that individual birds spent less time standing than birds in groups, and that the percent of birds sleeping and the number of birds in a group had the strongest linear relation. Additionally, as the group size increased, the dominant behaviour changed from walking to standing to sleeping. The findings of this article are merely the beginning of uncovering the depth of the impact that group size has upon pied stilts’ behaviours and should be further expanded.

Establishing a connection to a group of a particular size will result in certain benefits and risks which will determine the lifestyle of the animal. Benefits could include increased breeding success due to better protection against predation risks, such as in colonies of guillemots, Uria aalg; or a increased survival due to a better chance of catching a pray, as in the case of Hyenas’(Crocuta crocuta) group hunts of zebras (Davies & Krebs, 1993). Risks could include greater visibility, which could attract more predators, or faster exploitation of available resources. For instance, the more elaborate nests of group living fieldfares attract more predators than the nests of solitary birds (Andersson & Wicklund, 1978). On the contrary to nests, however, it has been shown that shorebirds living in a flock, as opposed to solitarily birds, are more protected against predation from different praying birds (Page & Whitacre, 1975). Shorebirds, especially migrant species, tend to associate with a group of a certain size, which will then direct the balance between the benefit of gaining as much energy from nutrition as possible, or maximizing the rate of resource depletion (Evans, 1976). This decision making process can be observed through the frequency of behaviors exhibited by pied stills who occur solitarily and in groups.

This study focused on the differences in standing, walking, foraging and sleeping of pied stilts within different group sizes. Miranda coast is an excellent study site for internal migrants like pied stilts, because its extensive mud-flats serve as their ideal foraging ground, while the “tidal flats and mangroves between Miranda and Thames support over 40,000 birds” (Department of Conservation). The feeding and roosting sites present along the Miranda’s coast serve as a vital stop for a lot of migratory birds, making the Firth of Thames one of New Zealand’s three most important coastal stretches for shorebirds (Department of Conservation). Since feeding is an important task for migratory birds, it was hypothesized that solitary birds would spend more time walking and eating/foraging to minimize predation risk and maximize energy gained from food, while birds in groups would spend more time standing in one place and sleeping/resting because of the advantages of group size. It was hypothesized that solitary pied stilts would forage more consistently throughout the entire day, than stilts in groups, who can use their time in the afternoon to relax, due to a bigger flock size and consequently smaller predation risks.

The behavior of the observed birds was initially numerically classified in the following categories: 0-sleeping/resting (bird’s head is tucked into its wings), 1-standing, 2-walking, 3-grooming, 4-eating (bird throws its head back to swallow), 5-change of location, 6-foraging (bird dipping its beak in the water/toward the ground), 7-spreading wings, 8-excreting waste, 9-aggressive behaviour. The method used was the instantaneous and scan sampling technique, where the behavior of each bird observed was recorded at 30 second intervals for a duration of 5 minutes. Although this technique was used as a sample of events, due to instantaneous categorization, the data was still representative of the overall pattern of behavior. Birds were first classified according to social alliance: solitary or in a group. Later, they were then artificially categorized based on the group size: 1-solitary bird, 2-group size: 2-14 birds, 3-group size: 15-24 birds, 4-group size: 25-60 birds.

All observations and measurements were acquired using University of Auckland’s equipment. A telescope firmly stabilized on a tripod, at a range of approximately 50-100 meters, was used for the naturalistic observations for each bird. A stop watch was used to measure the 30 second intervals and indicate the end of the 5 minute observation period. All of the behavioral data were recorded as numerical values representative of the previously established behavior units. Because the spectrum of recorded behaviors was too broad, the data was re-coded, by creating more concise behavioral categories: 0-sleeping/resting, 1-standing, 2-walking, 3-eating/foraging. The newly coded data was then converted to percentage values by calculating the rate of the occurrence of the behaviour throughout the 5 minute time interval. This conversion broadened the analysis from event based to state based. The data was further analyzed using SPSS.

The four behaviors were analyzed in relation to the actual group sizes as a function of the linear regression model (Fig. 3). The percent of birds sleeping and resting had the strongest linear regression relation with a R2 value of 0.503, while standing, walking and foraging yielded R2 values of 0.003,0.092, 0.095 respectively.

In order to analyze if the time of the day had an impact on any of the behaviours an independent t-test was performed. Overall, birds spent more time sleeping in the morning, (t=2.527, df=48.317, p-value=.015), and foraged more in the afternoon (t= -3.414, df=37.064, p-value=.002). Nevertheless, these results could be skewed by the fact that there were unequal numbers of data gathered for birds at these times: 23 birds in the morning and 33 in the afternoon.

Depending on the size of the group analyzed, different trends and statistically significant results emerged. Whether the individual birds were compared to a group, or a group category, there was a significant difference in the amount of time that the birds spent standing. Since solitary birds are more prone to predation on their own, rather than in a group, they have possibly adapted to engage in a more active lifestyle, rather than spending their time standing and scanning the territory. In 1980, Brian Bertram found that although individual birds may scan more than birds in a group, the overall proportion of time when one ostrich in a flock is scanning increases with group size (Bertram, 1980). Since ostriches raise their heads at random times, it makes it impossible for lions to predict the appropriate time to strike (Bertram, 1980). Although, the head bobbing movement of pied stilts was not analyzed, the time standing and being alert could serve as a comparison to a scanning method.

Individual birds are at a greater risk of predation, which is why they need to be quick in gathering their food and constantly moving, as opposed to birds in a group who can divide responsibilities. This can be supported by significantly more individuals walking, rather than birds in groups of 15-24, as well as an increased number of sleeping birds in groups of 25-60. Since larger groups decrease dilution and provide greater cover more individuals in a group can allow themselves to sleep, especially if the predation rate is inversely related to colony size, as exhibited by a study done on long distance migrants - Monarch Butterflies (Davies & Krebs, 1993; Brower, Calvert, & Hederick, 1979). Although there were no significant differences in foraging strategies based on group size, the slightly increased foraging behaviour of the solitary birds could be explained by the high cost of interference (Davies & Krebs, 1993; Evans, 1976).  Since solitary birds feed off of the pray that they detect on the surface of the mud or water, greater distances between birds are more advantageous (Davies & Krebs, 1993; Evans, 1976). However, this distant solitary foraging may be specific to shorebirds, because others birds, such as Rooks, eat more in the presence of others nearby (Clayton, Dally, & Emery, 2008).

The impact of time of day on sleeping and foraging behaviour could be explained by the availability of the prey. According to Pierce, due to the inability of pied stilts to get to the Deleatidium larvae that may be under stones during winter and early spring, there is greater foraging activity in the afternoons (Pierce, 1986). This is consistent with this study’s finding, as well as territorial characteristics of Miranda and the occurring spring season.

Overall, the hypotheses were partially supported. Solitary birds walked more than grouped birds who exhibited more resting behavior. However there was no significant difference in the amount of foraging. The results acquired based on the impact of time, refuted the hypothesis, and it was shown that the afternoon was a more dominant time to forage for solitary and grouped birds. This study had limitations due to its short duration and limited sample size. Nevertheless, the impact of group size needs to be extensively investigated because it is one of the key components to understanding the reasons behind animals’ actions.

I would like to thank all of the tutors that attended the Miranda field trip for their help with developing this study and guidance in using the equipment needed for the collection of the data. Additionally, I would like to thank Professor Gregory Holwell for his help with the data analysis, as well as his initial pointers and guidance in developing the tested hypotheses. Special thanks to the Miranda Naturalist’s Trust for hosting us during the duration of the study and teaching us about shorebirds.

4. Evans, P. R. (1976). Energy balance and optimal foraging strategies in shorebirds: some implications for their distributions and movements in the non-breeding season. Ardea, 64, 117-139. 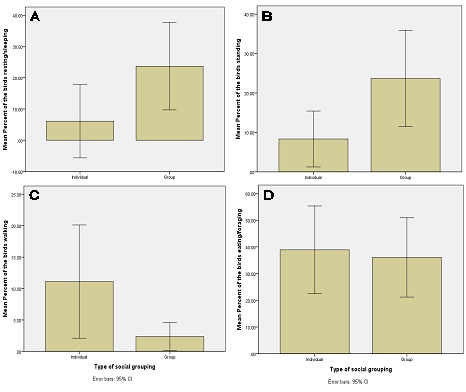 Figure 1. This figure graphically represents the mean percent amount of activity for each type of behavior (y-axis) in relation to the type of social grouping (x-axis). The individual graphs represent the following: A) data for resting/sleeping birds, B) data for standing birds, C) data for walking birds, and D) data for eating/foraging birds. 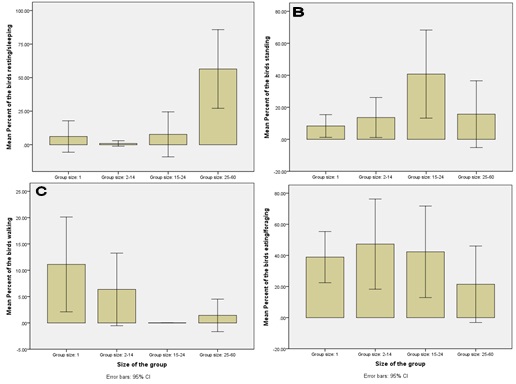 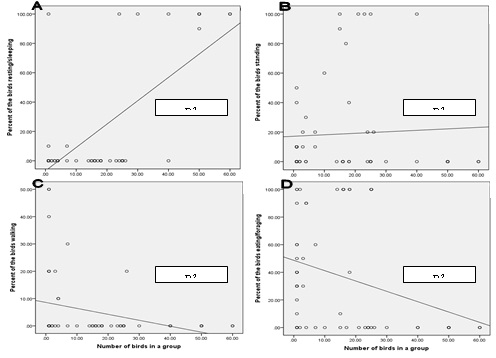