All living things need energy to survive. Animals have a variety of mechanisms to acquire energy in the form of food. Organisms may produce their own food, or they may obtain it by consuming another organism. If an individual does not produce their own food they must usually track or scavenge for a food source. One specific food acquiring mechanism is that of foraging. In order to further the understanding of foraging behaviors, the gray squirrel was used as a model organism.

Gray squirrels (Sciurus carolinensis) are an easily observable species that has habitats across both urban and rural areas (Bowers and Breland 1996). In order to obtain the nutrients and energy that they need, squirrels must usually expose themselves by leaving the protective habitat of the trees to collect nuts and food in open or grassy clearings. By foraging in these field patches, squirrels are at higher predation risk (Lima et al. 1985, Dill and Houtman 1989). The risk of predation may be dampened in human populated areas (Bowers and Breland 1996). Humans tend to hunt or frighten away potential squirrel predators allowing them to forage for longer stretches of time consequently allowing them to collect more resources (Bowers and Breland 1996). However, predation and energy reward (in the form of food) is not the only tradeoff that squirrels must make when obtaining food.

A squirrel must also determine whether or not a particular resource is worth the effort to forage (Abu Baker and Brown 2009). It is not beneficial for a squirrel to spend more energy collecting a food than it will receive from that food’s consumption. In naturally observed areas, (Lewis 1980) noted that gray squirrels had a preference for a particular type of chestnut despite its abundance. The energy reward for the nut may have been so great that despite its low abundance in certain patches, it was still desirable to forage (Lewis 1980). These tradeoff evaluations must be done very quickly in order to make the most efficient use of foraging time.

In order to further understand the behaviors of foraging, we conducted two experiments. Each experiment attempted to quantify the decisions through the use of GUD’s (giving-up densities). GUD can be determined based on how readily the squirrels give up foraging given a certain circumstance such as an obstacle or a predator. If there is more food left over with one variable present compared to another, the GUD for that scenario is higher. GUD’s will allow us to determine when squirrels evaluate the risk greater than the reward offered. By conducting the following experiments, we hope to add further support to the existing knowledge of foraging theory.

The first experiment focused on the grey squirrels’ evaluation of the expenditure/reward system. By manipulating the surrounding area, we may make squirrels expend more energy than normally required to obtain food. We hypothesize that if squirrels have to expend more energy than normal to acquire food, the GUD of that system will be higher than that of a normal energy expenditure system. This pattern should be observed because squirrels should recognize that getting to the food is not worth the amount of energy available (Abu Baker and Brown 2009). Although we attempted to eliminate confounding variables, dogs were frequently observed during sampling periods. This led to the formation of our second hypothesis and experiment.

To observe the effects predators apply to foraging, we set up an artificial predator near a resource pile and left one without a predator. We expect that the resources near the predator remain untouched or only slightly eaten (high GUD) while the resources lacking a predator will be far more utilized. This behavior should occur due to the predator risk tradeoff that has been previously observed (Lima et al. 1985, Dill and Houtman 1989). It is also worth mentioning that the aforementioned experiments were held in a suburban environment, which may have had adverse effects on squirrels’ behavioral response to predators (Bowers and Breland 1996).

Both experiments used 26 x 53.5 cm green trays to hold a premeasured amount of critter mix made up of corn and sunflower seeds in about 1 liter of sand. Sampling took place in Forest Park in Lake Forest, IL. Trays were placed at a distance of 2 meters from a tree in a sparsely treed open grass habitat. Samples were conducted for one hour between 12 p.m. and 4 p.m. Samples were observed to identify forager species.

In order to ensure squirrels had to expend more energy to get to one of the resource trays, one tray was placed on a support stand within a kiddy pool filled with water. The pool was filled three quarters full of water and was sufficiently far enough from the tree that squirrels had to either jump or swim from the pool edge to obtain the resources on the central platform. The control tray was placed approximately 30 meters away from the experimental group and left at ground level. Eight trails were conducted and an independent samples t-test was used to compare the means of the two groups.

Similarly to the above experiment, two trays were used and separated by a distance of 30 meters. A two foot stuffed dog was placed next to the experimental tray to simulate the presence of a known predator within the forest. The flight initiation distance for a squirrel that observes a dog is 26 meters so the stuffed dog should have no effect on the control tray (Gustafson and VanDruff 1990). As a further precaution, the line of sight between the two trays was broken in an attempt to prevent squirrels from observing the artificial predator. Ten trials were conducted and the means were compared through use of an independent samples t-test.

Upon completion of the experiment and analysis of the data, figure one showed no significant difference between the pool (high energy expenditure) and the control (normal energy expenditure) trays (t(14) = -2.049 p = .06). During this experiment only one trial observed the foragers to be squirrels. In all other data points, crows were the primary foragers of the resource trays. Dogs were also present sporadically over sampling periods..

Upon completion of the second experiment and analysis of the data, figure two showed that there is no significant difference between GUDs in the presence or absence of a predator near the trays of food (t(18) = -.470 p = .644). Only one trial observed crows as foragers. All others had squirrels as primary foragers. One trial had a free roaming dog near the control tray. 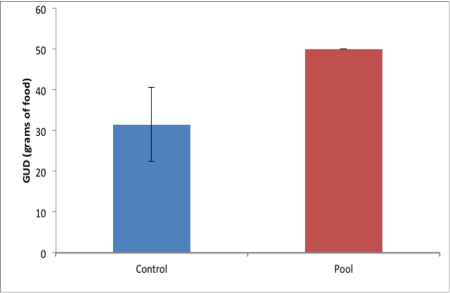 Figure 1. Average GUDs for each of the treatments (control/pool). High GUD represents greater food remaining. This data shows that there was no significance in the energy assessment of squirrels. 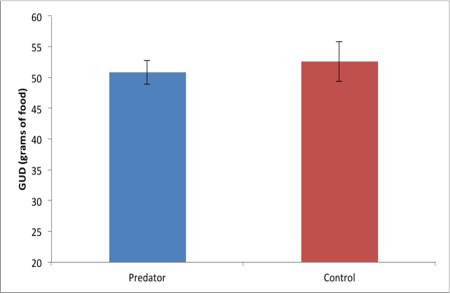 Figure 2. Average GUDs for each of the treatments (control/predator). Higher GUD represents greater food remaining. This data shows that there was no significance in the risk assessment in squirrels.

Many different factors contribute to the foraging behaviors of gray squirrels, from energy tradeoffs (Abu Baker and Brown 2009, Lewis 1980), to predator prey dynamics (Lima et al. 1985, Gustafson and VanDruff 1990). Our experiments attempted to further support the research already done on foraging. Specifically, we wished to show how energy tradeoffs and the presence of a predator would influence the GUD’s of foraging squirrels.

The results collected do not support our alternate hypothesis. There was no difference in the GUD of the control or the pool resource trays. This would suggest that risk/reward foraging does not happen in the natural environment. This directly contradicts the concept of optimal foraging (Lewis 1980). Instead of taking a lower risk for the same amount of reward, our results suggest that energy expenditure is not taken into account by squirrels in their foraging pattern.

However, as noted by (Lewis 1980) perhaps their food preference occurred during our trials. Perhaps the critter mix used in the trays was not a preferred food for the squirrels so they elected to forage elsewhere. If squirrels were consuming other resources it helps to explain why crows were attracted to the trays instead of the squirrels. The separation of crows’ and squirrels’ resources would minimize indirect competition between the two species. However, two other species played significant roles in this experiment.

Both dogs and humans were observed to be present during sampling times. This could have an adverse effect on data. Squirrels tend to forage more around human settlements and normally maintain lower GUD’s than in rural areas (Bowers and Breland 1996). Although this did not play much of a role in our data one large impact humans had in our experiment was pets. Squirrels tend to avoid foraging in the presence of pets perceived to be predators (Bowers and Breland 1996, Dill and Houtman 1989). Since squirrels were observed rarely during sampling periods, perhaps the presence of dogs (a potential predator) caused a significant drop in the foraging rates of squirrels in Forest Park. This led to the formation and test of our second hypothesis.

The results collected by this experiment do not support our other alternate hypothesis. There was no statistically significant difference in the GUD between the control trays and the trays with a predator present.

This is in direct contradiction to previous research, which showed that there was a higher GUD when predators were present due to a predator risk tradeoff (Lima et al. 1985, Dill and Houtman 1989). It is possible that the squirrels did not recognize the plush dog as a predator and were therefore not deterred by its presence. If this were the case, the lack of a sense of predation risk could explain the differences in GUD between our experiment and the findings of previous research. More research must be done on the specificity of predator determination in squirrels to determine if the case of squirrels not generalizing the concept of predatory dogs widely enough to include our predator stand-in.

Bowers M. A., B. Breland. 1996. Foraging of gray squirrels on an urban-rural gradient: use of the GUD to assess anthropogenic impact. Ecological Applications :1135-1142.