With the clanging of what sounded like cowbells, we were ushered into Grace Auditorium, embarking on one of the most exciting conferences I have attended to date. It was the first lecture of the four-day 2011 Telomeres and Telomerase meeting at the prestigious Cold Spring Harbor Laboratory (CSHL). This was an especially significant year since it was the first CSHL Telomere meeting since Elizabeth Blackburn, Carol Greider, and Jack Szostak, pioneers in the field, were awarded the Nobel Prize in Medicine “for the discovery of how chromosomes are protected by telomeres and the enzyme telomerase” (Nobel Media, 2011).

The laboratory is situated on the shores of Cold Spring Harbor, located on the northern coastline of Long Island, NY. The Lab is known for its high level of research and scholarship; I imagined myself mingling with some of the greatest minds in the scientific world. My imagination was soon reality, and, within minutes of my arrival at the labs, my advisor Dr. Karen Kirk, who accompanied me on this trip, introduced me to her mentor and Nobel Prize winner, Liz Blackburn.

Having participated in other conferences such as the Argonne National Laboratory Undergraduate Symposium and the American Society for Cell Biology Meeting, I thought I was well versed on the set up of such meetings. However, my expectations were disproven. Instead of being seated in a conference hall the size of multiple football fields that had a speaker nearly invisible to the majority of the audience, all the participants of the CSHL meeting fit comfortably into an auditorium with a very visible speaker. The scientists here jostled to greet long-term colleagues and friends with embracing hugs and wide smiles, rather than the regular scramble to capture seats that I had witnessed at other conferences. The most distinctive feature about the lectures at the CSHL Telomere meeting, however, began to seep into my mind during the Q&A period that concluded the talks.

At this time, the microphone was bounced around between occupants of the front rows of the auditorium. It must have been the smaller size of the audience that allowed for them to not only ask engaging questions but also to make encouraging comments to the speakers. Often neighboring audience members would kindly lean over and remark in agreement—an act I had not witnessed in other much larger and impersonal conferences. I soon noticed that it was not only the smaller audience size or the eagerness to ask questions that set this meeting apart; there was also an unusually large number of women in the room.

The second day of the conference further enhanced my observations. It was the first session of poster presentations, and graduate students proudly toted their poster holders across their backs with a striking similarity to what archers might look like carrying their arrows. My presentation was scheduled for the second session, so I had the liberty to not be nervous yet. Continuing with my observations from the previous night, I noted that there was a more balanced gender ratio of graduate students that was not apparent in the female-heavy older generations of scientists in the field. I shared my observations with Dr. Kirk, and I was glad that she mirrored the curiosity and interest I had on this subject. 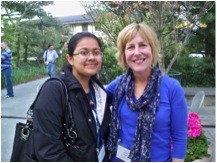 Saajidha Rizvydeen ’12 and Dr. Dorothy Shippen, PhD, an organizer of the 2011 CSHL Telomeres and Telomerase Meeting

Later that day at a wine and cheese party, Dr. Kirk introduced me to one of the meeting organizers—an established scientist in the field of telomeres and Dr. Kirk’s long-term colleague–Dr. Dorothy Shippen. During our informal conversation, I consulted her on what her thoughts were about a change in the gender ratio of the scientists in the field. Dr. Shippen assured us that our observations were true and unique to the field of telomere biology. She reasoned that this unusual trend was due to the fact that the telomere field was founded and has been spearheaded by females. “Both Liz [Blackburn] and Ginger (Virginia) Zakian were the founders of this field. Their labs attracted strong female scientists like Karen (Dr. Kirk) and I,” she stated, explaining why there were more established female scientists in the telomere field than any other.

Dr. Shippen went on to explain that she recognized this trend in her lab at Texas A&M University as well.  During the early years, there were more female graduate students in her lab; more recently, however, this trend has dwindled. She later answered the question on my mind by sharing with me that she believed that in the next decade no one would be able to recognize this unique characteristic of the field, as she expects the gender ratio to even out. In fact, she pointed out that after organizing three consecutive meetings over the past six years, a male figure would be taking on her role for the next meeting.

Dr. Shippen spoke liberally about the topic, without me having to prod her for answers. She admitted that there was an unspoken reason as to why most of the leading female figures huddled together in the front rows of the auditorium. “I think it’s called the imposter syndrome,” she noted, speaking about a psychological phenomenon where women who have had successful careers are not completely convinced of their abilities and success. “Having distinguished scientists like [Nobel Prize winner] Tom Cech within sight may make women think that they aren’t entitled to their success,” she added. By sitting together, these leading women feel a sense of reassurance and power, knowing that their neighbors and colleagues have mirrored their success.

Looking around the patio where the party was taking place, I began to absorb the message to which Dr. Shippen alluded. I was part of a unique family of scientists. Though I had not chosen to join the Kirk lab because it was led by a female scientist, I now realized how thankful I was to be part of this field. As one of the relatively youngest fields in science, telomere biology has grown rapidly over the years and has gained worldwide attention after it claimed a Nobel Prize. As the only undergraduate at the meeting, I was convinced that I probably had the least impact on furthering this field. However, I am confident that the leading female figures I met during the meeting have inspired me to challenge the boundaries of science and not be hindered by societal or cultural standards.

The Nobel Prize in Physiology or Medicine 2009. (2011, Aug 4) Retrieved from: http://nobelprize.org/nobel_prizes/medicine/laureates/2009/