Current Trends in Neuroscience Education: Chicago Chapter of the SFN

On March 25th, 2011, forty-five Lake Forest College students attended one of the most esteemed neuroscience conferences of the Chicago area. The Chicago Chapter of the Society for Neuroscience (SFN) at DePaul University was attended and appreciated by many undergraduates, graduates, and post-doctorate students of Lake Forest College, Loyola University, Dominican University, Rosalind Franklin University, Rush University, and many others. The aim of the annual conference was to learn and educate students and professors about the current research in neuroscience education. To highlight the emerging neuroscience advances in the departments of pharmacology, biology, chemistry, psychology, and psychiatry, students presented their research on many neurodegenerative diseases and mysteries. Students were most interested in themes related to stress response, Parkinson’s disease, Alzheimer’s disease, and Schizophrenia.  This well-organized event started off with registration and continental breakfast followed by welcoming remarks by Dr. Evan Stubbs Jr. at the extravagant Presidential Symposium.

The wide diversity within the field and the global impact of neuroscience makes research in neurology very demanding and challenging. Neuroscience is especially important now because, in addition to built-in interest in the nervous system, the field has been developing at an increasingly rapid pace. The research and talks at the symposium ranged from investigating the development of the neurodegenerative disease and synaptic plasticity and mechanisms of learning to the consequences of stress on the central nervous system, or CNS.

The first talk at the start of the Presidential Symposium was about “Consequences of Stress on the CNS.”  Acute stress response is the way the body responds to threats and fear. In these talks, students learned about physiological, metabolic, and long-term biological effects of stress on subjects living in different environments. The Presidential Symposium’s first speaker, Dr. Randall Sakai of the University of Cincinnati, presented his interesting research on physiological and metabolic effects of chronic social stress in rats. His research focused on a comparison of the effects of chronic stress on subordinate and dominant male rats. Later, his team researched the outcomes of recovery from social subordination. The results suggested that neurochemical changes associated with chronic stress affect the systems involved in food uptake, metabolism, and weight regulation. The second speaker was Tanja Jovanovic of Emory University of Medicine.  Her research on “Long-term Biological and Psychological Sequelae of Early Life Stress” focused on past histories of trauma and troubled childhoods. Recent studies show that children with histories of trauma indicated transgenerational effects of trauma. The exemplary research and speeches at the conference gave insight into the stress-related environment of the body and its relation to neuroscience. The Presidential Symposium ended with Dr. Herman’s talk on his outstanding work on stress response factors in rats and humans. He talked about many different stress responses and the causes of the onset of stress. He started by distinguishing stress from stress responses. He also touched upon the behavioral actions that trigger stress and linked physiological stress response with homeostasis as a redistribution resource. Students could relate the work of these researchers to lectures on fight or flight response, neurodegeneration, depression, and PTSDs that they had attended at Lake Forest College. 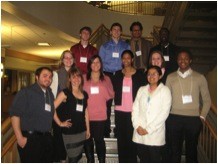 The most popular theme of the conference was on the disorders of the nervous system. Due to the nervous system’s complexity and the advanced technology used in evaluation and treatment of its disorders, the branches of medicine and research opportunities are as numerous and varied as the disorders and conditions they involve. Students had the best experience at the conference by being a part of the poster symposium on Alzheimer’s disease. Alzheimer’s disease is the most common form of dementia and accounts for 60-70% of all dementia cases. Alzheimer’s is not a normal part of aging, and it worsens over time. One of the most interesting undergraduate posters from the Department of Chemistry at DePaul University was by Veronica Perez. Her research on amygdalin as an alternative treatment for behavioral symptoms of Alzheimer’s immediately caught my attention. As I had studied a medical ethics case on Alzheimer’s patients, I was excited to learn about the prevention, treatment, and cognitive symptoms of Alzheimer’s disease patients. Amusingly, there have been very few clinical trials that investigate the impact that amygdalin has on the β-sheets associated with Alzheimer’s. Her team expects to study the impact on the neural cells in the near future.

Another main theme of the conference was the research on the development of various diseases. Advances in the development of diseases are revolutionizing the way we study the brain. One interesting development was on Schizophrenia’s progress from adolescence to adulthood. The specific cause of Schizophrenia is unknown. It is thought to be caused by an imbalance of neurotransmitters, including serotonin and dopamine, in the brain.  Pascal Accoh, a biology major at Lake Forest College, created a poster based on the research he conducted at Rosalind Franklin University for his senior thesis that highlighted the use of cannabis and its association with Schizophrenia. Schizophrenia closely connects to my interests in neurobiology and pharmacology, which I study as a part of my summer research at Rosalind Franklin University. Pascal’s research helped me understand Schizophrenia at the pharmacological level.

After the poster viewing session, the Graduate Student Symposium presented talks on topics such as category based decision-making, the role of chemokines, and early chemical dysregulation in Alzheimer’s disease.

The conference ended with concurrent afternoon symposia after the coffee break. The two symposiums covered post-doctorate research on themes such as computational neuroscience and molecular advances in Alzheimer’s disease. The aim of systems and computational neuroscience research was to understand behavior in terms of the chemical and electrical activity of different components of the nervous system.

“It was an incredible experience. I never realized such advanced research was going on at an undergraduate level,” said Rida Khan ’14 from Lake Forest College. My peers and I were fascinated by how well the undergraduates, graduates, and post-doctorates from universities in the Chicago area were prepared for research in a range of themes in neuroscience. At the conference, the most demanding and challenging areas of neuroscience were highlighted, and this will definitely have a huge impact on the field of neuroscience. Jonathan Galanis of Bio130 at Lake Forest College said, “I was amazed by the number of undergraduate researchers and the quality of research by the students.” It was a great opportunity for undergraduate students who plan to choose research or medicine as their careers.