The Chance of a Lifetime: Lake Forest Students Come Face-to-Face with Neuroscience Icons

To the typical college student, waking up at 6:00AM during the summer is not an optimal situation. The typical Lake Forest College science student, however, would do nearly anything, including wake up at dawn and travel three hours, to personally meet three of the most world renowned scientists.

On May 19, 2011, a group of eager LFC students and professors made its way to the University of Wisconsin-Madison to attend the 4th Annual Oliver Smithies Symposium. Indeed, most prestigious conferences and symposia usually feature a well-known scientist, but the Oliver Smithies Symposium, amazingly, offered us Dr. Eric Kandel, Dr. Stanley Prusiner, and Dr. Susan Lindquist all under one roof.  As if we were not excited enough, special connections from Lake Forest College alumni Jessica Price ‘06 and Michael Zorniak ’07 enabled us to personally meet and chat with these scientists – a once in a lifetime opportunity.

The symposium is named after the 2007 Nobel laureate, Dr. Oliver Smithies, who is credited for the invention of gel electrophoresis and gene targeting, which are essential laboratory techniques in the scientific community.

Before Dr. Kandel, Prusiner, and Lindquist gave their talks to the symposium attendees, our Lake Forest posse split into two groups, each of which had the opportunity to speak or have lunch with Lindquist, Prusiner, or Smithies. To my particular delight (and extreme nervousness), I, along with roughly fifteen other students, first met with Dr. Susan Lindquist.  As a conglomerate of rising sophomores and seniors, knowledge of Lindquist’s work varied in different degrees —from what wikipedia.com offered to what one-semester long of studying and ultimately role-playing Lindquist offered.

Ask any biology or neuroscience major what the most difficult course is in the respective department, and he or she will, without hesitance, probably answer BIOL346:  Molecular Neuroscience. This upper-level class requires creating and teaching mini-lectures on various topics such as plasticity and learning/memory, mentoring the 100-level neuroscience students, and completing a neuroanatomy lab — just to name some highlights. The most intensive yet rewarding experience of Molecular Neuroscience is role-playing a famous neuroscientist at the end of the semester, in a workshop titled “Neurofrontiers,” after reading, studying, and integrating 30-50 primary articles written by that scientist.  Little did I know that I, as Susan Lindquist for the day, would be meeting the real Lindquist face-to-face merely 25 days later.

Although I spent most of my efforts masking my nervousness in front of Dr. Lindquist, I also managed to squeak out a few questions of my own that I had been dying to ask her. To my delight, I understood every word that came out of her mouth, a rare feat when listening to an expert in any field.  Meeting with this 2009 National Medal of Science winner solidified my feelings of accomplishment; somewhere inside of me, a light bulb came on that assured me all the grueling hard work I did (along with my fellow classmates)

Of course, one cannot write a review on the Oliver Smithies Symposium without mentioning the 1997 Nobel Prize winner/attendee, Dr. Stanley B. Prusiner. While I believe only a handful of LFC attendees could fully appreciate and understand the breadth of Lindquist’s research, many if not most of us knew about Prusiner.  Even the rising sophomores, who are required to read Deadly Feasts, which touches on Prusiner’s famous “prions”, were eager to ask him questions about his work.  Like Lindquist, Dr. Prusiner is also featured in Neurofrontiers, and three generations of LFC Prusiner role-players were present to meet and admire him.

After enlightening meetings with these scientists, we made our way to the main auditorium where the three would present their work to the public.  Dr. Eric Kandel, well-known for his work on learning and long-term memory storage, presented first. Not only was I surprised by his humorous presentation skills but also by my ability to understand most if not all of his talk, thanks to my research on Susan Lindquist’s work.  When Lindquist shared her and her colleagues’ findings next, I sat back, nodded at everything, and even correctly guessed which paper she would share in the next slide. I’m sure a few Lake Forest College students did the same during Prusiner’s talk.

Importantly, our Lake Forest group experienced something that may never occur again – three world-class scientists under the same roof and the opportunity to meet and speak with them. As a senior completing my last year as a neuroscience and biology major, this was a capstone occasion. To the sophomores and juniors, I hope this was an inspiring opportunity to further pursue and appreciate the field of neuroscience. 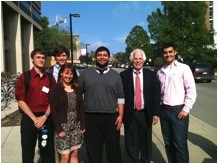