The first time he took the ACTs required by many colleges, Niam Abeysiriwardena scored a 28, which ranked him in the top 10% of high school seniors. He was 10 years old and simply offering proof that he was ready for high school.

Now the 17-year-old Northbrook resident, who graduated from Glenbrook South High School at age 13, is believed to be the youngest Lake Forest College graduate in the school’s 163-year history.

“It was a big deal for about two seconds,” Niam says of the age difference between him and his college peers. He arrived on campus at age 13 and quickly made friends and formed academic bonds.

“I made some good friends in college,” he says, adding that even though he lived at home he went to some college parties. “The major difference was a lot of them were drinking. I wasn’t.”

He had to complete his driver’s training class to graduate high school, but he still doesn’t have his license. In academia, however, his age is nothing more than a footnote on his list of achievements.

Niam, listed as first author, and classmate Sam Gascoigne had their paper, “Algal Bloom Expansion Increases Cyanotoxin Risk in Food,” published in the Yale Journal of Biology and Medicine.

Realizing the teen had interests beyond the scope of Lake Forest College, professors reached out to professor Mitra Hartmann at Northwestern University, where Niam began conducting biomedical engineering research. At 16, Niam received a prestigious Goldwater Scholarship and did research in the 2019 Parkinson’s Foundation-American Parkinson Disease Association Summer Student Fellowship Program. He received the Phi Beta Kappa key and other honors for his academic accomplishments, which he started compiling at an early age.

“One thing I’m not the youngest in is home, where I’m the oldest,” says Niam, who has a younger brother, Anish, 14, and an 11-year-old sister, Nishela. Their parents, Angela Anandappa and Nish Abeysiriwardena, are Sri Lankan immigrants who came to the United States to attend the University of Kentucky and have worked in the U.S. ever since. Niam’s dad has a doctoral degree in electrical engineering, and his mom has a doctoral degree and works as a food scientist. 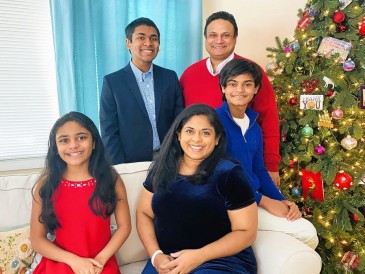 Born when his parents had jobs in San Luis Obispo, California, Niam started school after his family moved to Huntsville, Alabama. At 3, he drew the attention of his Montessori teachers. When he started kindergarten at a public magnet school, teachers had him take kindergarten and first grade at the same time.

“My dad has a spreadsheet to keep track of this,” Niam says.

Jobs moved the family to Lexington, Kentucky, where Niam became a top student at Rosa Parks Elementary School. When the family moved back to Huntsville, Niam took classes from an online high school until the 10-year-old became a standout student at New Century of Technology High School.

“It wasn’t really that tough,” Niam says of always being the new kid who was years younger than his classmates. “I kind of had it better than most kids in that situation. I don’t think I was ever made fun of.”

With his family now living in Northbrook, 12-year-old Niam started his senior year walking the halls at Glenbrook South High School, where he was on the math team. He did go to prom, but that was years later, when he went with his younger brother, who also graduated early and just finished his freshman year at Lake Forest College at age 14.

Grad school and a Ph.D. and maybe an M.D. are in the plans, “but it’s kind of hard to get into a program at such a young age,” Niam says. For now, he is working remotely doing research for Northwestern.

“I appreciate what research can do, but I also want to apply it,” Niam says. “I also like making mathematical models, especially ones that help humans live better lives.”

The way he looks at it, by graduating college at 17 instead of 22, he’s already invented a time machine of sorts. “The thing I appreciate the most,” Niam says, “is that I have five more years that I’ve earned back.”