Nicotine is known to be one of the most addictive substances in humans (Addition Center 2019). Traditionally, nicotine enters the body via tobacco. But, in a more modern era, the ease to abuse nicotine has become easier, with e-cigarettes being implemented into youth culture. Between the years of 2016-2017, Juul Labs, a popular e-cigarette company, increased its sales from 2.2 million devices sold in 2016, to 16.2 million devices sold in 2017—a 641 percent increase (CDC 2018). With an ever-prevalent necessity to understand nicotine addiction, much research has gone into how nicotine affects the brain.

Nicotine is known to be an agonist to specific acetylcholine receptors in the brain; it binds directly to the receptor (Benowitz 2010). This allows calcium-gated channels to open, causing the release of different neurotransmitters. Particularly, nicotinic receptors act on the dopaminergic system, which creates a pleasurable occasion in the brain (Benowitz 2010). With prolonged use of nicotine, an individual may become dependent on nicotine, due to neuroadaptation (Benowitz 2010). This causes the number of binding sites on the nicotinic cholinergic receptors in the brain to increase, which leads to tolerance and dependency. Like nicotine, many drugs of abuse are also characterized by an increase in dopamine in the nucleus accumbens - one of the “reward structures” in the brain (Di Chiara et al. 2004; Koob 2000; Salamone and Correa 2002; Wise and Rompre 1989). While which neuron pathways are acted upon varies with individual drugs, many often induce dopamine to be released, causing feelings of pleasure and euphoria.

Both nicotine and cocaine have been used as stimulants to study addiction in rat models, as both act in some form on the dopaminergic system. While cocaine acts directly on the dopaminergic pathways and nicotine acts on the cholinergic pathway, a growing body of research has indicated that both drugs may interact on a cellular and systematic level to modulate the reward pathway (Hansen et al. 2007). One study showed that nicotine can fully substitute for cocaine in discriminative tasks in mice (Desai and Terry 2003), while another study has shown rats repeatedly treated with nicotine increase cocaine-seeking behavior (Bechtholt and Mark 2002). In human addicts, doses of nicotine have been reported to increase cravings for cocaine (Reid et al. 1998). Collectively, this suggests that there the activation of nicotinic receptors may play a part in seeking-behavior in cocaine (Hansen et al. 2007).

In the current study (Hansen et al. 2007), the effects of mecamylamine (MEC), a specific nicotinic antagonist, on cocaine seeking-behavior was examined in a rat model. To do this, male Sprague-Dawley rats were first trained in operant conditioning chambers to press a lever with a food reward. After this behavior was learned, rats were asked to do the same task, but to do it instead with a 4-s infusion of cocaine solution (0.75 mg/kg per 120 μl infusion) via IV for one hour. Once this acquisition phase and a preference for cocaine was made, MEC was added to the cocaine solution. To evaluate the effect of dosage of MEC on cocaine seeking behavior, rats were either given cocaine solution with 0 μg MEC per infusion, 7 μg MEC per infusion, or 70 μg MEC per infusion. Rat testing sessions with cocaine-MEC infusions lasted for 6 hrs, to give time to see the affects of the MEC fully. Rats then continued this task with the cocaine-MEC solution infusions for five days. On the sixth day, rats were given just cocaine solution, containing no MEC, for 6 hrs. Rats were then tested for an additional 3 days. After data collection, one-way ANOVAs were run to find differences in cocaine acquisition over the testing period. 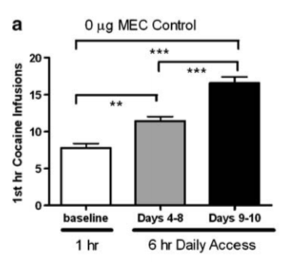 This study found animals significantly escalated their total intake of cocaine by the eighth day of 6 hr access, and the majority of 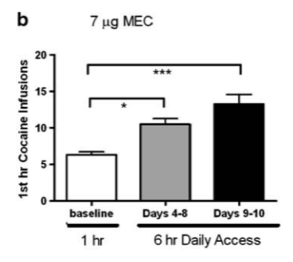 the escalation was seen in the first hour of the 6 hr sessions. Regarding the effect of MEC, when 70 μg MEC per infusion was added to the cocaine solution, the rats did not show an escalation of cocaine intake during this phase, suggesting this dosage of MEC can inhibit an increase in cocaine-seeking behavior during administration. It is important to note that  MEC treatment did not stop cocaine-seeking behavior all together, but it did stop the increase of this behavior from occurring, unlike  other treatments. It was also found that for cocaine intake  in the first hour of the post-MEC sessions, rats that previously received the 70 μg dose of MEC demonstrated a strong increase in cocaine intake immediately after MEC was removed. This suggests that MEC 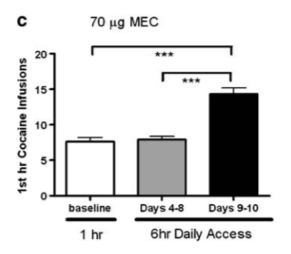 only has affects during administration but will not prevent relapsing from occurring.

This study provides evidence for an important role of nicotinic acetylcholine receptors in regulating the level of cocaine self-administration in rats. Cholinergic systems are integral components of the brain circuits that play a part in neuroadaptation to repeated drug exposure, so the possibility that MEC prevented an increase in cocaine self-administration is worth noting (Hansen et al. 2007). In addition to nicotinic acetylcholine receptors, the n-methyl-D-aspartate (NMDA) subtype of glutamate receptors plays an important role in the behavioral actions of psychostimulants. Sensitization of locomotor activity, which causes an escalation in drug use, is brought on by repeated treatment with stimulants and is  sensitive to blockade by antagonists of the NMDA receptor (Carlezon and Nestler 2002; Karler et al. 1994; Schenk et al. 1993). This is also the case with sensitization induced by repeated stimulation of nAChRs with nicotine (Shoaib and Stolerman 1992).  A related experiment, where rats are given NMDA instead of MEC, may reveal more insight into the pathways involved with addiction and addictive behaviors. With more insight as to how addiction occurs in the brain, treatment and prevention for drug addicts may become more effective for the future.

Carlezon WA Jr, Nestler EJ (2002) Elevated levels of GluR1 in the midbrain: a trigger for sensitization to drugs of abuse? Trends Neurosci 25:610–615

Desai RI, Terry P (2003) Evidence of cross-tolerance between behavioural effects of nicotine and cocaine in mice. 166:111–119