The Empathetic Neurological Footprint of Racism

The long-term effects of racism may seem unidentifiable. But appropriate imaging reveals that individuals who have had traumatic experiences of discrimination develop cognitive empathetic mechanism that allow them to readily detect negative social cues.

When someone steps in mud, that impact reshapes the surface of the mud and creates a footprint. Identifying what changes these impacts make when they mold the surface help us understand the development of new structures and how these structures alter the capabilities and properties of the surface. In an article published by the journal Scientific Reports, Melike M. Fourie et al.1 used a similar approach to unravel the development of neurological changes in black individuals who have had early experiences of social adversity; they found that everyday discrimination assimilated the activation of cognitive empathetic mechanisms in the brain.

It is known that early social experiences influence neuroplasticity and evidently shape neural circuits of socioemotional behavior throughout life 2. This suggests that it is possible that early adversity, like physical and emotional abuse, may also change and mold the structure and circuits of the brain responsible for stress responses, such as the amygdala. These modifications ultimately affect emotional processing and control 3. However, although researchers  understand the effects of socioemotional abuse on neural circuits of the brain, there is still a limited understanding of the effects of psychological and chronic stress on neural circuits.

Discrimination is recognized as a continuous form of psychological stress that can affect someone’s health 4. But only now has it become possible to determine the long-lasting effects of cumulative discrimination on neural mechanisms 5. These effects can be closely studied in South Africa because of its historical division between White Europeans and Black Non-Europeans known as apartheid. In comparison to past research of intergroup responding in many post-conflict countries, here researchers can investigate how social adversity impacts neural circuits responsible for the ability to empathize with others.

This is an important topic to come to understand because empathy is a critical human sensitivity. Firstly, empathy can assist in psychological repair when individuals observe trauma testimonies demonstrating expressions of forgiveness and remorse 7. Secondly, previous research suggests that psychological stress impairs the ability to empathize 6; ultimately, if empathetic mechanisms are interrupted it not only could be harmful to society and cause a decrease in the ability of individuals to relate and care for others, but it could decrease the ability of individuals to regulate their personal distress as well. 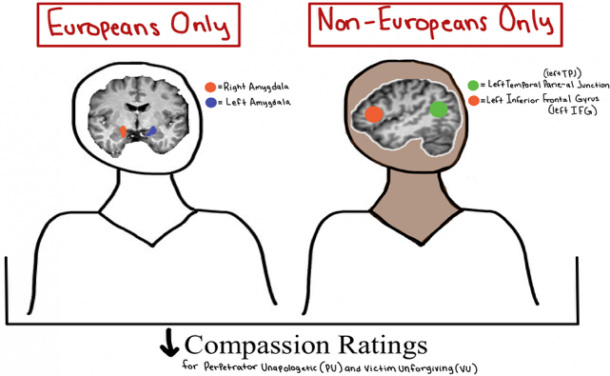 The effects of chronic social adversity on neural pathways of empathy. Melike M. Fourie et al.1 describe the effects of social adversity or lack thereof on neural circuits of empathy. They found that overall, in response to all four conditions, victims unforgiving (VU) and perpetrator unapologetic (PU) conditions had a significantly lower rating for compassion (p = 0.001). Higher activations in the right amygdala were associated with reduced compassion ratings for both participants (p = 0.01). Only Black participants demonstrated significantly higher activations of the left temporal parietal junction (Left TPJ) and left inferior frontal gyrus (Left IFG) when compassion ratings decreased (p = 0.05) and emotional abuse increased (p = 0.01). In red lettering an example of segregated signs seen in South Africa during apartheid is depicted to signify everyday discrimination faced by black participants. This depicts the development of individual empathetic pathways for those who have faced early adversity and psychological stressors.

The authors used fMRI imaging to directly measure the effects of ecological stimuli on brain activations. They displayed four varied stimuli, forgiving/unforgiving victims and apologetic/unapologetic perpetrators. In order to ensure that the black participants varied distinctly from white participants, they selected individuals who experienced apartheid in South Africa during the 1940s to 1990s. Additionally, these stimuli used were created to replicate  real life situations the black individuals encountered previously in South Africa during apartheid.

It is important to note that there are two known pathways that help conceptualize empathy, a mentalizing and cognitive mechanism and an affective empathy mechanism 8; and more importantly that observing others in physical pain activates the affective empathy pathways 9, and observing others in emotional distress activates areas associated with more mentalizing and cognitive pathways of empathy. Therefore, the authors hypothesized that the ecological stimuli would activate more effortful cognitive mechanisms than affective sharing mechanisms in participants with experiences of early adversity.

In order to measure empathy, the authors used compassion ratings to verify the amount of empathy felt by both participants for each ecological stimulus presented. Perpetrator unapologetic (PU) and victims unforgiving (VU) were rated significantly lower for compassion in both participants (Fig. 1). They also saw that higher activations in the right amygdala were tied to lower compassion ratings across both participants during PU and VU conditions. These activations of the right amygdala are associated with affective empathy pathways. Additionally, higher activations of the left temporal parietal junction (left TPJ) and left inferior frontal gyrus (left IFG) also showed a significant decrease of compassion, but only for socially discriminated Black participants. These activations are associated with more cognitive, mentalizing empathy pathways.

Ultimately the authors’ findings suggest that areas involved with stress-related pathways and socioemotional information processing are both activated more in individuals who have experienced cumulative and chronic social adversity. Because the left TPJ and the left IFG are responsible for information processing, they allow individuals to assess and detect negative social cues. And while affective and cognitive processes vary based on the empathetic-evoking situation presented, cognitive mechanisms are also associated with areas responsible for memory consolidation and self-reflective mechanisms 10. Thus, past experiences play a critical role in shaping the empathetic pathways our brains decide to use.