Human social groups are much larger than other primates’ who rely on social touching or grooming to form social bonds12. Knowing this, it has been concluded that humans must have a social bond forming mechanism which differs from social touching or grooming that can be identified to explain their ability to form larger social groups3. Though social laughter is not completely understood, researchers have proposed that it may play a role in opioid release and be the mechanism which enables humans to form greater social bonds1. Sandra Manninen et al. conducted experiments and shared results which track social laughter and its relation to endogenous opioid release in Social Laughter Triggers Endogenous Opioid Release in Humans4.

Laughter is universally known as a positive social emotion5 and people who have a similar sense of humor are more likely to affiliate with each other6. Laughter’s contagious nature7 makes µ-opioid-receptor (MOR) (which receive endogenous and exogenous opioids) responses propagate through a group1. In order to understand the mechanism which allows humans to build larger social group sizes than other primates, Manninen et al. conducted a study examining if social laughter did indeed trigger endogenous opioid release.

Manninen and her team hypothesized that social laughter would trigger endogenous opioid release in the brain. The researchers gathered twelve participants for their study. They divided the participants into two groups. One group sat in a room with their best friend and watched comedy clips on YouTube for half an hour, which is a procedure that has been used before in previous studies as a method of triggering social laughter1. This group experienced the social laughter experimental condition. The other group sat in a room alone for half an hour. This group experienced the baseline experimental condition. Immediately after completing their respective 30-minute task, both groups took a positron emission tomography (PET) scan. A PET scan is a type of screening test in which participants are injected with a radioactive substance which shows areas of the brain that have high activation levels and low activation levels. After their initial PET scan, participants took a two-hour break before switching group conditions. The break allowed time for decay of the radioactive injection. Following the break, the group that had been sitting with their best friend watching YouTube comedy clips was now sitting alone and vice versa. Then, after experiencing the second experimental condition for half an hour, all participants immediately took a second PET scan. Having the groups participate in both experimental conditions allowed the study to be counterbalanced.

Immediately prior to taking (0 minutes), during (27 minutes), and after (51 minutes) both PET scans, the researchers asked the participants to give self-reported data on their level of amusement and calmness. They did so by asking participants to rate how amused and calm they felt on a scale of 1-100 at the respective times throughout the experiment. Manninen et al. found that participants reported feeling significantly more amused and calm right after experiencing the social laughter condition than the baseline condition. During and after the PET scan, there was no statistically significant difference between the social laughter and baseline condition groups. From this data, researchers gathered that social laughter was indeed the mechanism triggering the feeling of amusement and calmness.

Finally, Manninen and her team of researchers looked at the association between MOR availability and the frequency of laughter participants had experienced while watching comedy clips with their best friends. They found that there was a strong, positive correlation between the two. Individuals with more MORs had higher social laughter frequency. They saw this effect most strongly in the anterior cingulate cortex, middle cingulate cortex, orbitofrontal cortex, and ventral striatum. The ventral striatum and amygdala are highly involved in the reward circuit, which supports the researchers’ hypothesis that MOR availability is reward-sensitive11.

As the data seemed to support their hypothesis, Manninen and her team concluded that social laughter triggers endogenous opioid release in the brain, which ultimately allows humans to form larger social networks than primates who rely on grooming-based social bonding to form their social groups (Figure 1). They also concluded that individuals who have more MOR available for endogenous opioid binding are more likely to laugh more frequently in social laughter situations (Figure 1). 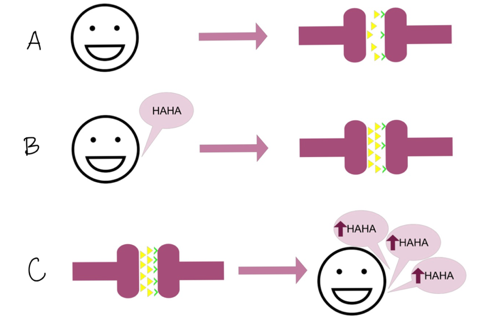 The strengths of this study are the thoroughness and consistency of results, as well as the fact that the researchers addressed that it should be replicated to accept the results since this is a preliminary finding. The data is convincing, but the researchers make sure to point out that these results are not certain. The major pitfall of this study is that all participants in the same taken (only 12) were men, which makes it challenging to generalize the study’s findings to the general public as it is not representative of the population.

This study has many implications for human social group forming. With the information gained in this study, researchers could look further into the constraints on social group size in humans based on social laughter. For instance, they could research if there is a maximum number of people that humans can bond with while laughing socially.