ALS is an incurable, fatal disease which affects approximately 20,000 people in America today (1). Mutant TDP-43, otherwise known as TDP-43 proteinopathies (2), is known to be one of the defining pathological hallmark proteins for ALS, FTD and many other neurological diseases (3). The pathology behind many of these neurological diseases involves the mislocalization of TDP-43 from the nucleus to the cytoplasm in both neurons and glial cells.

Oligodendrocytes’ main function is to produce myelin (4). Myelin allows for effective impulse propagation across the axon, which is essential for nervous system functioning. Damage to oligodendrocytes will decrease myelination and will negatively impact the velocity of nerve conduction (5). The question is: what relationship do oligodendrocytes and TDP-43 have, and are oligodendrocytes important to ALS?

The main study hypothesized that oligodendrocytes depend on TDP-43 for myelination and survival, demonstrating that oligodendrocytes are important to ALS (6). To test this, researchers bred TDP-43 mice with Cnp-Cre mice (7), only active in glial cells, and researchers knocked out TDP-43 from the offspring (8). They performed grip strength and balance beam tests on the mice in which the knockout (KO) groups’ performance decreased significantly during a 60-day period. They additionally observed the survival rates of the mice and noticed that the KO mice developed seizures and died significantly faster than the control groups. They then took light and electron microscopy images of the white matter in the spinal cords of the mice and observed that the myelin had thinned. Additionally, the oligodendrocytes lost their shape, displaying evidence of degradation.

In order to determine if the loss of TDP-43 in the oligodendrocytes would lead to defects in myelination capacity, researchers identified genes involved in myelination. Using cross-linked immunoprecipitation (CLIP) sequencing dataset, TDP-43 was bound with major protein components in the myelin such as Plp1, Mbp, Mog, and Mag. They used qRT-PCR to downregulate the mRNA expression for the key myelin genes in the spinal cords of CNP. They noticed that the mRNA expression for these genes decreased after 21 days and more significantly after 60 days. OPCs were then isolated from CNP, differentiated into oligodendrocytes, and immunostained from TDP-43 and Mbp. They observed a loss of TDP-43, which correlates with a deduction of Mbp protein. This confirmed that reduction of these key myelin genes is partly due to the loss of TDP-43.

The researchers were curious as to how TDP-43 KO would affect the spinal cord’s motor neurons. They used choline acetyltransferase (ChAT) as a spinal cord motor neuron and observed the number of motor neurons. They found that a small number, less than 10% of ChAT-positive motor neurons, had a decreased amount of TDP-43 expression after both 21 and 60 days in the CNP. This indicated that loss of TDP-43 in oligodendrocytes and motor neurons does not lead to rapid death of motor neurons. Researchers then observed an early event of ALS pathogenesis, specifically the denervation of the neuromuscular junctions (NMJs). They co-stained NMJs of the gastrocnemius muscle with synaptophysin (a presynaptic neuronal marker) and fluorescence-tagged α-bungarotoxin (a postsynaptic acetylcholine receptor labelor). NMJs were found to be fully intact and innervated in CNP. Therefore, TDP-43 KO in oligodendrocytes does not lead to motor neuron death and NMJ denervation.

Two therapeutic targets were acknowledged in the article for ALS and other neurodegenerative diseases. ALS, Alzheimer’s (AD), Parkinson’s (PD), and multiple sclerosis (MS) all have evidence that necroptosis (12) is involved in their pathology. Pharmacological and genetic inhibition of necroptosis is shown to have benefits for cellular and mouse models of ALS, AD, PD, and MS. Researchers have been focusing on finding ways to effectively target neuroinflammation. Anti-inflammatory compounds have been found to increase motor neuron survival in transgenic mice. Mastinib, a tyrosine-kinase inhibitor, was observed to decrease abnormal glial cells, microgliosis and motor neuron degeneration in the spinal cord of mSOD1 mice. These mice were found to have prolonged survival. Phase II and III clinical trials were recently completed to test the efficacy and safety of Masitinib in combination with Riluzole (13), a drug that delays the onset of ALS symptoms for up to 2-3 months, in the treatment of ALS patients. Final results are expected to be announced soon. 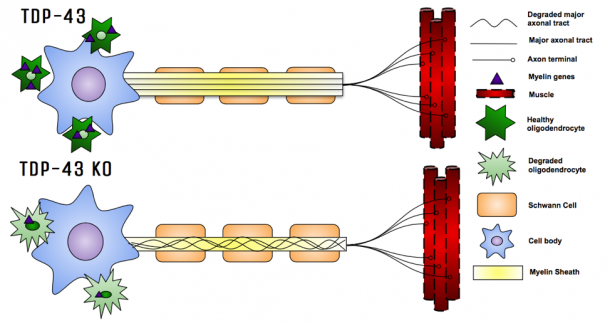 This figure displays the difference in oligodendrocytes and the connecting neuron between a neuron that has TDP-43 knocked out and TDP-43 present. In the TDP-43 KO neuron, the three major axonal tracts degrade, the axon thins and degrades, there are less oligodendrocytes expressed in both gray and white matter, and the key myelin genes are less expressed in the oligodendrocyte. However, the muscle neuron shows little to no loss.