Forming the Functions: Neurogenesis of nerve cells in cancerous tumors

Based on: Progenitors from the central nervous system drive neurogenesis in cancer

To ensure that homeostasis is maintained as embryos develop, the nervous system grows mostly in tandem with blood cells and the vascular system. The initiation and metastasis of cancerous tumors tends to follow a similar pattern of growth. The creation of these systems is dependent on the existence of intermediate stems cells, called neural precursors, which are found within regions of the central nervous system. In tumors specifically, the growth of axons is propagated from pre-existing nerves by neural precursors. This process is promoted by small peptides called neurotrophic factors that are expressed within the tumor microenvironment and which lead to the build up of the nerve network associated with the tumor(s), increasing the ability of the tumor cells to conduct neural signalling; consequently, this can support the development, progression, and metastasis of the tumor(s). It is currently known that nerve fibers, such as microtubules, in cancerous tumor microenvironments can regulate the initial metastasis and spread of cancerous cells. However, it is not known how the process of neurogenesis is conducted in tumors. The study that will be discussed in this paper focused on the effect of the microtubule-associated protein doublecortin (DCX+) on neural progenitors and, consequentially, the initiation of neurogenesis in prostate tumors. Neural progenitors are defined as cells that can divide a limited number of times and have the capacity to differentiate into certain neuronal and glial cell types.

Doublecortin (DCX+) is a neuronal migration protein in humans encoded by the DCX gene and is a classic marker of neural progenitors in the central nervous system. In the study conducted, DCX+ cells were quantified in tissue samples of benign prostate enlargements of 15 no-risk patients, as well as in cancerous prostate enlargements of 17 low risk, and 20 high risk participants.

The results that were collected support that the density of DCX+ cells in a tumor was significantly associated with the tumor’s aggressiveness (Spearman’s correlation = 0.7797, p= <0.05). This finding suggests that DCX+ cells may play an important role in the development and progression of prostate tumors.

Looking further into this finding, the researchers investigated the role of MYC in cancerous cells. MYC is a family of proto-oncogenes and regulator genes that code for transcription factors, primarily functioning to stimulate cell proliferation and regulate apoptosis. MYC is found in small amounts in normal cells as it is essential for cell growth control; however, in cancerous cells, MYC is present in high levels. A Hi-MYC mouse model expressing a human MYC gene was used to test for the presence of DCX+ cells in the stroma of prostate cancer tissues. Human DCX was tagged with enhanced yellow fluorescent protein (eYFP), and the tumor cells in the stromal compartment were characterized as lineage negative, creating Lin-eYFP+. These Lin-eYFP+ cells were found in prostate tumors in the mouse models but were not identified in healthy prostate tissues from mice in the same litter that did not share the MYC transgene. 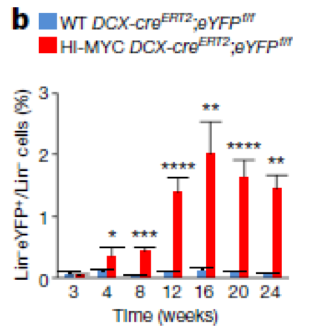 Figure 2. The frequency of Lin-eYFP+ cells present in collected prostate tumor tissue samples during cancer development. The amount of Lin-eYFP+ cells that were found in the Hi-MYC vs the wild type was significant at all weeks measured after 4. This indicates that the Hi-MYC cancer model expressed significantly higher levels of MYC than the non-cancerous mice.

Another experiment was then conducted within the study to look at the neurogenic capabilities of the previously identified Lin-eYFP+ cells in vivo. Three weeks after the birth of the cancerous mouse models, the researchers activated genetic recombination in the mice to see how neurogenesis processes would be affected. Activation of genetic recombination resulted in Lin-eYFP+ cells being found in the prostate tumors but not in the healthy tissues that surrounded the prostate. This suggests that the Lin-eYFP+ was essential for neurogenesis in the cancerous models.

The subventricular zone (SVZ) is a major area that forms the lining of the lateral ventricles and part of the dentate gyrus in the hippocampal area – an area that is important for neurogenesis. During the development of prostate cancer in Hi-MYC mice, the number of Lin-eYFP+ neural progenitors was monitored in the SVZ and the olfactory bulb to see if the progenitors associated with cancer would be found in these regions. Experiments were performed on mice beginning 6 weeks after birth, and three subpopulations of Lin-eYFP+ neural progenitors were used. Significant oscillations were found over time during the development of cancer in one of the subpopulations; Lin-eYFP+ cells were found in the blood of these Hi-MYC model mice at 6, 12 and 16 weeks old. This finding supports the idea that the blood-brain barrier was breeched in Hi-MYC mouse models, but not in other unaffected mice of the same litter. Therefore, it can be concluded that neural progenitors may penetrate the blood brain barrier and migrate away from the SVZ, leading to neurogenesis in various forms of cancer.

To look further at the migration of cancer-causing properties, a range of metastatic tissues (colon, lung, liver and lymph nodes) xenografted with human cancer cells were studied in nude mice. Cancerous cells were found only in the cancerous tissues and not in healthy tissue, suggesting that neural progenitors are selectively attracted more to areas that contain cancer cells. This finding also supports the idea that DCX+ cells likely play a critical role in the early stages of tumor development. Select progenitor cells in the SVZ were depleted, inhibiting tumor development and leading to the conclusion that neural progenitors play a major role in the initial stages of development for both metastases and primary tumors.

The overall conclusion of this study is that tumor-related neurogenesis is likely supplied by DCX+ neural progenitors derived from the SVZ. Results from this study strongly support the hypothesis that the SVZ is taken over during the development of cancer and growth pathways are redirected through the blood-brain barrier. This conclusion makes sense as the crossing of the blood brain barrier provides developing tumors with the neural progenitors necessary to initiate neurogenesis and increase metastasis. Further studies are needed to investigate the characteristics of the cellular and molecular events that control the movement of neural progenitor cells from their natural locations. Finally, the results collected from this study also suggest that the central nervous system may be responsible for regulating the development and progression of cancer. Under stressful conditions, such as cancer, the central nervous system can activate the autonomic nervous system to secrete mediator chemicals that favour the initiation and progress of tumors. 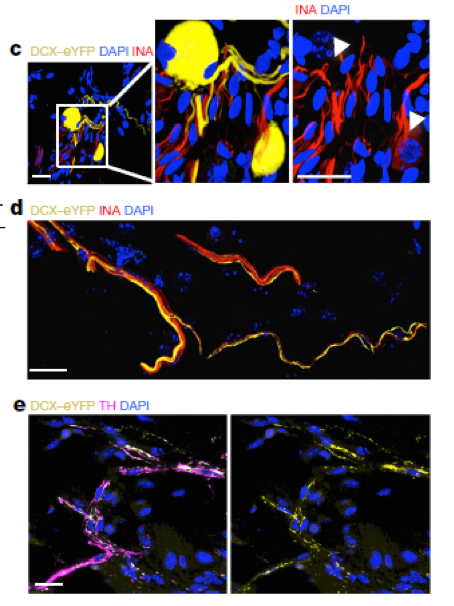 Figure 3. DCX-eYFP+ neural progenitors and nerve fibers at five and eight months respectively. The yellow color seen in all three images indicates the presence of DCX-eYFP+ in cancerous nerve fibers, indicating a role in cancerous growth.

Mandal, A. (2019, February 27). What is Neurogenesis? Retrieved from https://www.news-medical.net/health/What-is-Neurogenesis.aspx.

Uribesalgo, I. (2012). From oncogene to tumor suppressor The dual role of Myc in … Retrieved from https://www.researchgate.net/publication/224283914_From_oncogene_to_tumor_suppressor_The_dual_role_of_Myc_in_leukemia.