Out of the bag: Balance mechanisms during locomotion in cats

Domestic cats are quadrupeds with appendages designed for aiding in how they move. Voluntary control of their tail can contribute to the way they maintain balance. But how exactly do they do it? The role of a cat’s tail, and other mechanisms for posture, in balance are explained. Vestibular loss leads to opposite automatic postural response on rotating platforms compared to control trials. Furthermore, stimulation of the locomotor region causes pathways to forward locomotion. A cat’s way of responding to spinal cord injury and maintaining its posture may be applicable to humans as well.

Maintaining balance and posture is important in animal locomotion. Mobility allows for an organism to know its surroundings. For an animal to move, an equilibrium in its locomotion system must be maintained (Karayannidou et al. 2009). Cats have many methods for maintaining balance while moving, including the tail, the vestibule, and their motor cortex. The spinal cord is essential in a vertebrate’s ability to remain upright, and the vestibule aids in equilibrioception. The motor cortex provides the pathways for locomotion to occur. The purpose of this review was to identify the mechanisms through which cats maintain balance.

Figure 1: Stills taken from a video of a cat traversing across a moving plank. As shown, the tail is moving to the right as the beam moves to the left. A shift in cat's hip position indicates a shift in its center of gravity (Walker et al. 1998).Cats can be observed moving their tails as they walk and jump. A domestic cat’s tail has vertebrae that are covered in six muscles and can move independently in response to stimuli such as temperature or touch (Walker, et al. 1998). Quantitative evidence of this behavior was found.

Four cats were trained to move across a narrow beam that was 5.1 cm wide and 3.7 m long. They were then observed through videotaping. The beam was moved in random trials so the cat could not predict the movement (Fig. 1). The role the tail played in balance was observed before and after each cat underwent surgery where a transection in the vertebrae in the tail was made. Performance of the tail when the beam was stationary versus when it was moved laterally was compared pre- and post-surgery. The number of times the cat fell or jumped off the plank was also counted before and after the spinal cord was cut.

Before the surgery, the cats held their tails up while moving across the stationary beam. 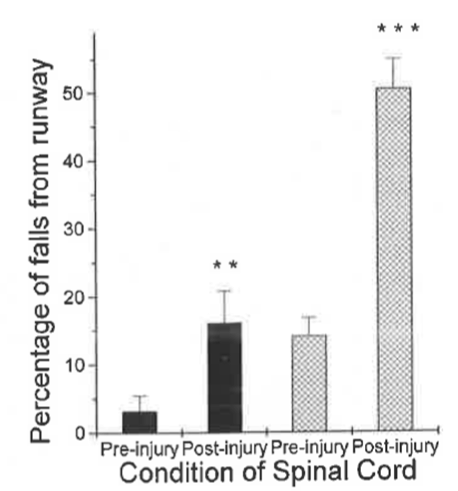 After the spinal cord was cut in the tail, their performance walking on the planks were observed. The base of the tail remained upright, while the rest of the tail was limp. A significant increase in falling was found in cats post-spinal cord lesion (16.1% of the trials, n=62) when the plank was moved 2.5 cm (Fig. 2). When the plank was moved 5 cm, an even larger percentage of falling was observed. The cats could not properly move their tails to counteract the movement of the plank. This shows the cats’ reliance on their tails for balance when traversing across an elevated surface.

The vestibule is the inner section of the ear that provides detection of gravity and equilibrioception, or an animal’s sense of balance. Cats and humans alike face the challenge of detecting gravity when stationary. Cats lacking in vestibular tissue were experimentally found to have difficulty staying upright when the support surface rotates (Macpherson, et al. 2007). Without a functioning vestibule, the cats’ way of maintaining its posture was compromised. The main reason why this occurred involves the automatic postural response (APR), where the forward tilt of the body is adjusted. Vestibular loss will cause the cat to show an APR in the direction opposite to the APR before the loss. The cat incorrectly estimates its center of mass (CoM) motion because it cannot detect it.

An APR is a series of muscle contractions that follow a change in the platform an animal is standing on. Once the platform moves or rotates, specific muscles are activated or inhibited by the nervous system. The result is the legs putting on a different force in order to adjust the body’s posture in response to the platform change (Macpherson, et al. 2007).

Three female cats were trained to stand on four plates on a rotating platform. Electrodes for detecting electromyographic (EMG) activity were placed on the limbs, neck, and trunk of the cats after going under anesthesia. Activity in the proximal and distal extensors of the limbs were recorded in the experiment, as they are involved in the APR (Macpherson, et al. 2007). The cats’ APRs were observed before and after the loss of its vestibule.

In the control group, each cat stood on the plates with its weight evenly distributed. The platform was rotated, and APR was measured by head position and angle, and the position of the forelimbs and hindlimbs. The cats were observed to change their posture in accordance with the 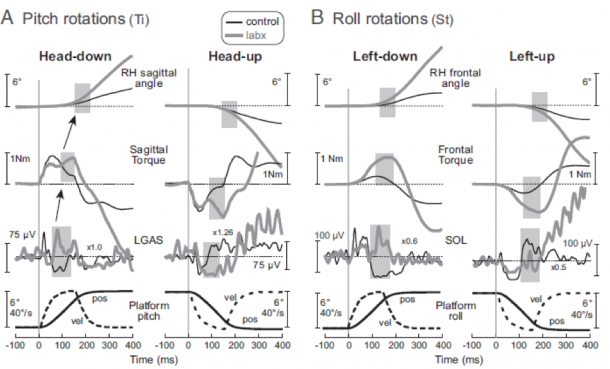 tilt of rotation. The cats were then put under anesthesia again for their vestibular tissue to be destroyed in a labyrinthectomy. When standing on the platform post-surgery, each cat could not fix its posture after the platform rotated.

Figure 3 demonstrates the characteristics following the APR of the cat (as shown by the gray rectangle) before and after vestibular loss. A stark difference in the EMGs after the APR is shown by the diverging lines. Where the EMG would go in one direction in the control trials, the EMG went in a completely different direction after the labyrinthectomy (divergence in the lines after gray rectangle, Fig. 3). The cat’s body moved downward, as if the platform was moving downhill and not rotating.

Without function of the vestibule, an APR opposite that of the control response was found. The nervous system of the cat must estimate the direction where the center of motion will move (Macpherson, et al. 2007). Having no vestibular sensing will affect how the postural response occurs. This explains why difficulty in balance and staying upright occurs after vestibular loss.

Locomotion stems from the ability to control balance and posture. The motor cortex is the area of the brain that controls voluntary movement. Disrupting the pathway through which muscles are stimulated will affect locomotion. The extent to which locomotion is affected was tested on decerebrated cats. 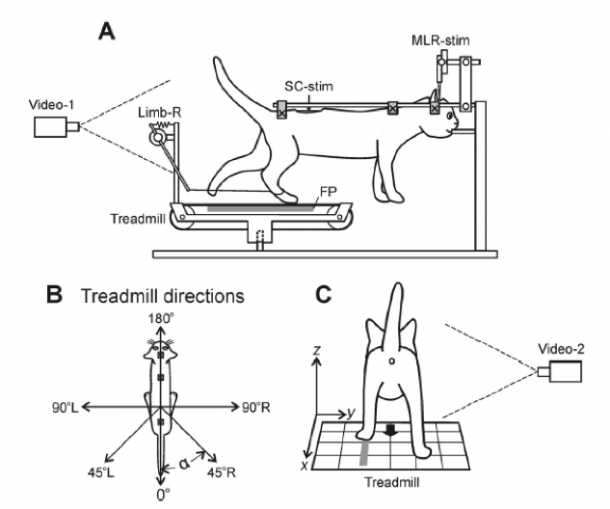 Figure 4: Setup of experiment with cat. A: The cat's head, trunk, and pelvis remained stationary in a rigid frame as the cat walked. Forelimbs remained stationary while the hindlimbs moved on the treadmill. A force plate (FP) measured the contact force under each limb. Movement of the limbs was caused by MLR (MLR-stim) or SC stimulation (SC-stim). Limb-R was the sensor that recorded movement of each limb. A rear view of the entire process was recorded by Video-1. B: The treadmill went in different directions. Muscle activity was recorded when the treadmill was oriented at 0˚, 45˚, and 90˚. C: A rear view of the setup. The axes X, Y, Z were used to analyze movement and determine position of foot. Video-2 recorded a side view (Musienko, et al. 2012b).

A precollicular-postmammillary decerebration involves the removal of cerebral tissue while the subject is under anesthesia. As a result, the subject is unable to move voluntarily (Musienko, et al. 2012a). By removing the cat’s sentience, the researchers were able to measure characteristics of walking, such as posture and balance.

Musienko, et al. investigated the locomotion of decerebrated cats with the addition of stimulation to the spinal cord (SC) and mesencephalic locomotor region (MLR) in the brain (2012b). Nine adult cats were decerebrated and underwent a laminectomy, where vertebral bone is removed, in the lumbar region of the spine. Electrodes were placed in the gastrocnemius lateralis, the ankle extensor; tibialis, the ankle flexor; adductor femoris, the hip extensor and adductor; and gluteus medius, the hip extensor and abductor. These muscles were recorded because of their involvement in the longitudinal and lateral parts of stepping. 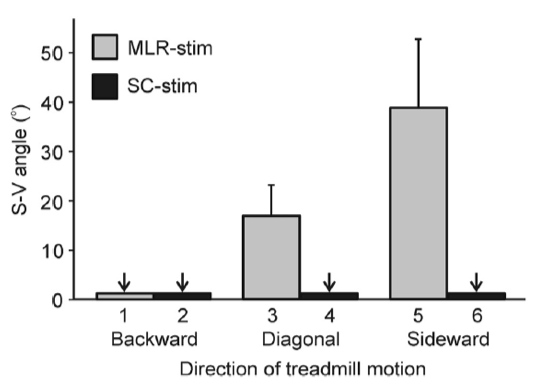 Figure 5: Mean (plus or minus SD) of S-V angle for the treadmill moving at 0 degrees (backward), 45 degrees (diagonal), and 90 degrees (sideward). Bars with an arrow indicate the angle being close to zero. MLR-stim: gray bar; SC-stim: black bar (Musieko, et al. 2012b).

The cat’s head, trunk, and pelvis were stationary as either the MLR or the SC were electronically stimulated. Fig. 4 shows the experimental setup, where the decerebrated cat was placed on a treadmill with two belts for the left and right limbs to move on. A bipolar electrode was placed into the brainstem to stimulate the MLR (MLR-stim, Fig. 4A). The SC was stimulated with a ball electrode in the dura matter of the spinal cord (SC-stim, Fig. 4A). The researchers measured muscle activity with the treadmill positioned at three angles: 0˚, 45˚, and 90˚.

The S-V, or the angle between the stance of the foot and velocity vector, was measured to determine any deviation from the direction of the treadmill (Musieko, et al. 2012b). The higher the angle, the larger displacement of the foot when stepping. What the researchers found was a significant difference in the S-V angle with MLR stimulation when the treadmill was at a diagonal (45˚) and going sideward (90˚) as shown in Figure 5. Because the S-V was larger when the locomotor region was stimulated, that means the cat could not fully adapt to the differing treadmill directions.

In conclusion, there are many mechanisms for a cat to maintain balance and posture. Without the function of the spinal cord, especially in its tail, a cat cannot balance well enough on elevated surfaces. When walking on a beam with a sacrocaudal transection, cats were found to be more likely to fall (Walker, et al. 1998). In addition to their tail, cats depend on vestibular function to accurately step and regain original posture. Cats with no vestibule were found to respond to platform rotations in the direction opposite to control trials (Macpherson, et al. 2007). The vestibule is necessary for gathering environmental information for the cat or any other organism to change its posture and adjust its balance on the surface. When the spinal cord was stimulated in decerebrated cats, the trajectory of its stepping aligned with the treadmill it walked on (Musienko, et al. 2012b). The locomotor region of the brainstem facilitates forward walking.

Three mechanisms of cat balance were identified in this review. Cats were experimentally found to depend on the vestibule, the tail and spinal cord, and the motor cortex for locomotion. However, what is not fully understood is the specific pathway in the motor cortex that triggers a cat’s ability to change posture and balance. These findings also can be applied to recovery from spinal cord injury in humans (van Hedel & Dietz 2010). Research on quadrupedal balance is also necessary in the use of four-legged robots. These robots are used to further quantify the purpose and uses of tails in quadrupeds (Heim 2016). With this knowledge, advances can be made in both the understanding of the use of tails in land animals and in the understanding of locomotion in humans.

I would like to thank Dr. Barbosa and the Biology Department of Lake Forest College for direction and support. I also thank my sister Isabelle Espinosa for additional support and encouragement when writing this review.