The GABAA receptor (GABAAR) is a pharmacological target of many anxiolytics and anticonvulsants, but requires further study to improve current drug-related problems. Between 1996 and 2013, the number of adults filling a benzodiazepine prescription increased by 67%. Even more worthy of attention is the > 4-fold increase of benzodiazepine (BZD)-related overdose deaths (Bacchuber et al. 2016). GABAAR is a ligand-gated ion channel; the binding of the neurotransmitter GABA stimulates a conformational change in the receptor, causing an influx of chloride ions to hyperpolarize and inhibit the neuron. BZDs act as positive allosteric modulators of GABAAR by increasing the affinity of the receptor for GABA via conformational changes. Flumazenil competes for the BZD binding site but maintains the state of the receptor as neutral, making it an attractive candidate in reversing BZD- dependence. Due to the existence of multiple GABAAR isoforms, targeting drugs to a specific isoform to avoid unwanted side effects remains an unsolved puzzle. The Anxiety and Depression Association of America reveals anxiety is one of the most common mental illnesses in the country. A more detailed map of GABAAR would therefore yield translational benefits for many people.

The structure of the receptor would provide insight into unanswered questions about the residues critical for binding GABAAR-targeting compounds. The GABAAR is a pentameric protein composed of five subunits; the most predominant is comprised of specific subunits arranged in a counter clockwise manner when viewed from the synaptic cleft: β2-α1- β2- α1-γ2. Zhu et al. (2018) sought to obtain a high-resolution structure of the physiological pentameric receptor in order to better understand key structural features involved in GABA and flumazenil recognition. Before the work of Zhu et al. (2018) the structure and interface-specific ligand binding were mostly established via functional studies (Baumann et al. 2012, Sigel et al. 1992) Knowledge regarding the structure of the GABAAR was further advanced by homology modeling based on solved structures of nAChR receptors, which belong to the same class of ligand-gated ion channels. Zhu et al. (2018) solved the first physiological structure of GABAAR in 3.9 angstroms resolution, providing a more intricate blueprint of the receptor.

Zhu et al. (2018) solved the structure with cryo-EM, a method used to determine protein structures by trapping molecules in different orientations and summing them into a 3D model. One of the challenges in obtaining protein structures is capturing them in one conformation because they are constantly moving and changing in response to the surrounding environment. This dynamic trait can be related to humans; people are constantly changing their moods, body languages and expressions as they encounter different modulators and environments in their lives. Capturing a person in a specific state becomes difficult, requiring the aid of a camera to freeze him/her in time. It is in fact the freezing of protein molecules that allows cryo-EM to capture them in their specific states. The sample is submerged in liquid ethane rapidly, avoiding formation of ice crystals while trapping the protein molecules in different orientations. When the microscope shines an electron beam at the samples, each orientation of the protein results in a unique “shadow.” However, these unique shadows comprise the same protein and must be put back together. The photograph of a person must be glued together; some scraps of paper contain the facial expression while other ones reveal the positions of the arms and legs. The images in the same orientation (i.e. all the scraps containing the face) are summed, and the process is repeated for all other orientations. Ultimately, all the scraps are glued together to form one complete picture of a protein.

The researchers’ methods allowed them to obtain a physiologically relevant structure that confirmed structural speculations from functional studies. While cryo-EM typically does not yield structures as high in resolution as those obtained from X-ray crystallography, researchers can avoid the arduous sample preparation required for crystallization. In an interview, the project’s principal investigator Ryan Hibbs mentions, “cryo-EM is much faster” and “you do not need to coax your protein into forming nice crystals. Membrane proteins in particular are very hard to crystallize.” Because the proteins are “trapped” in one conformation, the structure becomes easier to solve. A challenge remains in obtaining structures reflective of their natural conditions, like obtaining candid images of people. People may not want to reveal their true states in front of a camera. Proteins are often treated with compounds to facilitate cooperation for the photoshoot, which can often lead to molecules sporting on a poker face: an unrealistic representation. Zhu et al. (2018) photographed the GABAAR in complex with Fab antibodies, GABA and flumazenil. Fab antibodies facilitate particle alignment and eliminate the dynamic state of the receptor while the ligands force the receptor to undergo a specific conformational change to accommodate them. Zhu et al. (2018) remain confident in the candid nature of their photo, though, as the construct retained similar binding affinities. Another obstacle in capturing a non-candid image of proteins is structural alterations imposed by the detergent makeover they undergo before the photoshoot. Removing some of the cosmetics and returning the protein to its natural state can make the difference between a distorted and genuine image. Zhu et al. (2018) report a deviation in the transmembrane domain (TMD) of their receptor from the five-fold symmetry observed in homopentameric receptors, a discrepancy that could affect the extracellular domain (ECD) of the protein; however, the lab has addressed this issue. Ryan states, “We were worried about this. We now have structures in lipids where the TMD looks like we thought it should, and the cytoplasmic domain is in the identical conformation what it was when the TMD looked funny. So, we remain confident in the physiological relevance of the cytoplasmic domain conformation […].” When the structure was solved, the arrangement of the β2-α1- β2- α1-γ2 subunits in a counter clockwise manner confirmed previous functional studies. The researchers then proceeded to characterize ligand binding.

Treating the receptor with GABA allowed Zhu et al. (2018) to suggest specific residues involved in stabilizing its carboxy and amino termini in the two β2-α1 interfaces. β2 is comprised of aromatic residues that surround the amino nitrogen of the neurotransmitter, while a phenylalanine and a tyrosine contribute cation-pi interactions. The α1 subunit is proposed to form electrostatic interactions with the carboxylate end of GABA (See Fig. 1 for structure). Additional interactions include a possible hydrogen bond from a threonine residue and hydrophobic interactions from phenylalanine (Figure 2).

Flumazenil and the BZDs bind the α1-γ2 interface. Four tyrosines form an aromatic “box” around its amino nitrogen. The benzene ring of flumazenil forms π–π-stacking interactions with an additional tyrosine. Additional serine residues lining the front wall of the box may also compliment flumazenil’s diazepine, imidazole and ester groups. Another finding was a histidine residue absent in the other receptor interfaces. H102 is proposed to hydrogen bond with the fluorine atom of flumazenil. (Fig. 3). Perhaps what’s most intriguing is that the critical residues for binding GABA and flumazenil are not present in the empty interfaces: α1- β2 and γ2- β2, providing a potential explanation for their exclusion from these sites.

The work of Zhu et al. (2018) opens doors for future studies to validate their proposed model. The resolved structures were ~3-3.9 angstroms, a range that mainly resolves features of the peptide backbones. Thus, Zhu et al. (2018) could only speculate the key residues involved in interacting with the ligands and whether they are essential in the function of the receptor. Mutating the residues found to stabilize the amino and carboxy termini of GABA, as well as the aromatic “box” residues found in the flumazenil site would increase confidence in the model. The effects of these mutants on binding can be tested using radioligand binding assays, while differences in the extent of hyperpolarization can be measured using patch-clamp experiments.

An unanswered question remained related to the structural bases accounting for the agonistic and antagonistic natures of BZDs and flumazenil respectively. Regarding this question, Ryan kindly pointed out a new finding from Masiulis et al. (2019): “They found, to my surprise, that diazepam binds in a flipped orientation compared to flumazenil. They hypothesized, in comparing their structure with ours, that diazepam binds deeper in the subunit interface than flumazenil, and thereby may better stabilize a compact, activated conformation of the receptor. This idea seems logical to me. It remains a great question, and not a clear answer yet, because all the channels are in some kind of closed conformation, so it is unclear how diazepam is really stabilizing an open channel state- it should be based on all the functional analysis.” It would thus be worth to obtain photographs of the GABAAR in multiple moods, such as in an open channel conformation, to advance what is known regarding receptor agonists and antagonists.

The results of Zhu et al. (2018) add another piece to the puzzle of GABAAR -targeted pharmacology and leave more gaps to be filled by future scientists. The researchers verified they produced a physiological model and generated the first high resolution hetero-pentameric receptor while illustrating potential key structural components of ligand selectivity. Zhu et al. (2018) proposed stabilizing interactions for GABA and flumazenil binding and showed the absence of these structural features in the empty interfaces. This first high-resolution structure of the GABAAR segues into future structure-based drug design. This can include drugs designed to interact with residues unique to a subunit, interface, or specific isoform of the GABAAR; multiple isoforms for each subunit exist, without even factoring alternative splicing variants! Ryan adds, “now that we know what the receptor looks like, in theory, chemists should be able to rationally target it with compounds that might be more selective for GABA receptor subtypes that are not in addiction circuits in the brain.” The GABAAR puzzle is far from being complete, requiring the collaboration from various disciplines to develop more targeted and personalized medicine. Nonetheless, cryo-EM remains at the forefront of these discoveries, capturing candid moments that bring researchers closer to understanding the true wonders of nature. 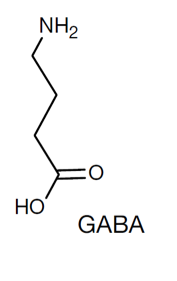 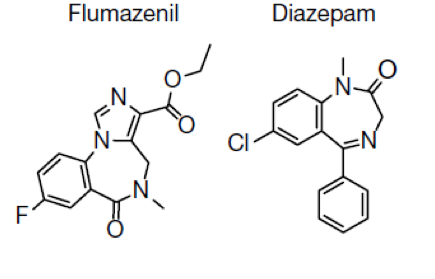 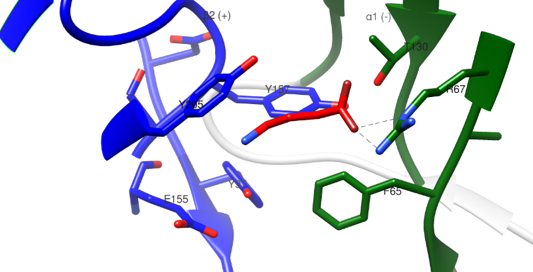 Figure 2: The GABAA β2-α1 interphase accommodates GABA through conserved aromatic residues and interactions that compliment the amino and carboxylate ends. Shown is one of the GABA beta2-alpha1 binding site, in which the (+) represents the principal subunit and (-) represents the complimentary subunit. The residues of the GABA-A receptor are depicted as one letter codes. GABA is depicted as the red molecule, with its amino end in blue. The proposed electrostatic interactions between R67 and the carboxyl oxygen of GABA are shown as dashed lines. Figure generated from Chimera with the authors' PDB (conformation A, 6D6U). 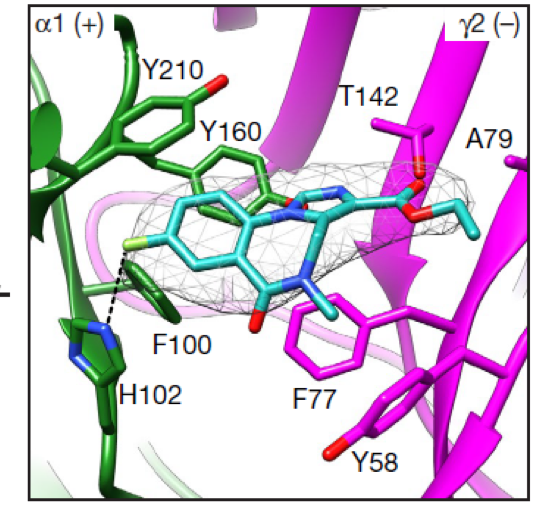 Figure 3: The α1-γ2 interphase accommodates flumazenil through conserved aromatic “box” residues, as well as pi-stacking, electrostatic, and hydrogen-bond contributing residues. Shown is the flumazenil α1-γ2 binding site, in which the (+) represents the principal subunit and (-) represents the complimentary subunit. The residues of the GABA-A receptor are depicted as one letter codes. Flumazenil is depicted as the light molecule, with its fluorine atom in light green forming a hydrogen bond with H102. Figure obtained from Zhu et al. (2018).

in the γ subunit of the γ-aminobutyric acidA receptor that determine ligandbinding and modulation at the benzodiazepine site. Mol. Pharmacol. 52,874–881 (1997)