Epilepsy is a pervasive disease characterized by increased neuronal firing rates and seizures. Alzheimer’s disease is a pervasive dementia characterized by buildup of the Amyloid-β (Aβ) protein in the brain’s extracellular space as plaques. Research has shown that Aβ levels are regulated by synaptic activity, and increased Aβ expression has been observed in a kainic acid (KA)-induced rodent model of epilepsy. Based on observations of increased dentate gyrus hippocampal neuronal death in this rodent model of epilepsy, we hypothesized that the dentate gyrus (DG) would have increased levels of Aβ in KA-injected mice compared to a control group. To test this, C75BL/6J mice (sex unknown) were given KA injections and perfused seven days later. Immunohistochemical staining for Aβ was conducted on sectioned brain slices to quantify Aβ distribution. Increased Aβ expression was found in the CA1 slm region compared to the dentate gyrus (DG) mo region, and interestingly, this difference was only significant in the KA-injected brains. There was no significant Aβ expression difference between the KA-injected and saline-injected brains for the CA1 slm and DG mo regions. It was concluded that increased CA1 slm Aβ levels in KA-injected mice may be due to KA-induced seizure-driven synaptic activity in this region. These findings have important implications for the study of Aβ hippocampal distribution and this protein’s link to epilepsy.

Over 65 million people worldwide have epilepsy, making it an extremely pervasive disease (Milligan, 2017). Epilepsy degrades the quality of life for those affected, increases mortality rates, and treatments are often ineffective. Seizures (caused by neuronal hyperexcitability and hyperactivity) are a hallmark of epilepsy. Seizures can occur in hippocampal neurons and can be induced in animal models (such as mice or rats) via kainic acid (KA, a glutamate analog) injection into the hippocampus (Stafstrom, Thompson, and Holmes, 1992). The seizures resulting from KA injection in particular model temporal lobe epilepsy (TLE). Prior research has revealed Amyloid- β (Aβ) senile plaque buildup in both TLE and Alzheimer’s disease (AD) (a dementia with increased risk of development in TLE patients), indicating that these diseases may have a common underlying etiology (Mackenzie and Miller, 1994).

The Αβ protein is formed by the cleavage of the much larger Aβ precursor protein (AβPP) by β- and γ-secretase (Esch et al., 1990; Zhang, 2010). Two forms of Aβ can result after AβPP cleavage: Aβ40 and Aβ42, Aβ42 being more prone to aggregation. In the brain’s interstitial fluid, Aβ can bind to itself and form senile plaques, a hallmark of AD. AβPP is a transmembrane protein that, after production, is quickly trafficked to the axon (Koo et al., 1996). While on the axonal cell membrane, the protein is either released or internalized. AβPP is often endocytosed rapidly, after which Aβ has been detected in cell culture media, indicating that this endocytic pathway may be responsible for Αβ release into the interstitial fluid (Koo and Squazzo, 1994). After Aβ cleavage, the protein may localize at the synapse in pre-plaque aggregations (Klementiva et al., 2017).

It has been shown that neurons with Amyloid-β precursor protein (AβPP) are prevalent in the hippocampus and other temporal lobe areas (Sheng et al., 1994). Interestingly, AβPP may be important to synapse formation and function (Priller et al., 2006). Additionally, secreted AβPP has been shown to be protective against seizures (Steinbach et al., 1998), and over-expression of ΑβPP has been linked to mouse death and seizure susceptibility (Westmark et al., 2008). Increased synaptic transmission is linked to AβPP endocytosis, resulting in Aβ production and release into the interstitial fluid (Cirrito et al., 2008). Additionally, dentate gyrus and CA3 hippocampal

neuronal death has been observed after KA injection and epilepsy development, which may be connected to Aβ levels.

Here, we hypothesized that in a KA-induced mouse model of TLE, synaptic activity-mediated Aβ levels in the dentate gyrus of the hippocampus would be increased compared to saline-injected rats. It was found that in KA- injected mice, the dentate gyrus molecular (DG mo) region had a lower Aβ staining level than the CA1 stratum lacunosum-moleculare (slm) hippocampal region, refuting our hypothesis. This Aβ expression difference was not significant in the saline-injected mice. Additionally, there was no significant Αβ expression difference for the CA1 slm and DG mo regions based upon injection condition.

To test our hypothesis, P22 to P30 mice (C75BL/6J line, sex unknown) hippocampi were anesthetized with inhaled isoflurane and injected with either 100 nL KA or saline (as a control) into the dorsal hippocampus (Hedrick et al., 2017). After 7 days, the mice were anesthetized via ketamine/xylazine cocktail injection and perfused with paraformaldehyde (PFA), and their brains were removed and sectioned into 100μm slices. The injection side of each slice was marked by punching a hole into the slice, however, information pertaining to whether the hole represented the injection hemisphere or the non-injection hemisphere was lost. Slices were stored in a liquid cryoprotectant solution until experimentation.

Immunohistochemical (IHC) staining on 14 brain slices was conducted to assess the expression pattern of Αβ across both experimental conditions. Before staining, slices were transferred to phosphate-buffered saline (PBS) solution. They were then incubated in a blocking serum solution consisting of 5% bovine serum albumin (BSA, Lampire 7500814), 0.5% triton-X100, and 2% normal goat serum (NGS, Sigma G9023) in PBS. The slices were then transferred to a 1:3,000 dilution of monoclonal mouse anti-Aβ antibody (Novus Biologicals MHC Class II Antibody

3D6, obtained from the Robert Vassar lab of Northwestern University), and later to a 1:2,000 goat anti-mouse secondary antibody solution (ThermoFisher 62-6520), followed by a 0.3% hydrogen peroxide wash. This was followed by an avidin-biotin complex (ABC, Vector Laboratories kit) incubation and a 3,3’-diaminobenzidine (DAB, Sigma D4293) reaction before section mounting. After mounting, the sections were dropped in decreasing concentrations of EtOH to rehydrate before being stained with a cresyl violet solution, and subsequently dropped in EtOH again to dehydrate. Stained sections were coverslipped with the glycerol-based mounting medium Mowiol and allowed to dry before imaging. Two IHC runs were conducted, the first as an optimization run (from which it was concluded that the 1:3,000 dilution of CD6 antibody yields higher-quality staining with less background than the 1:1,000 CD6 dilution) and the second as a data-gathering run. This data-gathering run used the 1:3,000 dilution of CD6 antibody for all slices, excluding the negative control slice, which was not incubated in primary antibody.

Images were taken of the hippocampal region one day after cresyl violet staining. Both KA-injected (n = 5) and saline-injected (n = 3) slices were imaged. For each brain, the images were stitched together using the Fiji ImageJ Stitching plugin. Next, the optical density (OD) of the regions of interest (CA1 slm [stratum lacunosum-moleculare], dentate gyrus mo [DG molecular layer], and DG sg [granule cell layer]) was quantified for both sides of each brain based on the mean intensity value for each region obtained through Fiji.

The following equation was used to calculate the OD, where a higher OD value indicates darker DAB staining:

The DG sg region was used to gauge the background level of Aβ staining, as this region is composed primarily of cell bodies (Amaral et al., 2007) where a low expression of Aβ was observed. The DG sg OD was subtracted from both the CA1 slm and DG mo OD, giving a relative OD for each brain region. These ODs were compared using two- way ANOVA in the SPSS computer program.

The fact that synaptic activity regulates Aβ interstitial levels (Cirrito et al., 2008) indicates that this protein may be expressed more in synapse-dense regions, as does the finding that Aβ pre-plaque aggregates localize to the

2011). The GABAergic CA1 slm interneurons integrate this excitatory input, utilizing feedforward inhibition in their interactions with the CA3 region to down-regulate excitatory input in the hippocampus. Thus, increased Aβ may impact hippocampus circuitry and the regulation of excitation in the region.

These results have important implications for the study of Aβ hippocampal distribution. Future studies should examine the role of CA1 slm Aβ senile plaques in both TLE and AD as well as examine in more depth the mechanism of AβPP transport to the synapse, and Aβ’s specificity to the synapse. Because KA-induced-seizure differences have been observed based on age in rats, future studies should explore a wider age range of rodents, as well as longer and shorter KA incubation times before perfusion (Stafstron et al., 1992). If a KA-injected subject is allowed to develop more seizures before sacrifice, then a greater Aβ buildup in the hippocampus may be observed. To explore in more depth the distribution of later-developing Aβ plaques, future studies should explore methods such as Congo red and silver impregnation methods (Ikeda, 1989).

Although the role of Aβ in AD appears to be reasonably well understood, the function of the protein itself is still a subject of debate. One study found that Aβ may actually improve rat hippocampal neuron survival in vitro (Whitson, 1989). Another study found that Aβ, when incorporated into a lipid bilayer, can form cation-selective voltage-independent channels (Arispe et al., 1993); (Durell et al., 1994). The exact physiological presence or function of this Aβ channel is unknown, however, it has been considered a potential therapeutic target (Pollard et al., 1995). This shows that Aβ cannot be approached simply as a disease-causing protein; its non-pathological function and significance must be better understood before Aβ is used as a therapeutic target in AD. Due to the potential importance of AβPP, therapeutic targets that alter AβPP function or levels have been considered by some to be problematic (Parsons and Rammes, 2017). Clinical trials in various phases are currently being conducted to target AD, and suggested therapies include immunization against Aβ.

In conclusion, future studies should examine in more depth the role of Aβ in TLE, and the relationship between synaptic activity and Aβ levels. Experiments such as this one should be conducted with a larger sample size and concur with the exploration of other IHC protocols.

Thanks to Dr. Tristan Hedrick for generously supplying us with KA and saline-injected mice brain sections and for instructing and advising us throughout our experimental procedure and write-up. Thanks to the Lake Forest College Neuroscience Program and Biology Department for funding this research, providing laboratory space, and supplying some reagents. Thanks to the Northwestern University Robert Vassar Lab for generously supplying us with the Novus Biologicals 3D6 Aβ primary antibody. Thanks to Y. Ganev for data analysis advice, and to S. Kogan for additional support. 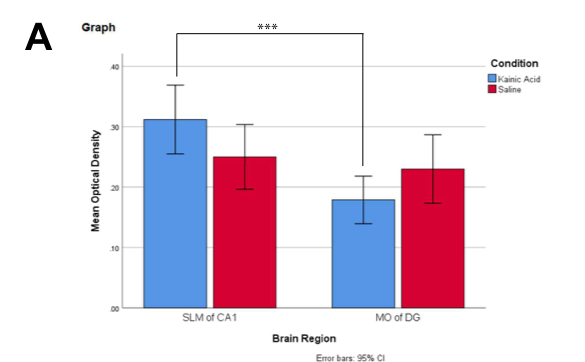 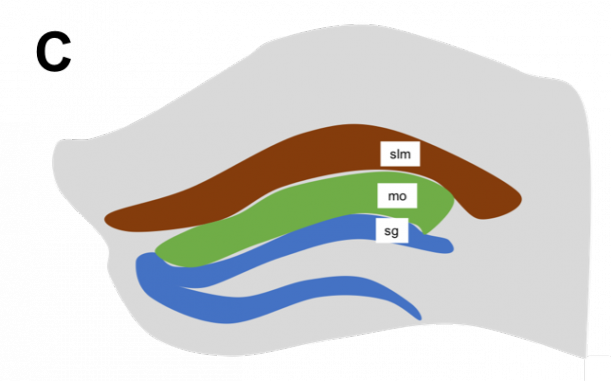 Figure 1: (A) Bar chart of ANOVA results with color-coded condition (KA or saline injection) for the CA1 slm and DG mo regions and (B) side-by side comparison of KA and saline-injected mouse hippocampi. Images are of DAB staining only, and were obtained from raw IHC images through Fiji ImageJ software (note: the SA image is slightly more zoomed-in than the KA image; in reality, structures are approximately the same size in each brain). (C): reference animation for the CA1 slm, DG mo, and DG sg regions.