Demystifying the Brain in Chicago

On March 23rd, in the cool chill of spring, I rushed out of my Chemistry class to board a bus headed to Chicago. On this day, the Chicago Society for Neuroscience (CSfN) held its prestigious annual conference at the Northwestern Memorial Hospital. I, alongside nearly seventy classmates, were in attendance. For me, the conference represented an opportunity to experience a professional scientific meeting and to delve deeper into the field of neuroscience. For other students and professionals this conference was an opportunity to proudly showcase and discuss compelling new research. Scientists from across the Midwest represented their labs and colleges/universities in symposia and poster competitions.

My time at the conference began around eleven in the morning, just before the halls burst to life with students walking briskly to their posters in preparation to share and be judged on their work. Students’ research highlighted new advances in understanding how the brain functions and exciting procedures which have the potential to be turned into medical treatments in the near future. As I joined the growing crowd, I felt a sense of awe at the dozens of posters and discoveries that were being presented before me. At one poster (the eventual winner of the undergraduate poster competition), Leticia Perez 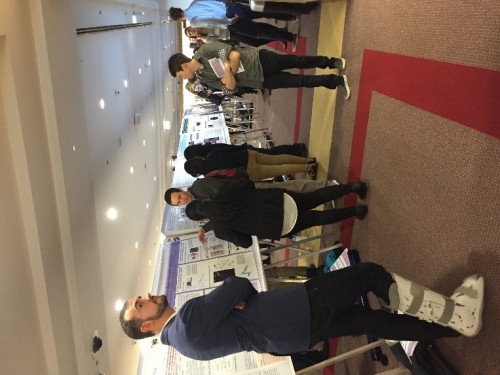 explained to me her work on memory in sea slugs, and how even forgotten memories are stored in an animal’s genes. Though it was already a familiar process to me, Ms. Perez described how one can cause sensitization; a long-term increase in neuronal response to a stimulus, in sea slugs by spraying a jet of water at the animals’ siphons alongside administered electric shocks. After this, Ms. Perez discussed how she found changes to the RNA of the sea slugs after being sensitized, and how around two percent of these changes continued to be present in the sea slugs two weeks after they last showed a heightened response to the water jet stimulus. As Ms. Perez put it, “This suggests that there is a kind of unconscious memory, where our bodies remember an event even after we forget that it happened”. Ms. Perez also claimed that this was the first time that these prolonged changes in RNA were found in relation to memory, making her presentation all the more special.

While the posters captivated me and kept me busy for the afternoon, like all good things, they had to come to an end. As the clock struck two, I moved into the main conference room, and 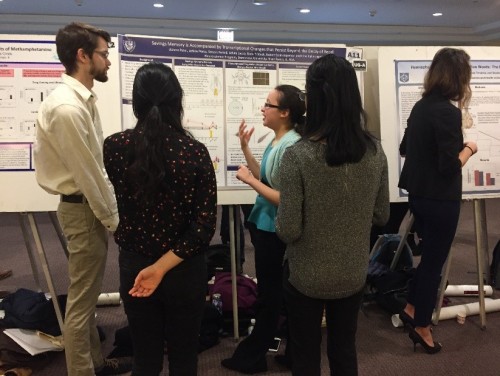 listened to six graduate students give fifteen-minute talks on their various research topics in the aptly named “graduate student symposium”. As the talks went on, I noticed a rather fortuitous coincidence, in that two of the graduate students gave presentations on the genetic effects of alcohol consumption that complimented each other quite nicely. In the first of the two talks, a graduate student from the University of Illinois, Evan Kyzer, explained how in his research he had found that intermittent alcohol exposure caused mice to display an increase in anxious behavior. This change in behavior, he said, was a likely a result of changes to RNA in the mice. He observed that by inhibiting a certain type of microRNA, a strand of RNA that helps regulate gene expression, he could cause the cessation of the alcohol-related anxious behavior. Mr. Kyzer ended his talk by discussing how humans with alcohol use disorder show heightened levels of the same microRNA found in the alcohol-exposed mice, and how future treatments for alcohol abuse may investigate these genetic changes. The second talk on alcohol, given by a graduate student at Loyola University, AnnaDorothea Asimes, explained how children could be affected by parental alcohol use even outside of pregnancy. Ms. Asimes explained that her research showed drinking by either parent could lead to changes in DNA expression in their child. These changes, she said, likely have the effect of decreasing the child’s baseline stress response, meaning that the child will be more anxious. While not the explicit point of the symposium, these talks provided an easily accessible example of how a common substance can impact our genes, and how those genetic changes can affect our brains.

As the graduate talks wound to a close, it was time for the final lectures of the day. A choice was presented to attendees in the form of two concurrent symposia, one on movement disorders, and the other on biotech applications in neuroscience. As biotech is a field that has interested me for years, that is the symposium I chose to attend. While all the lectures were intriguing in their own ways, one stood out to me as particularly significant. The talk, given by Stephen Miller, discussed how his lab had found evidence that autoimmune disorders, such as multiple sclerosis, could be treated using nanoparticles. The idea, as Dr. Miller described it, is that immune system tolerance to myelin, the part of brain cells targeted in MS, can be built by exposing immune cells to nanoscopic pieces of the substance. This immune tolerance, he said, can then cause the prevention or stopping of immune cell attacks on bodily tissue effectively curing, in this example, MS. Dr. Miller claimed to have shown the efficacy of this procedure in animals already, and is working with his university, Northwestern, to bring the treatment to the public. As I understand it, if Dr. Miller is successful, then there may be a very real and effective way to cure autoimmune diseases available in the not-too-distant future.

As the conference wound to a close, I gave much thought the experiences I had, and the information that I learned. I think the most significant thing I will take away from my time at the conference was that at any given moment there are an innumerable number of discoveries taking place in the field of neuroscience. This thought is one I find to be very comforting, as it means there is great hope for horrific diseases, such as autoimmune disorders, to be cured within my lifetime. Also, that prospective scientists, such as myself, should have little trouble finding a meaningful research topic that they are passionate about. My experience at the conference also instilled upon me the importance of events such as this one. Even with a research tool as powerful as the internet at my near constant disposal, I can think of no better way to immerse oneself in new information than to meet and speak with a crowd of experts in a given field. In later discussions of the conference, I learned this impression was shared by a fellow classmate of mine, Ruqia Bibi, as she said that the conference allowed her to learn an incredible amount about neuroscience, “without even reading a book.”. Ruqia also agreed that the discussions made possible by meeting other attendees and presenters proved invaluable in helping to comprehend both the work presented and gain a deeper understanding of the field of neuroscience as a whole. Overall, the CSfN conference left me with a feeling of excitement for the future, and anticipation to see what new discoveries may be presented this time next year.

I started this paper, as I usually do, by spending some time (perhaps 30 minutes to an hour) thinking of both a title, and the general feeling I wanted the paper to have. As this paper was meant to be a journalistic report, I decided the best way to both explain the information learned at the conference and convey to the reader a feeling of excitement/importance was to use the first person and write the essay almost as a story. I also gave thought to what information I wanted to include in my essay and decided that information from 1-2 presentations from the poster competitions and each symposium would be enough, if not too much, to include. At this point I wrote the first draft of my essay, trying to relive the events of the day of the conference as I wrote the introduction, each body paragraph, and the conclusion. After finishing this draft, I realized I was several hundred words over the word limit, and therefore went back and deleted a fair amount of exposition and an entire section on a poster I had visited. This got the paper to within about eighty words of the limit, and from there I reread the paper several times, adding and removing information as I saw fit. After the essay was safely under the word limit, if only just, I reread the paper twice more, editing for grammar and sentence structure/flow.