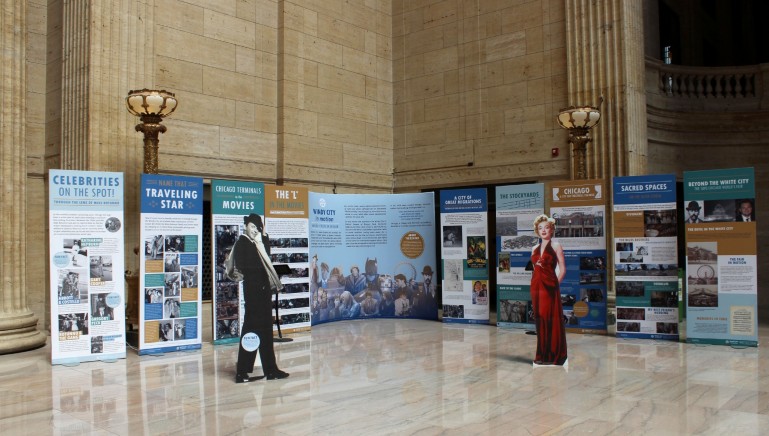 A collaboration between Lake Forest College’s Digital Chicago: Unearthing History and Culture, and DePaul University’s Chaddick Institute for Metropolitan Development, “Windy City in Motion: Movies & Travel in Chicago” debuts at the Great Hall at Union Station August 17, 2016. Viewers can travel through classic and contemporary films set in the Windy City and its transportation hubs. Take in vintage photos of movie stars, clips and commentary on films, and little-known facts about Chicago’s movie and transportation history.

The exhibit is free and open to the public, and will be on display at least through the early winter season.

The work of Ben Goluboff, associate professor of English, on Kenneth Sawyer Goodman’s one-act play “Back of the Yards” offers a jumping-off point on the panel “The Stockyards” through which to explore movies about Chicago’s historic Union Stock Yards.

In “Chicago: A City for Theatrical Training,” Assistant Professor of Theater Chloe Johnston’s work on the history of ensemble-generated theater in Chicago suggests a closer look at actors and actresses who have emerged from Chicago’s world-class improv scene.

Professor of Music Don Meyer’s research into the music of the 1893 World’s Columbian Exposition anticipates this fall’s release of “The Devil in the White City.” The panel “Beyond the White City” looks back to a world’s fair before the advent of moving pictures

Desmond Odugu, Assistant Professor of Education, traces the history of housing discrimination in Chicago, and in “A City of Great Migrations,” shows how the changing character of Chicago’s neighborhoods is reflected in films old and new.

Associate Professor of Religion Ben Zeller’s 360° immersive digital tours of Chicago sacred spaces asks that we look, also, at Chicago religious sites that have held starring roles in many films.

For updates about “Windy City in Motion,” follow Digital Chicago on social media: