The Environmental Studies Program has been taking the senior seminar students down the Mississippi River each year to learn in the field about how we are connected to the great river and to the Gulf Coast of Louisiana into which the river drains. Learn with us as we make our journey south through updates and individual student research projects.

Come along with us on our Spring Break Trip, along the great Mississippi River and South to New Orleans. 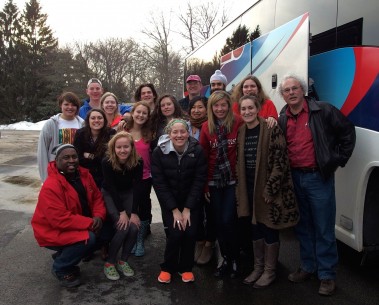 We drove all of Friday night in order to get to our first destination: the area surrounding St. Louis, Missouri. This area is extremely rich in American history and ecological features. Just west of the Midwestern city is the small town of Collinsville, Illinois, which is home to the remains of the largest pre-Columbian civilization north of Mexico. This civilization was an immense group of mound-building peoples of the Mississippian culture. We call the location Cahokia after the people who lived there when European settlers first came to the area, however they were not the people who built the great earthen mounds, and not a lot is known of the original occupiers. What is known is that these people were able to sustain a large population by growing agricultural surplus in the floodplain of the Mississippi River. 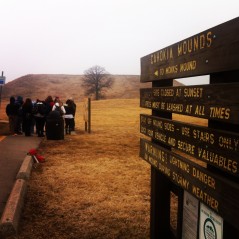 Just north of Cahokia Mounds is the Melvin Price Lock and Dam Structure – the 26th and second to last such structure on the Mississippi River. Our group toured the lock structure as well as the National Great Rivers Museum. 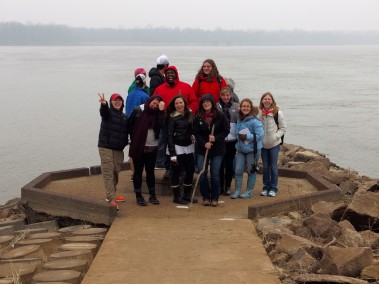 We stopped for a brief lecture at the confluence of the Mississippi and Missouri Rivers. These two rivers do not mix immediately, but rather they maintain separate properties for several miles south. The Mississippi headwaters are in the rich coniferous forests of Minnesota, while the Missouri headwaters come from the arid high plaines of Montana, making for very different chemical compositions between the two rivers.

Sunday 9 March – To Memphis with the Mighty Quapaws

Waking up in Memphis was very welcome after the long and cold winter we’d been waking up to in the North. 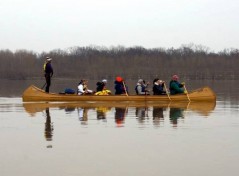 We met the Quapaw Canoe Company (based in Clarksdale, MS) in the Meeman-Shelby Forest in northern Tennessee and they led us down the river in 2 voyageur canoes.

The canoes had been built by the Quapaw rivermen and we rode in “Ladybug” and “Grasshopper.” We learned a lot about the river while paddling down it, and saw a lot of birds and other people in various watercraft sharing the river with us. Eighteen miles and an island-side picnic later and we were back in Memphis! It was a clear day full of laughs and adventure, and definitely a highlight for a lot of students. Here, Carley writes down the recipe for the campfire catfish lunch we had with the Quapaws.

Monday 10 March – Here’s to the state of Mississippi

All of Monday was spent traveling throughout the state of Mississippi. First stop: Clarksdale, city in the Mississippi delta (geographic area), and home of the Delta Blues Museum. We toured the museum then walked around the town, and discovered that even though the buildings and roads appeared to be run down, the area was still abuzz with human activity, and it was interesting to be a part of it. We stopped for a picnic lunch beside the famous Crossroads of highways 61 and 49, which stands as a symbolic location in many delta blues songs and histories. 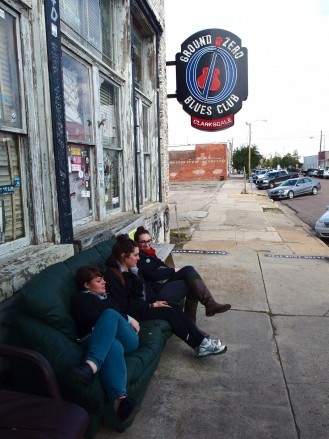 Continuous and flat agricultural fields characterize the delta, although it used to be covered with bottomland swamps. Early settlers came through to drain and clearcut the swamps to use the timber and produce crops on the especially nutrient-rich soil deposited over thousands of years by the great Mississippi River. 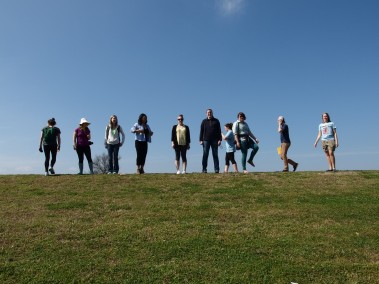 Students climb the levee while in historic Greenville.

Greenville, Mississippi, is another small town nestled on the banks of the river.  This town was at the center of the Great Flood of 1927, as the levee just north of town broke through, covering 27,000 square miles of inhabited space with floodwaters from the Mississippi. We walked along the levee in town then headed south to the Natchez State Park outside of Natchez, MS, where we camped out for the night.

Tuesday 11 March – Uses of the land over time

Our first stop this morning was at the Grand Village of the Natchez Indians. 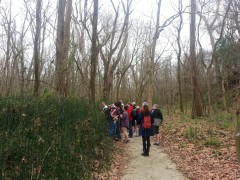 Another mound-building culture, these people lived in the Mississippi River floodplain until French settlers came through the area in the 1700’s. Times were peaceful between the two groups for some time, but eventually war broke out and the Natchez Indians moved west to Oklahoma. There was a mystery to the air at the Grand Village that morning, as if the history we think we know couldn’t possibly be absolutely revealed. 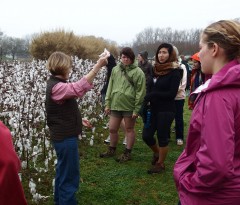 and Gin in Ferriday, Louisiana. This cotton plantation has been in working order for since the early 1800’s! It is part history museum and part modern cotton gin. Lynette Tanner and her husband now run the plantation, and they’ve restored many old buildings to how they would have stood during the height of the cotton industry, including slave quarters, farm houses, and the old gin house. After touring the cotton fields and the restored buildings, we received information about the current cotton economy and production methods.

Onward, south to the Atchafalaya National Wildlife Refuge. This refuge is part of the largest swath of swampland in the country. We arrived at dusk which is a lovely time to witness wildlife anywhere. Many waterfowl were sighted, and the sounds of other birds and critters filled the air. No gators were spotted, as they had been in the past, but we concluded it was just a bit too cold yet for the alligators to surface. 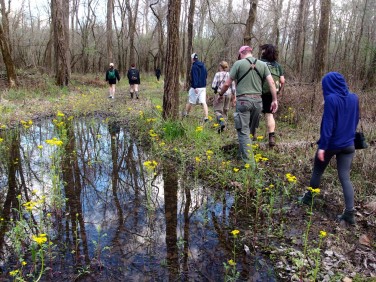 Each day of our trip so far has been packed with adventure, and today was no exception! We started the morning off in Baton Rouge, and drove the rural River Road along the west side of the Mississippi River down to our first stop.
We sighted many plantation mansions down the way, and stopped at Oak Alley Plantation in Vacherie, Louisiana. What a beautiful place and great tour! We learned a lot about what life was like for plantation owners and workers at the plantation. 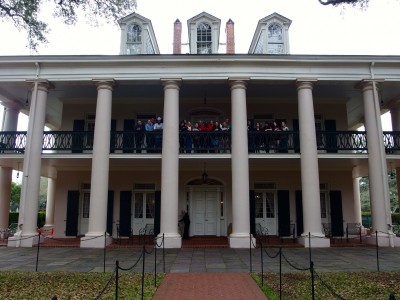 In grand New Orleans fashion, we had lunch at the Gumbo Shop then headed to the Cabildo on Jackson Square for a lecture with friend and New Orleans historian Christina Vella. Christina teaches as Tulane University and spent the afternoon telling us about the architectural history of the Square, as well as the life of Micaela Almonester, Baroness de Pontalba, who was a huge player in the early development of the city center.

Back on the bus for a late afternoon driving tour of the greater New Orleans area. We drove through the Lower 9th Ward and visited Bayou Bienvenue, which is a dead bald cypress swamp and example of what is occurring with land loss all along the Gulf Coast. Almost 9 years after Hurricane Katrina, evidence of her wrath was still visible which juxtaposed the new construction that’s been taking over the worst-hit areas.

We continued the drive out to St. Bernard’s Parish, a suburb of New Orleans. At the outskirts of St. Bernard’s Parish stands a man-made levee and massive concrete flood gates, built to hold back water from which ever side the controller decides to protect. Such a great feat of human engineering is common down here on the Gulf Coast, and is just one component of many in the game to control the forces of the continent’s most powerful waterway. 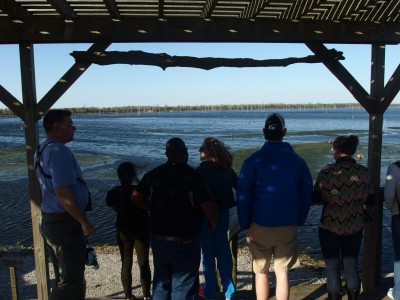 Thursday 13 March – Work and play on the Gulf Coast

A balance between activity and relaxation can be used to characterize one of our last days down south. We woke up in New Orleans and drove a little ways south of the city to the Barataria Preserve, part of the Jean Lafitte 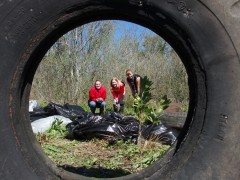 NationalHistoric Park and Preserve. Jean Lafitte was a French pirate and privateer, and got a wetland preserve spanning 23,000 acres named after him. We met Julie Whitbeck, Ph.D, Ecologist with the National Park Service and her crew for a cleanup of part of the preserve. The area we visited had such a large concentration of junk that it surprised  us all how little ground we covered and how much waste we collected. The are used to be a boat yard, so a lot of metal was brought out that we were able to separate for recycling. As you can see from the photos here, we filled up the NPS work truck in a short 2 hours! We had a great time and the NPS crew was happy to have our help. 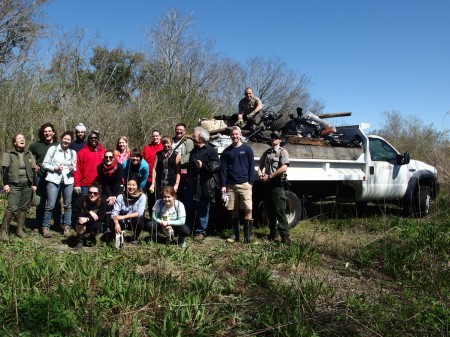 After lunch, we drove south to Grand Isle, Louisiana, one of the barrier islands to the Gulf of Mexico. Where land ends and water starts down here is not so apparent; the Gulf Coast is a very unique place indeed. We set up camp at the Grand Isle State Park and cooked our dinner over the grill while Dr. Susan Scott Parish, Glenn’s colleague from the University of Michigan, gave us a lecture on the topic of her research: the cultural reaction to natural disasters. It was a lovely evening and an even lovelier morning, waking up to laughing gulls and waves beating on the sandy shores of the park. 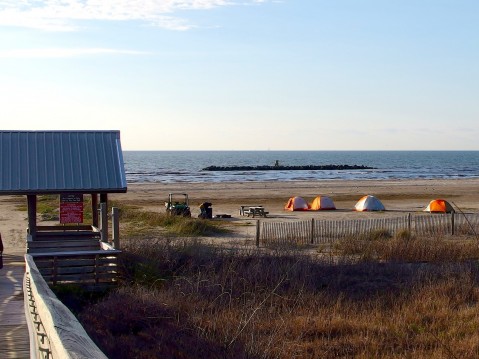 Today was a very open day in the Crescent City. After returning from the Grand Isle State Park, students were free to go about the city for most of the day in search of information for their research projects. Some students visited museums, other visited parks – one student, who’s project is on voodoo culture, managed to hit some of the most popular voodoo museums in the city, including the Backstreet Cultural Museum and the New Orleans Historic Voodoo Museum. 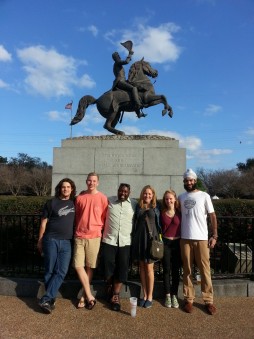 Our group had one final meal together to end off the trip at a classic Cajun restaurant called Mulate’s, which was complete with a live show from Cajun musicians!

The next morning we woke up early and drove straight back to Chicago. We all agree that it was a Spring Break well spent! 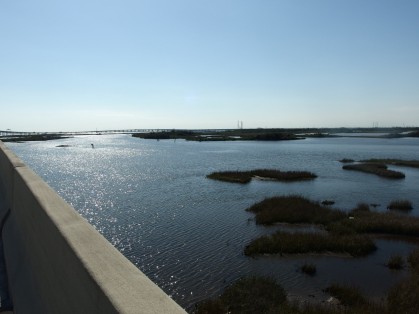 Currently students are working on their individual semester projects, as well as becoming experts on animal and plant species that are native to the Mississippi River area.

The Dead Zone in the Gulf of Mexico

Turbulence on the Mississippi

Flood Control on the Mississippi

Soils Along the Mississippi

The Cemeteries of New Orleans

Why the Levees Broke

Hypoxia in the Gulf of Mexico

Pollution of the Mississippi River

African Americans on the Mississippi Floodplain

Venomous Reptiles of the Mississippi﻿

Native American Legacy on the Mississippi