Pollution on the Mississippi River 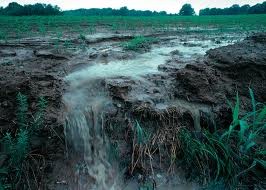 The picture above shows runoff from a farm in Iowa. Topsoil, fertilizer, pesticides, and other potential pollutants are being carried from the farm to the waterway. Agricultural runoff is a form of non-point source pollution, making it difficult to regulate.

Intensive farming practices strip nutrients from the soil. As a result farmers need to add fertilizers to soil to replace the nutrients. 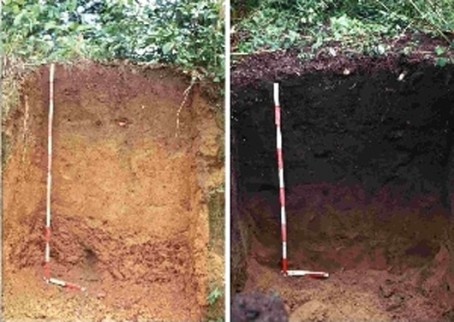 The picture above shows the visual difference that can be seen between nutrient poor soil (left) and nutrient rich soil (right). Corn (maize) is the number one crop in the United States and is very sensitive to nutrient poor soil. In order to have a high crop yield farmers need to fertilize their crops, because under fertilization causes lower crop yields and poor quality produce farmers tend to error on the side of caution and over fertilize their crops.

Over Fertilization Is Not the Only Cause of Agricultural Runoff

As this excerpt from PBS’s Poisoned Waters discusses, large scale industrial farming leads to increased manure production. These industrialized farms produce so much manure that it cannot all be used, forcing farmers to store it. Yet more is produced than can be dealt with and some ends up as agricultural runoff adding nutrients such as Nitrogen into the water systems.

Agricultural runoff adds nutrients like Nitrogen and Phosophorus to the water system causing it to become eutrophic (nutrient rich). Eutrophication can be a natural process, however human intervention such as agriculture dramatically increases the amount of nutrients in water. Algal blooms such as the one pictured above thrive in nutrient rich water. 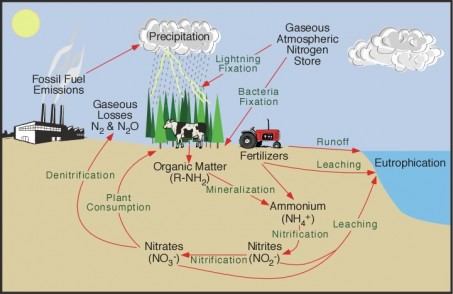 Nitrogen is the most common nutrient leading to eutrophication. Above is a pictorial representation of the nitrogen nutrient cycle. Lightning and bacteria fixate nitrogen from atmospheric stores, organic matter, and fertilizers into the soil. Much of the nitrogen is converted into ammonium and later nitrates that plants use. However, through runoff and leaching excess nitrogen enters bodies of water. 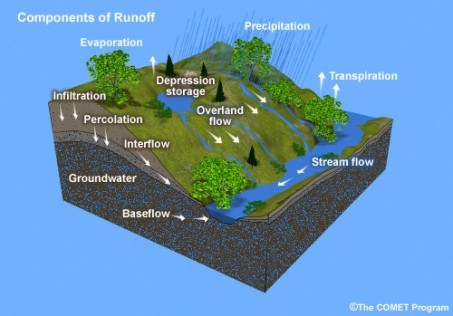 The use of excess fertilizer and the presence of excessive amounts of animal waste becomes a problem when the nutrients are carried into a body of water either by runoff or leaching. Runoff occurs when water, either from rainfall or melting snow, picks up the excess nutrients along with other sediment as it moves over and through the ground towards bodies of water. 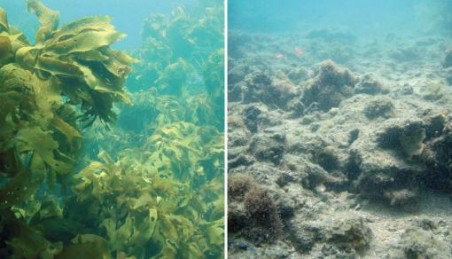 The photo above compares ocean floor in a healthy zone (left) and a dead zone (right). Eutrophication leads to dead zones like the one above as a result of algal growth. Algae grow and die at high rates in nutrient rich areas and use up the nutrients. These algal blooms block the sun from penetrating the water’s surface inhibiting photosynthesis. When algae die they sink to the bottom where bacterial composition takes place, a process that uses much of the Oxygen in the water, leading to asphyxiation and the death of marine life.

Agriculture in the Mississippi River Basin 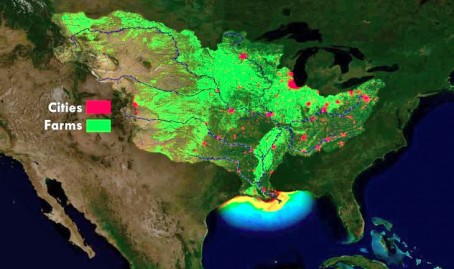 Hypoxic Zone in the Gulf of Mexico 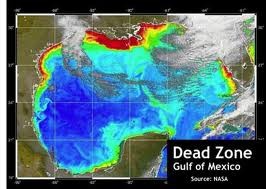 The hypoxic zone or “dead zone” in the Gulf of Mexico is an area that runs along the Louisiana and Texas coast lines. The water at the bottom of the gulf in this area contains less than two parts per million of dissolved oxygen. According to the United States Geological Survey, “hypoxia (in the Gulf of Mexico) is believed to be caused primarily by excess nutrients delivered from the Mississippi River in combination with seasonal stratification of Gulf waters.”

Number of Impaired Waterways by State 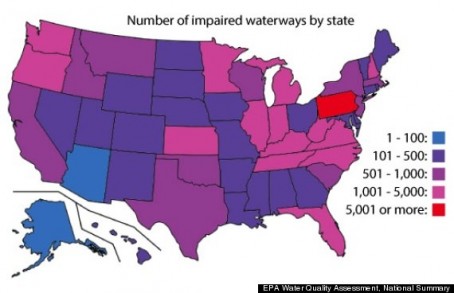 The number of waterways labeled impaired by the Environmental Protection Agency (EPA) is astounding. Above are the results of a Water Quality Assessment conducted by the EPA. Hypoxia is only one of the ways a waterway can become impaired. However, agricultural runoff is the number one contributor to the impairment of U. S. waterways.

Urban runoff is another leading cause of Non-point source pollution. As the number of cities grows so does the amount pavement. Almost none of the water flowing over paved surfaces is absorbed, and therefore it carries all the pollutants on the surface to a water body. 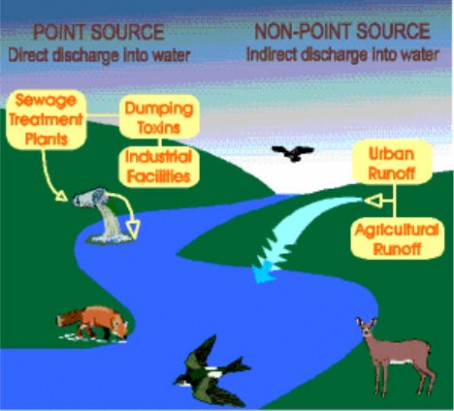 The EPA uses the CWA to enforce water quality regulations. The CWA was enacted in 1972 and in its early years focused primarily on cleaning up Point-Source Pollution. Non-Point Source Pollution is much harder to regulate.

Three Main Goals of the CWA 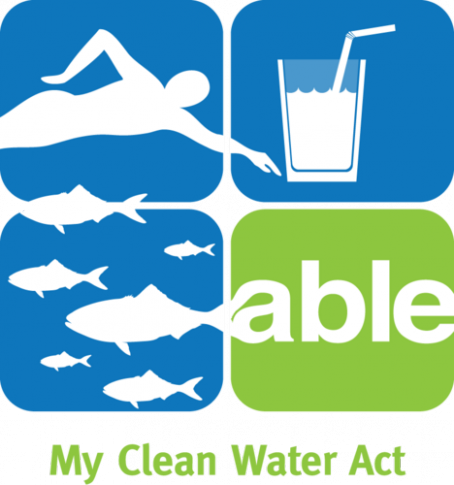 The main goal of the CWA was to reclaim the country’s waters to make them swimmable, drinkable, and fishable. The 1972 Act aimed to make all U. S. waters “fishable and swimmable” by 1985. While there have been many success stories, including Lake Pontchartrain in Louisiana,  the 1985 goal has yet to be met.

Overview of the Clean Water Act

The 303(d) Program creates a list of impaired and threatened waters and identifies all waters where required pollution controls cannot bring the water quality to meet standards. From the list Total Maximum Daily Loads (TMDLs) of pollution are created based on the severity of pollution. A TMDL is a calculation of the maximum amount of a pollutant a water body can receive. Point Sources receive a Waste Load Allocation (WLA) and Non-point sources receive a Load Allocation (LA), the portion of the loading capacity given to one existing Non-point sources. The 40 CFR 130.7 outlines the requirements for States when identifying impaired waters. 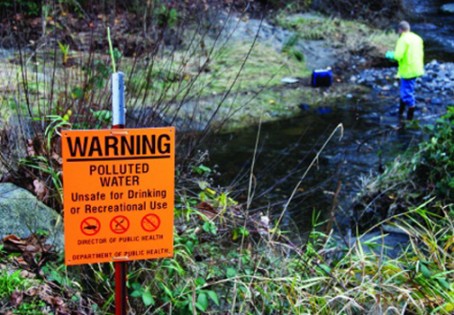 What You Can Do

Suggestions courtesy of the Michigan Department of Environmental Quality. You can find the original document here. 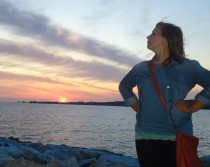 Eutrophication: the process by which a body of water becomes enriched in dissolved nutrients that stimulate the growth of aquatic plant life usually resulting in the depletion of dissolved oxygen.

Asphyxiation:  the condition of being deprived of oxygen.

Point Source Pollution: Water pollution coming from a single point, such as a sewage-outflow pipe.

Non-Point Source Pollution: A contributory factor to water pollution that cannot be traced to a specific spot.