The Hadza language, called Hadzane by its people, is an endangered language isolate spoken in the region surrounding Lake Eyasi in northern Tanzania. Though it has persisted for thousands of years, threats to the future of the Hadza people are compromising one of the worlds most distinct and ancient languages. 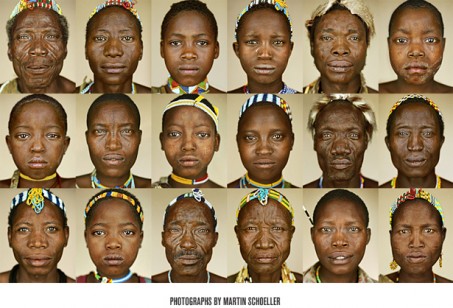 Less than 800 people speak Hadzane today, and the number of fluent speakers is in decline. (www.ethnologue.com)

The Hadza people, who call themselves the Hadzabe, are a culture of nomadic hunter-gatherers who live in Tanzania. Isolated through their remarkably steadfast tradition, they have changed little in 10,000 years. 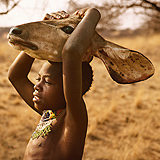 The Hadza people live along the shore of Lake Eyasi in northern Tanzania. Though they have lived in this area for thousands of years, their range has been restricted by the encroachment of agriculture and the designation of state parks.

Analysis of the genetic diversity of the Hadza people in relation to the San click language speakers places the split between the lineages at 50,000 to 70,000 years ago. (Knight) Since the split, the Hadza have remained both isolated and distinct linguistically, genetically, and culturally. (Pennisi) 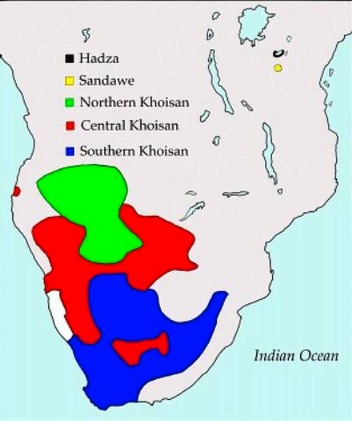 Analysis of the Hadza lexis and grammatical structure has revealed it to be unrelated to any other click language. There are two possible explanation: Hadza originated on its own, or it is related through an ancient proto-click language. (Pennisi)

Hadza has no written language. When written phonetically using English characters, the three different types of clicks, dental, alveopalatal, and lateral, are coded by using |, !, and ||, respectively. While these designate the type of click, there are also variations within each click. The variation in clicks poses many difficulty in translating spoken Hadza into written Hadza.

Listen to hadza words spoken in the UCLA phonetics database 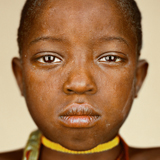 All nouns in the Hadza language are gendered and singular and plural. Hadza is a singular masculine noun, which also serves as a root. Hadzabe, which is the the Hadza people’s endonym, is plural and feminine. A single Hadza woman would call herself hadzako, while a group of Hadza men would call themselves hadzabii. 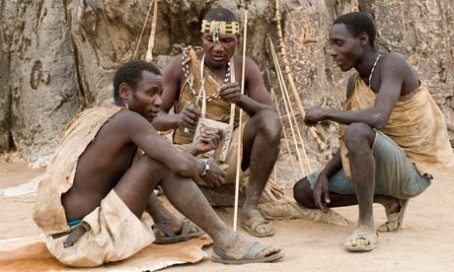 Due to the Hadza’s rigorous language use and strong tradition, Hadzane has an advantage over many other endangered languages in Africa. The Hadza people have proven to be an extremely resilient culture, persisting in isolation through the advent of pastoralism and agriculture. Today, however, land use issues and cultural diffusion present more of a challenge to the future of the Hadza people and their language than ever before. 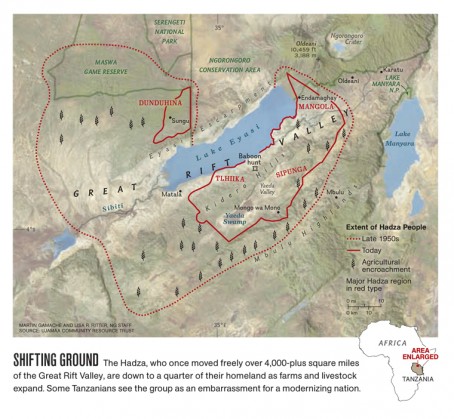 The Hadzabe’s land has been decreased dramatically in the past 60 years.

Of the endangered African languages, Hadza is relatively well studied due to its ancient roots. Many hope that by studying the Hadza people, we can learn more about our own origins as human beings. Similarly, by learning about the Hadza language, we may learn more about the origin of language itself.

A handful of organizations are working to preserve the Hadza language. Efforts are spearheaded by Kirk Miller, who has worked more recently to create a Hadza dictionary. Research into the Hadza is progressing, but it is mostly focused on the Hadza because they may offer clues into the origins of modern humanity and human movement out of Africa.