The Hopi are a tribe of Native American people.  They are 1 of the 30 Uto-Aztecan families, which are tribes that are found in the western United States and Mexico.  The Hopi are an agricultural people who are known for their peaceful ways.  They live on 2,532 square miles of land and have about 18,327 people.  Despite the large population of Hopi people, the language is endangered.

What does it mean for a language to go endangered?

Languages are living things, just like all animals and people around us.  They are created, they evolve, and they eventually die.  Just like species, there are languages that are endangered, and on critical watch.  Others may even be extinct, and have no speakers left.  This webpage is here to help people become more aware of this endangered language.

The Hopi live in Southwestern United States.  Their current reservation is in Arizona, however their lands once touched Utah, Colorado, and New Mexico.  Their reservations are surrounded by the Navajo, another Native American tribe.  This has caused some commotion in the past, but overall, they have settled their differences the best they can.  The Indian Relocation Amendments Act of 1980 has helped clear the problems of where the Navajo and Hopi live.

Hopi in movies and books!

The term Koyaanisqatsi is a Hopi word meaning ‘life out of balance’.  The word was the title of a 1982 film in which there was no spoken words, instead, pictures and clips of people and buildings, directed by Godfrey Reggio, with music composed by Phillip Glass played underneath.

The film shows images and time-lapse footage that are thought provoking and up to the viewer to decide what everything means.  While the director, Reggio, doesn’t have any relation to the Hopi, it is interesting that he uses a Hopi word to name his film. 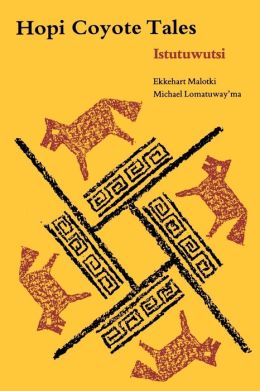 Aliksa’i - “Once upon a time…” The Hopi who trace their ancestry to Orayvi say this.  This was how all of the passages begin.  Each tale is about a different animal or symbol that the coyote meets.  The left side was written in Hopi, while the right side was in English.  The back of the book had a glossary of terms where every animal and symbol was defined.

‘Coyote’ was defined as gullible and gets himself into trouble by believe everything he is told.  Sucker and coyote are synonymous.

Hopi defined themselves as, “Settled here ages ago and still here, but only as tenants of the land, not owning it.”  This has to do with the land being owned by the Navajo people.

The fluent Hopi elders are preserving their culture, since the Hopi children would attend boarding schools and eventually lose the language themselves.  In 1998 a language survey of 200 Hopi people showed that 100% of Hopi elders, 60 years and older were fluent.  Fluency in adults, ages 40-59, was only 84%, young adults, ages 20-39, was 50% fluent, and children, ages 2-19, only 5% fluent.  Thus, fluency is decreasing as ages also decrease.  This means that the language is in danger, and within the next 2 generations, the Hopi language may become extinct.  Young children and adults need to begin to learn, speak, and practice their language so that this language can have a successful future.

This webpage is meant to help learn about endangered languages.  It provides some information on the Hopi people and their language and is here to help support them.  As aforementioned, languages are living things and even though it is often hard to stop extinction, we can try our best to prevent or slow it down.  With this webpage, I hope to spark an interest in the Hopi people and their language and to keep them from going extinct.

Interesting websites to check out!