Have you ever been to a country that is located near the Baltic Sea and is filled with large forests inhabited by wildlife? If so, you may have been in Latvia.  Latvia is located in Northern Europe and is part of the Baltic region.  There are a few different languages spoken in Latvia the main one being Latvian followed by Livonian, Latgalian, and Russian.  The main focus of this webpage will be Latgalian. 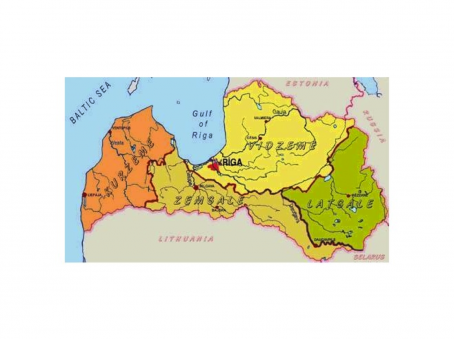 Latgalian is mainly spoken in Eastern Latvia particularly in Latgale, but there are also a few people who speak it in Riga too. 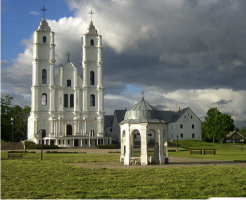 According to the European Commission, “in the early 20th century there used to be half a million speakers of Latgalian, today approx. 150,000 people speak Latgalian as a mother tongue” (European Commission, 1).  Latgalian is also part of the Baltic language family (Kalsbeek, 5).  It is closely related to Catholicism too (Lazdina, 1).  According to the European Commission, “in 1919 it was declared the official language of Latgale; in the first parliamentary era in Latvia (1920-1934) it lost its status as an official language and was considered a dialect of Latvian by the government” (European Commission, 1).  This became a very difficult time for the Latgalian speakers, because in 1934 the language became banned.  Latgalian was banned from public functions, printing, and schools (Lazdina, 1).  By this ban, the only way that the language could survive was by the people speaking it within their homes.  In 1991, the ban against Latgalians was lifted, but there were still limits on no public signs and they were very limited on education (Lazdina, 1).  Today, “about 10 books are published in Latgalian every year. On Thursdays from 2:15p.m. to 2:45p.m. a programme is broadcast on Latvian Radio 4. After a period of nearly ten years Latvian television stopped broadcasting programmes in Latgalian in 2000. The website of the Latgalians’ online magazine is not currently active” (European Commission, 1). This shows that even today it is still hard for Latgalian to become publicly known again. The only media that Latgalians have today are the Catholic Life Magazine and their radio station (Kalsbeek, 20). Moreover, Latgalian became important to speak within the homes and in some schools to help keep it alive. 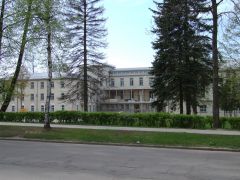 Although Latgalian was not spoken fully throughout the schools in Latgale, there were a few schools that offered classes on Latgalian.  Around 2007-2008, there were seven schools in Latgale that offered Latgalian as an optional subject (Kalsbeek, 15).  Although, Latgalian was offered as an optional subject, on average there were 150-200 students that studied it every year.  According to Kalsbeek, “teachers can write Latgalian classes into their curricula within the framework of the following subjects if it is accepted by the director or the educational council of the city or district” (Kalsbeek, 17).  This shows that there are still limits on where Latgalian can be spoken and/or displayed within Latvia.

Although there are limits on Latgalian being taught in schools, there are several different organizations and projects that are trying to help the growth of knowledge in preserving Latgalian.  In 1993, Rezeknes University College was established and aimed to be a research centre of Latgalian issues.  In 2000 Association of Teachers of Latgalian Language, Literature, and Cultural History was established for methodological issues and general information on Latgalian.  They also organize summer camps for teachers (Kalsbeek, 19).  In 2004, the Students’ Centre of Latgale was restarted and aimed to develop and coordinate Latgalian cultural, economic, and social activities (Kalsbeek, 19).  According to Kalsbeek, “largest projects include a summer school for students of secondary school, a festival of Latgalian music, a monthly evening folklore and Latgalian traditions, and the Latgalian
cultural newspaper” (Kalsbeek, 19).  This also shows how the people are trying to Latgalian become public again.  In March 2008, the Council of Latgalian Organizations was created.  According to Kalsbeek, “representing today more than 20 cultural institutions…It aims at shaping the development of Latgalian cultural and educational policies” (Kalsbeek, 19).  These organizations and projects are all examples of how they are trying to help Latgalian to become publicly known and respected again, especially in Latgale.

Overall, this video above shows the traditions and beliefs of Latgalians’. It also describes the different city’s in Latvia and talks about the different values and/or beliefs that each of these city’s have. The city’s are also closely related to Latgalians. Even though Latgalian was banned in the past, today you can see their culture and beliefs in certain city’s today. Therefore, by being able to see their traditions, people will be able to help the growth of this endangered language and/or help pass on the knowledge that they have to others too.