Li chiah pa bue? (Greetings in Taiwanese, literal translation: Have you eaten yet?)


Hokkien is a dialect originating from the Fu-Jian Province in China. Distinctly different from Mandarin Chinese, it spread to Taiwan in the late Ming Dynasty following development of the QuanZhou area and ports. Many emigrants were original speakers of the language and it flourished on the Island Formosa among the new inhabitants as well as the aboriginal natives of Taiwan. 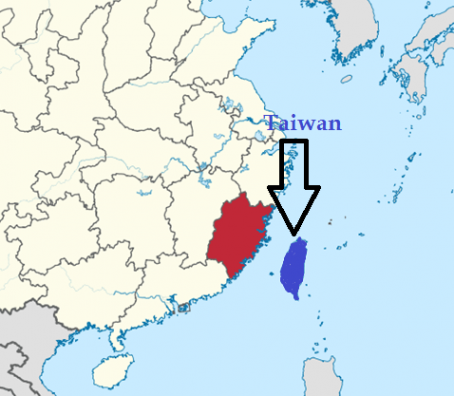 Fujian Province and Taiwan
Following this, with much migration of Chinese settlers from the Fu-Jian area that spoke Hokkien, it has become a prevalent language in many countries today such as Burma, Indonesia, the Philippines, Singapore and Malaysia. Each different environment has molded the Hokkien dialect distinctively but the structure and pronunciation has been retained and so Hokkien speakers may comprehend and converse with slight misunderstanding across Asia.

Taiwanese Hokkien began as the prestige language, established by settlers from Fu-Jian, China. As it developed away from its homeland and integrated with aboriginal language and customs, The island of Taiwan saw colonization by Spain and Holland, the effects of which can be seen today in the loanwords still present in the vocabulary.

Dutch : Pan (Bread)
Japanese : piān-só͘ (便所) for “toilet”,
ka-suh (ガス) for “gas”,
o͘-tó͘-bái (オートバイ “autobike”) for motorcycle
As Taiwan was reclaimed following World War II from Japan, it developed to an Independent state in the late 20th century after Chiang Kai-Shek lost to the communists on the Mainland and fled to Taiwan with the nationalist party and a great bulk of the China’s wealth and cultural heritage. What is most notable is that although some consider this a form of arson, in retrospect with the cultural revolution, much of what was taken from China has been saved in the reliquaries and museums present today that would have been destroyed if not moved. As The nationalists migrated to Taiwan en masse, there was an establishment of government that banned Taiwanese from being spoken or learnt. This period was perhaps the most challenging for Taiwanese as strong pressure against its continuation harshly impinged on its survival.
However due to efforts by the people to keep it alive, it survived till the 1990s where the ban was lifted and recently mother-tongue movements have allowed it to flourish among the general populace of Taiwan. Many native Taiwanese today recognize Taiwanese Hokkien as the official native language of Taiwan and it is bound strongly with identity. Mandarain although chiefly spoken by the majority of persons, is not as widely accepted as the national language of Taiwan regardless that is has more speakers than Taiwanese Hokkien speakers in Taiwan.

Recent globalization has popularized western hip-hop to an extent that Hokkien rappers have become celebrated musicians in our modern day culture. However, more recently and significantly there has been more proliferation of Mandarin singers especially with the influence of China’s massive cultural and economic boom. Some Taiwanese singers are well known and established as Mandarin artists. With the post industrialization period Taiwan exists in, many modern day businessmen and their families do not raise their children with a Hokkien background and therefore many are unable to speak their “native tongue”. This has become more prevalent in the recent past, and although there are many speakers as well as the mother tongue movement, as Hokkien does not have an official script and therefore is chiefly an oral language, it suffers many drawbacks in its growth and development among the people. 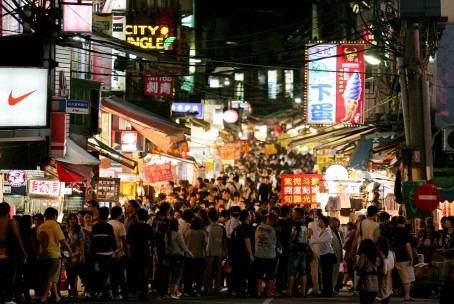 Visitors fill the street of a night market in Taipei, Taiwan, on Saturday, May 8, 2010. About 54 million Chinese may travel abroad this year, and a stronger yuan may boost their spending in Taiwan as the government in Beijing allows more citizens to visit the island. Photographer: Maurice Tsai/Bloomberg

Taiwanese can be understood as the language of the streets, and in some cases, the language of talk amongst Taiwanese businessmen. In the cases where business needs to be conducted between persons of Taiwanese origin, their seat at the table is maintained only with their command of the language. Much of Taiwan’s street life is where all the social life and culture is embedded, with a very secure and safe environment, persons walk the streets until late at night and therefore the infamous Taiwanese night markets are frequented by all. Command of Taiwanese in these scenarios is key towards getting around, and although Mandarin will enable you to get around fine, to be fully accepted and immersed in the culture, Taiwanese is a necessity. Bargaining of goods is chiefly done in Taiwanese, and since so much is for sale. this is a life skill that both makes life easier as well as builds relationships.

What is important to note, especially highlighted in the site below is the difficulties that Taiwanese Hokkien faces now. This is manifest in the economic drive and exterior pressures to learn more Mandarin as it is applicable in medical papers being published, business journals, newspapers and generally most information and media is given in Mandarin. The pressure exerted by China culturally also affects the status of Taiwanese Hokkien. This is because, although it is lacking in scholarship and primary resources of information, it may flourish in cultural scenarios. A period in the late Ming dynasty that saw a boom in acting and singing in Hokkien greatly boosted that languages distribution and spread in Fu-Jian and places Chinese traded with. If Hokkien is then shadowed by heavily Mandarin dominated media and culture, it will have few outlets towards proliferation in the Taiwanese culture. Like a species, languages are constantly evolving to cope with changing environments, and in this case Mandarin has a distinct advantage in the environment. My opinion is that backing of local artists and embracing of Hokkien literature, oral or otherwise is key to its survival and development as a Taiwan’s mother tongue.

Information on the mother tongue movement in Taiwan

On the whole, Taiwanese are very hospitable! Although at times jokingly stereotypical  they are very welcoming to foreigners and love the business they bring. Taiwan has strong ties with many countries although not fully recognized by all, it maintains a good relationship with the world and the people are very accepting of all new aspects of life, withholding drugs and criminal activities 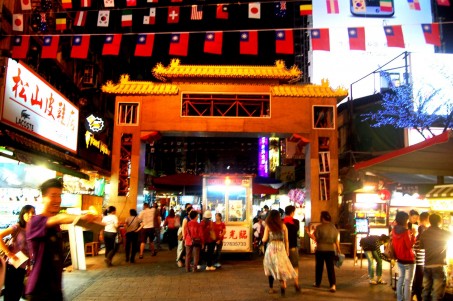 Want to Know More about my Language?

The food is to die for, vegetarian, pescetarian or carnivore, the options are endless. Taiwan is renowned for its salivary inducing dishes.

Taipei 101, former tallest building in the world prior to construction of Burj Khalifa in the UAE. But let's be honest, tall buildings don't belong in the desert.

We also have scenery! with 70% of the country being mountainous, there is much environment to frolic in .

Train in the Alishan mountains.

•The government of the Republic of China was founded on the Constitution of the ROC and its Three Principles of the People, which states that the ROC “shall be a democratic republic of the people, to be governed by the people and for the people.”

•Apart from Han-Chinese descent peoples, there are native aboriginals that are related to the Pacific islanders and their language is Austronesian by origin.