The Inughuit civilization is the northern most settled population in the world.  They live in northwest Greenland.  The Inughuit civilization is part of the Inuit community.  It is one of the last Inuit groups to retain it’s old ways of hunting-gathering living and have continued to speak it’s language, Inuktun.  Today their culture and community are threatened by global warming and the Greenland government.

There are 800 Inughuits or commonly known as Polar Eskimos, spread throughout four settlements in the Thule region in Greenland. 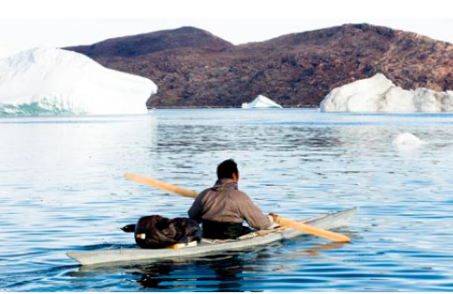 Men spend weeks away from home to hunt seals, whales, narwhal, walruses, other sea mammals, and animals on land like polar bears and arctic foxes.  They use dog-sleds to travel and bring tents but in extreme conditions they build igloos.  Their main civilization is given one shipment of fruit and vegetables a year by the Greenland government.

The Inughuit language, Inuktun, has a dialect very close to it’s ancient language. Inuktun consists of signs and groans (Leonard).  Words can be 50 words long.  They classify 18 different types of wind, and 20 different types of ice (Leonard).  Their knowledge of culture is kept in stories, narratives, drum dances, myths and folklores.  In 2010 there were 770 speakers of Inuktun (Leonard). The study of Inuktun has not gone beyond wordlists.  If their language is lost, their knowledge of how they are able to live in this rare condition of ice, land, and sea will also be lost. 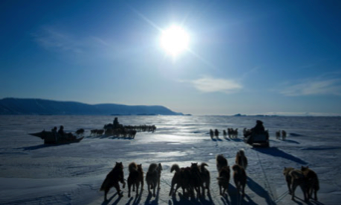 The main threat to the Inughuit culture and Inuktun language is climate change.  The melting ice has made hunting and gathering resources more scarce and difficult to find.  Their hunting season has been cut in half, ice doesn’t form as early, and melts sooner.  The movement of animals has become less predictable (Leonard). The number of seals has gone down.  The ice will become so thin they will no longer be able to use dog-sleds, their main transportation.

Another pressure on the Inughuit people is Greenland’s government. They can not afford to support such remote communities.  As the Inughuit’s resources decrease, they will have to start moving south, where it will be more easy to get resources.  Severe hunting quotas have also been made and the cost of sea mammals has increased.  It is guessed the Inughuit people will have to move south within the next 10 to 15 years.

What’s being done to help:

Dr. Stephen Pax Leopard, a British anthropologist and linguist, spent 2010 living with the Inughuit people and recording their culture and language.  He recorded, archived, and digitized their stories, narratives, and myths, so he can return them back to their community so future generations can use it to understand their culture better.

What to know more about my language?

The Polar North: language, place and belonging by Dr. Stephen Pax Leonard coming out in 2013.

Polar Eskimo: an ethnolinguistic introduction by Dr. Stephen Pax Leonard coming out in 2014.

Read more about other endangered languages!