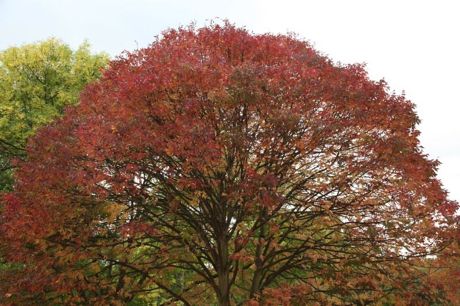 White ash (Fraxinus americana), also called Biltmore ash or Biltmore white ash, is the most common and useful native ash but is never a dominant species in the forest. It grows best on rich, moist, well-drained soils to medium size. Because white ash wood is tough, strong, and highly resistant to shock, it is particularly sought for handles, oars, and baseball bats.

The White ash is resistant to heat, although it is native to moist locations, including river bottoms and well-drained upland sites. It grows 50 to 80 feet tall and wide. The trees produce a good seed-set every two to three years and they germinate in the landscape creating a nuisance and perhaps look a bit messy. The seeds are used by many birds and can be produced in countless numbers. The tree grows rapidly and is almost pyramidal when young, but gradually slows down and develops a more spreading round or oval shape. White Ash prefers a sunny exposure where it develops a showy yellow fall color. Fall color can be striking or dull, depending on the tree and environmental conditions.

Leaf: Leaflets are often ovate (egg-shaped). The leaves are whitish (glucose) beneath. This tree contains opposite pinnately compounded leaves.

Flower | Seeds: Flowers appear in early spring. These are male flowers. White Ash is dioecious which means the male and female flowers are on different trees. The samaras (fruits) have long, narrow wings. Buds are rich brown with an interesting scaly texture.

Twig: Stout, gray-olive-green, hairless, leaf scars round at the bottom, notched at the top, with lateral buds in the notch; terminal bud is large, brown, with leathery scales and flanked by two lateral buds. 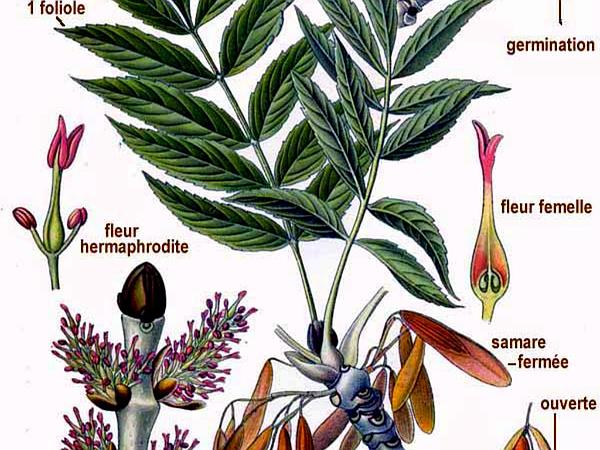 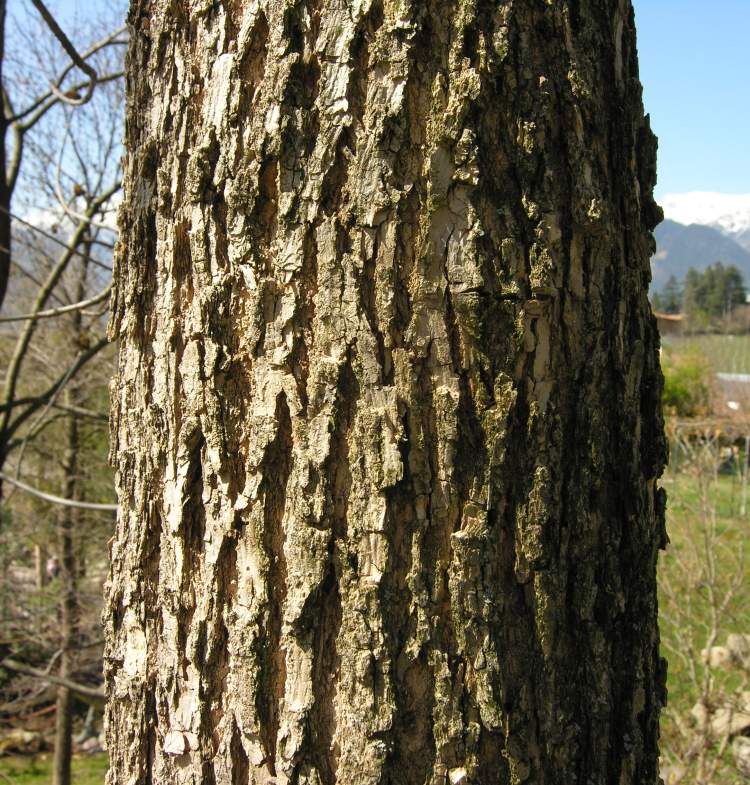 Form: A large tree up to 80 feet tall that typically develops a straight, clear bole (particularly on good sites), usually with a narrow oblong crown.

Life span: Perennial - a plant that lasts for more than two growing seasons.

Native Range: White ash grows naturally from Cape Breton Island, Nova Scotia, to northern Florida in the east, and to eastern Minnesota south to eastern Texas at the western edge of its range. Elevation: White ash grows from near sea level on the Coastal Plain to
3,450 feet (1,050 m) in the Cumberland Mountains.

Soil: White ash has a strong affinity for soils high in nitrogen and
calcium.

The damage to the ash population will be economically and ecologically  devastating. It has the potential to wipe out the whole species, which could  seriously affect ecosystems. In addition, the ash tree is an important economic  factor not only by the popularity in the purchase of the tree for ornamental  planting but for the products made and sold from its wood. In addition, the cost  of removing dead or dying trees is overwhelming municipal budgets. Homeowners  must also pay to either prevent the disease or to eliminate diseased trees from  their properties. Non-human: White ash is an important source of browse and cover for livestock and wildlife. The samaras are good forage for the wood duck, northern bobwhite, purple finch, pine grosbeak, fox squirrel, and mice, and many other birds and small mammals. White ash is browsed mostly in the summer by white-tailed deer and cattle.

White ash’s ability to readily form trunk cavities if the top is broken
and its large d.b.h. (24 to 48 inches [61-122 cm]) at maturity make it
highly valuable for primary cavity nesters such as red-headed,
red-bellied, and pileated woodpeckers. Once the primary nest excavators
have opened up the bole of the tree, it is excellent habitat for
secondary nesters such as wood ducks, owls, nuthatches, and gray
squirrels.

Pests: Borers are common on Ash and they can kill trees.  The most common borers infesting Ash are Ash borer, lilac borer and carpenterworm.  Ash borer bores into the trunk at or near the soil line causing tree dieback.  Lilac borer causes swellings on the trunk and limbs where the insect enters the tree.  The carpenterworm larvae bore into the heartwood but come to the outside of the tree to push out frass and sawdust.  Heavily infested trees can be severely weakened.  Keep trees as healthy as possible by fertilizing regularly and watering during dry weather.

Aphids are often seen but are usually not serious.

In late summer, fall webworm covers branches with webbing.  The nests in branches close to the ground can be pruned out when first noticed.   Bacillus thuringiensis may control fall webworm.

A number of fungi cause leaf spots on Ash. The disease is worse in wet years and is partially controlled by gathering and disposing of diseased, fallen leaves.

Anthracnose is also called leaf scorch and leaf spot.  Infected parts of the leaves turn brown, especially along the margins. Infected leaves fall prematurely. Rake up and destroy infected leaves. Chemical controls are not practical or economical on most large trees.

Canker diseases cause branch dieback and death of the tree when the trunk is infected.  Try to keep trees healthy with regular fertilization.

Powdery mildew makes a white coating on the leaves.

Ash ring spot virus causes chlorotic red and yellowish spots or rings on the leaves. Infected trees may be stunted and dieback, but often the problem in minor. 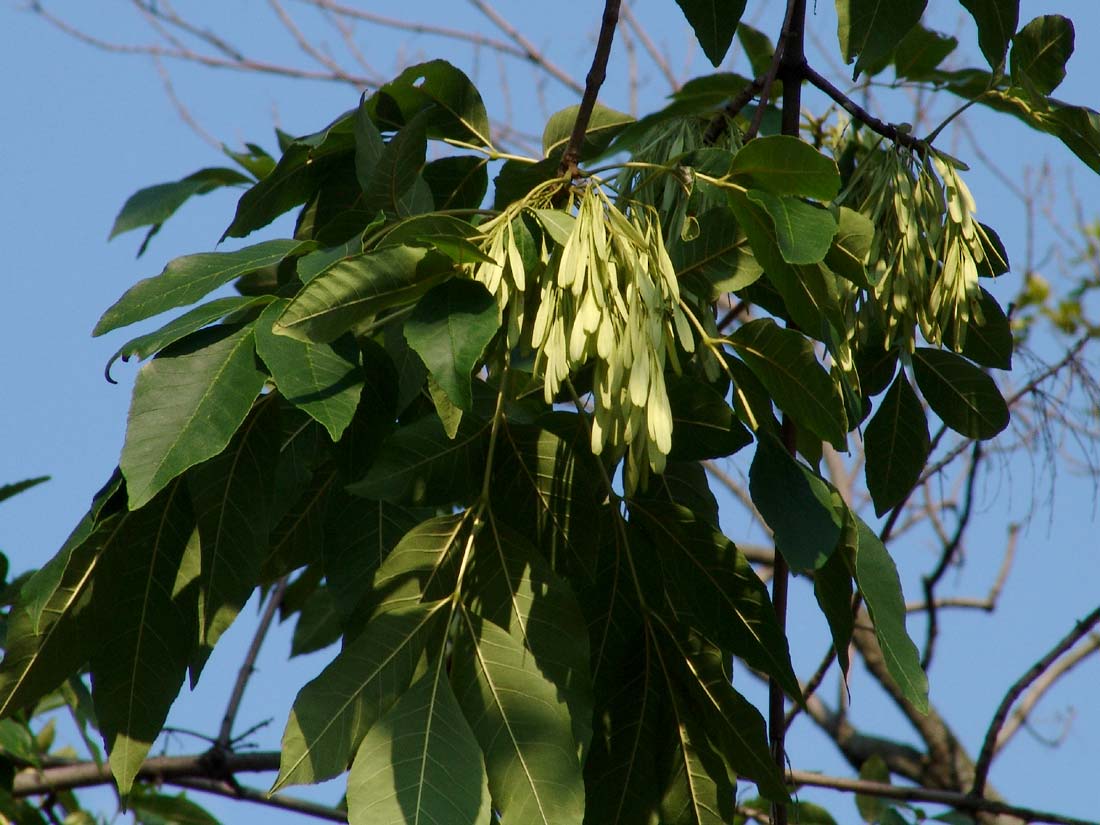 - White ash is also known a “poor man’s oak”. It is valued for its wood, which is strong, straight-grained, and fairly light-weight. Juice made from the leaves gives topical relief to mosquito bite swelling and itching.

- The White ash has also been used to make hockey sticks. 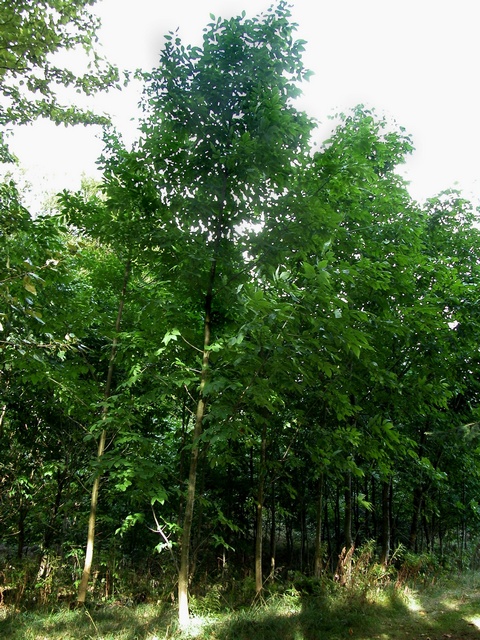