The Ranunculaceae family includes the species Ranunculus septentrionalis (otherwise known as the swamp buttercup).  This perennial plant is native to Illinois and grows throughout the state and most of the upper Midwest in the United States.  The Swamp buttercup is about 6 inches tall.  Its dark green basal leaves are alternate and pinnately divided into usually three leaflets that are approximately three inches long and approximately three inches wide.  Its stems can be either light green, brownish green or reddish green in color and glabrous to slightly pubescent. They usually creep along the ground for up to 2.5 feet.   It produces one to several yellow buttercup shaped flowers (and hence its name) from about April–June that last about 1.5 months.  The flower has 5 yellow petals, 5 light green sepals, many yellow stamens and a cluster of pistils in the center of the flower and is about 1.5 inches in diameter.

Swamp buttercup grows in areas that are very moist (hence the first part of the name: swamp).  Therefore, this species of buttercup likes to live in soggy areas such as ditches, bogs, ponds and along rivers and lakes.  These areas are too wet for many other plants, including invasive species (like garlic mustard).  Thus, the swamp buttercup population is alive and well.  They reproduce both by seed and vegetatively (by sprawling and forming new roots as it goes).  This is an extremely variable species and is easily and often confused with other species and sub-species of buttercup.  In fact, some authorities consider it to be a sub-species of Ranunculus hispidus. 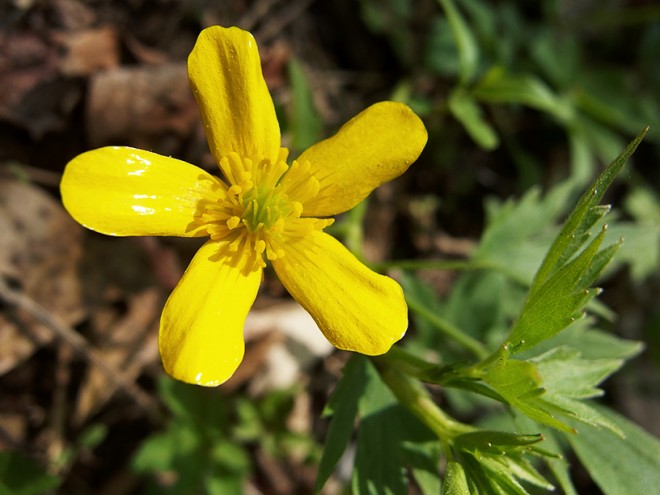 Leaf: The basal leaves are alternate and pinnately divided into usually three leaflets that are approximately three inches long and approximately three inches wide.  These leaflets in turn are then
stalked, usually toothed and usually divided again.  The middle leave is longer than the two lateral leaves and also has a longer petiolule (stalk) at its base.

Flower | Seeds: One to several flowers are occasionally produced from about April-June from an unbranched stalk about 4-6 inches long. They blossom can last about 1.5 months. The flower has 5 yellow petals, 5 light green sepals, many yellow stamens and a cluster of pistils in the center of the flower.  The diameter of the flower is about 1.5 inches.  The yellow petals are waxy, not connected to each other and are about 2/3 inch long.  The base of each petal has 5 fine lines that serve as nectar guides.  The light green sepals are smooth or hairy, also not connected to each other and pointing
downward and about ½ inch long (shorter than the petals).  The numerous pistils are also free from each other and are smooth.  Once the petals of the flower fall away, each of the numerous pistils transforms into a flattened achene (basically a dry fruit surrounding a single seed).  This achene is approximately 3.5mm long.

Stems: The stems can be either light green, brownish green or reddish green in color and glabrous to slightly pubescent. They usually trail and creep along the ground (although they can ascend up objects) and can grow up to 2.5 feet long.  They are hollow and usually smooth, but sometimes slightly hairy.

Roots: The root system consists of tufts of fibrous roots.  The roots can grow in water and very moist soil.  They can be split to transplant new plants.

Life span: The swamp buttercup is a perennial plant.  It can reproduce by seed or vegetatively.

Care:  These plants are very durable and really need no special care before winter.  Just trim any brown or dying stems.

The swamp buttercup is common throughout most of North America including Illinois.  They growth in areas where the soil usually remains very moist such as ditches, low spots in pastures and meadows, bogs, the borders of ponds, lakes and rivers and generally any other area where the soil remains very moist and there is partial sunlight and shade (they generally will not thrive in full sunlight or full shade). They prefer soil that is fertile and loamy.

Within the same family, the creeping buttercup (Ranunculus repens L.) is one of the most invasive species in North America.  The creeping buttercup is native to Europe. But now has naturalized to temperate regions of North America, South America, Asia, Africa and even New Zealand and Alaska.  It lives in pastures, croplands, woodlands and other grassy areas including invading yards and gardens.  They cause damage by choking out the desired native plants and agricultural products.

The swamp buttercup can be affected by drought (lack of adequate water levels and amounts) and soil erosion along the rivers and ponds where it mainly grows.

Non-human: The stems and leaves of the swamp buttercup are basically toxic to herbivore mammals and thus for the most part are not eaten by most of them (the wild turkey is one exception).  The toxic substance is protoanemonin.  The Achene (dry fruit/seed) is eaten to a limited extent by such animals as the wild turkey, cottontail rabbit, fox and gray squirrels, eastern chipmunk and meadow vole.  The flowers do attract various insects such as bees and beetles (little carpenter, mason, halictid and andrenid) and flies (syrphid, bee flies, anthomyiid and other) among others.  These insects feed on the nectar and the bees also feed on and collect the pollen.  The bees thus help in pollination. The buttercup sap that is an irritant to humans is also an irritant to most common livestock animals including cows, sheep, horses and pigs.  Cows are very susceptible to buttercup poisoning while grazing.  At a minimum, the cows are irritated and will give less milk.  Worst case, buttercup poisoning can cause colic and respiratory distress and convulsion.

Humans: The same substance (protoanemonin) that is toxic to most herbivore mammals is also toxic to humans as well.  The sap from the buttercup can irritate mucous membranes and the skin in humans.  Thus, anyone handling this plant should take precautions to avoid contact with the skin and accidental ingestion and inhalation. 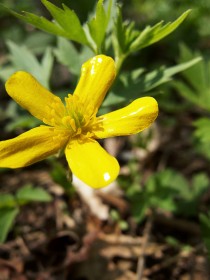