Spreading Jacob’s ladder, Polemonium reptans is in the Polemoniaceae family and is a native perennial plant that is found in the Midwest and eastern United States.  It is found in deciduous woodlands, mesic black soil prairies, and areas along rivers that are semi-shaded.  It flowers from April through June.  Generally the flowers are blue but can also be lavender, pink, purple or white.  It gets its common name from the pairs of opposite leaflets on the compound leaves which resemble a series of steps on a ladder in a dream by the Biblical Jacob. 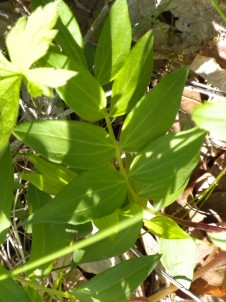 Leaf:The leaves are alternate, compound and are odd pinnate, consisting of about 5–15 leaflets, and they are up to 1’long. The leaves have white hairs at the base of the petioles of the compound leaves. Each leaflet is ranges from oval shape to ovate shaped.

Flower | Seeds:The flowers are bell-shaped and are about 2/3’ across.  Each flower has 5 rounded petals with 5 stamens and white anthers. The flowers can be blue, lavender, pink, purple or white.  The seeds are inside rounded capusles and the flower is spread by reseeding itself.

Life span: They are herbaceous perennial plants which means they grow every two years.

Inflorescence: The inflorescence of the Polemonium reptans are made up of bracteate panicles which are very dissected leaves.

They bloom from mid spring to early summer from May- July for 2-3 weeks and are found growing in deciduous mesic woodlands, prairies, and along rivers of the Midwest and eastern United States.

Polemonium reptans is important to the ecosystem because its flowers nectar and pollen attracts butterflies as well as many insects. They use the nectar as food and help the plant spread it’s pollen so the plant can produce offspring.

Non-human:  There are many types of bees that pollinate the flowers of Polemonium reptans.  They include honeybees, bumblebees, little carpenter bees, mason bees, cuckoo bees, halictid bees, and Andrenid bees.  Other insects that visit the flowers include the giant bee Fly, various betterflies, skippers, Syrphid flies and moths.

Humans: Humans can plant these flowers in their garden. These plants like part shade to full shade in average to moist soils with organic matter. When planting these plants use them in woodland gardens, wild flower beds either planting them individually or in mass plantings.

Pests: No serious pests or diseases 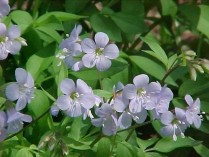 Subjects of this page: 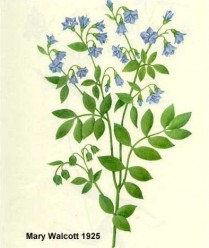