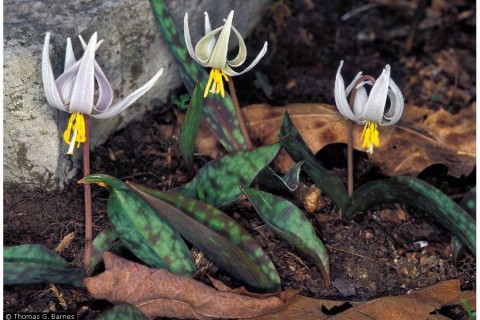 The White Trout Lily grows in large colonies that can cover a large amount of a forest floor in the early period of Spring. Most of the plants have a single leaf, however when mature they gain a second basal leaf with a flower growing from the top of a long stem. The blooming of the flower is charming; it blooms in a shy nodding position encouraging one to appreciate the beauty inside by tipping it back slightly.

Origin: Forests of Eastern Canada and the United States

Leaf: The flower contains a single leaf when young and many times grows a second leaf upon maturing and the blooming period. The leaves are basal and can grow to be six inches long and two inches wide. They are simple leaves that arise opposite from the stalk, oblong shaped and have a tapered point. The soft pale green color with brownish spots give each glaberous leaf its own characteristic, so that no leaf is alike to one another like a snowflake.

Flower: Once the plant begins to mature, it grows a stalk about four to six inches tall. From the stalk blooms a white six petaled flower with bright yellow anthers. It blooms to be an inch wide and the petals curve backward with the stamens extracted nodding downwards. The stamens are a bright yellow color; the inside of the flower’s petals are white, and the back of the petals are a mix of soft gray, brown, pink, and blue colors.

Life Span: It is a perennial herbaceous, spring ephemeral. They appear in the early Spring, bloom from mid March to mid April. 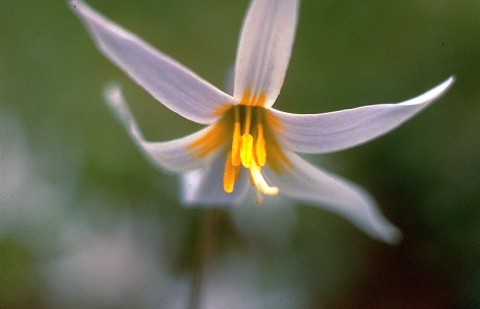 White Trout Lily is commonly found in many counties of Illinois in moist to mesic woodlands, they’re also found in Canada and in some woods of Europe and Asia. They also have a habitat in the gentle slopes of the wooded areas where some sunlight can be let in. They are adapted to growing in deciduous hardwood forests where they can receive an ample amount of sun in the early spring.

Climate: They prefer to grow in rich loamy soil with decaying leaf mould. Sunlight is needed in order for them to bloom during the early spring, however they are able to tolerate partial shade. Since the flowers grow in large colonies that take up a lot of ground in woods, they can not be bothered. The moving or change of their ecosystem causes the flowers to vanish back into the Earth’s ground for seasons. 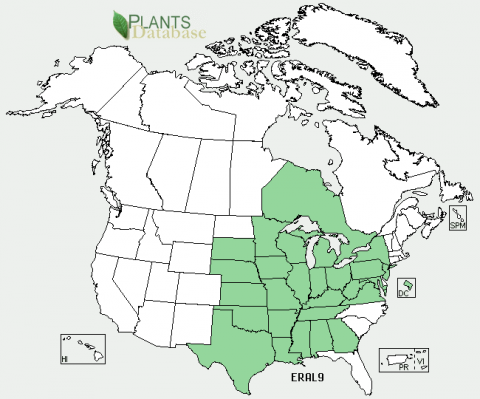 Importance to the Ecosystem

They are considered to be important to the woodland community because of its large colonies serve as a stabilizer for the forest floor. They contribute important nutrients to the soil since they reproduce mainly by corns versus seeds. Maintaining stabilization in their habitats is key because if they lose their habitat then that causes endangerment of the species.

Relationship with other Species

Non-Human | Pests: The flower serves as a benefit to the ﻿wildlife like the deer as a source of food. They enjoy consuming the basal leaves and it is obviously not deer resistant. It is also an important plant for the Queen Bees who need their pollen for food in the early spring.

Humans: ﻿It is considered to be edible and medicinal for the humans. The leaves, flower, and corns of the plant are edible however too much consumption will cause the human to become sick and throw up.