Dodecatheon meadia is a herbaceous perennial, native to eastern and central United States. The petals and cluster of yellow stamens converging to a point give the flower the appearance of a shooting star plummeting to earth.

Dodecatheon is Greek for “flower of the 12 gods.” This most likely refers to the belief that primroses (family Primulaceae) were under the care of the twelve superior gods of Olympus. The shooting star was named “Dodecatheon” by Linnaeus, perhaps because of the unusual form, elegance, and color of the flower.

Leaf | Stalk: The leaves are basal, smooth, on long stalks, and up to 8″ long and 3″ wide. The smooth flower stalk grows up to 2′ tall. At the top of the stalk is a whorl of small bracts, in which a spray of individually stalked flowers arise. 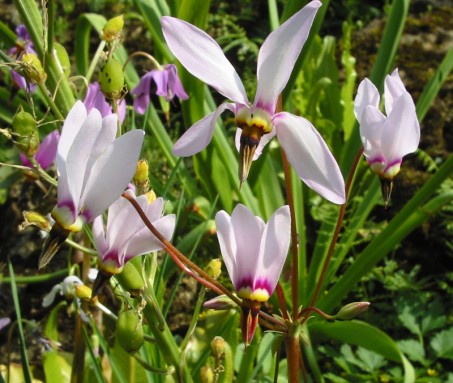 Flower | Seeds: The flowers have a unique shape - five stiffly recurved petals bend straight back from a protruding pistil. Five prominent stamens project from the center which are usually dark brown bases. These make a yellow beak; small red-brown dots are marked on the petals where they meet the stamens. Sometimes the flowers are pink or lavender rose; at other times they are white (as you will notice throughout this page). The small dark seeds are contained in seed capsules that are held erect.

Pollinators: Queen bumblebees are the most typical visitors of the oddly shaped flowers.

This shooting star will grow well out in the open prairie, between railroad tracks and highways. In wooded hills, they tend to be more delicate and thin, with paler pink flowers than the prairie plants. The plant is also common in moist to dry prairies, savannahs, and rocky-hill prairies. The Dodecatheon Meadia is native to North America. It is found in the American South, as well as the Upper Midwest, Kansas, New York, Pennsylvania and the Canadian province of Manitoba. 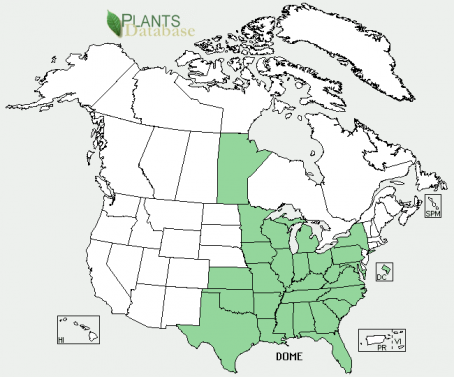 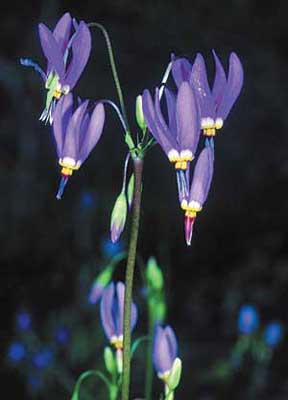 Through various research it has been determined by the writers of this page, that the plant contributes no other significant factors to the ecosystem besides a few key details due to it’s rarity. It does contribute to the biodiversity of the ecosystem it’s in which is key to a wild ecosystem’s survival. It is a key part of the prairie ecosystem. It is also a main source of pollination and food for the queen bumblebee.

Non-human: There are various similarities in the flowers when compared to Cyclamen, another member of the Primulaceae family. The Shooting Star is also related to the Dodecatheon jeffreyii and Dodecatheon pulchellum.

Humans: There are no known medicinal uses for the plant. Although history states that the Native American may have used the plant to help aid women though pregnancy this has not been confirmed. As for relationships the plant is simply pleasant to look at and was worshipped by the greeks as a flower that was cared for by the gods. 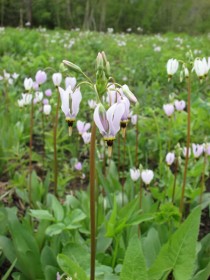