In the fertile woodlands of Illinois, Wild Ginger is in full bloom from April to June. This beautiful flower can often go unseen underneath the moist wooded floor with a blanket of velvet kidney-shaped leaves. However underneath an array of these leaves, one will find a flower of the moist delicate nature. This plant is found in the Aristolochiaceae family and all the parts of this plant have a delicate ginger taste. 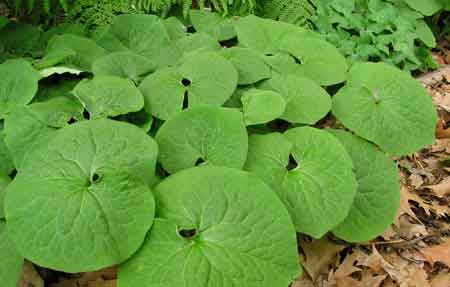 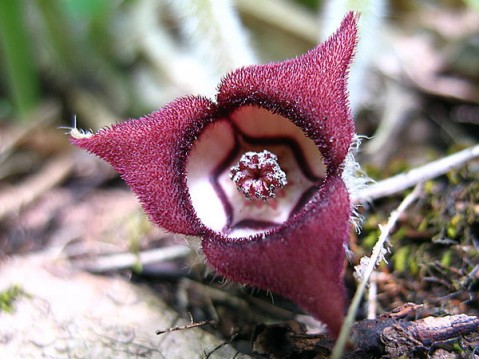 Leaf: Wild Ginger has kidney shaped leaves that closely covers the forest floor where it is abundant. This plant grows on average 6” to 12” tall with branches at ground level that have two basal leaves, which are about 3” long and 4” wide. The leaf can be distinguished by its orbicular shaped with smooth margins and a deep notch at the base.

Flower | Seeds: Unlike most plants, the leaves of Wild Ginger completely cover its beautiful flower. Underneath the dark green leaves are small flowers that are dark red or purple-brown on a short stem. The flower is in full bloom from April to June. Ants disperse seeds by carrying off the edible seed appendages of the flower.

“As a rule, the one thing that a plant flaunts before all the world is a flower, but Wild Ginger reverses this, hides its blossom and instead of seeking sunlight puts it in the shade, almost in the dark”﻿ (Adelman, 2011).

Shape: Wild Ginger is found as a ground cover with kidney-shaped leaves.

Stem: The stem is pubescent. Wild Ginger is a native plant to the Chicago region and many others. It comes from the Aristolochiaceae family. The Aristolochiaceae family around 460 different species and 7 genera around the world, of which three are in North America (Aristolochia, Asarum and Hexastylis). Asarum canadense is commonly found in floodplain woods but also can be found along ravines and slopes. This species is native to most areas in Illinois but also to most states east of North Dakota and in Eastern Canada.

The members of this family are low-growing dicot plants, meaning the plant contains an angiosperm with two seed leaves. Other characteristics of this family include that the flowers are either regular or irregular with 12 stamens, 0 petals, and an inferior ovary.

Wild Ginger is a key component to woodland habitats because once it is established, it is a hardy plant which discourages non-native species from being able to take over the habitat. However, non-native species like European Buckthorn can take over a habitat, thus destroying the forest canopy which causes many understory species like Wild Ginger to recieve no sunlight.

Flies and beetles are attracted to the dark red flowers of the Wild Ginger, acting as their key pollinating agents. Ants are attracted to the appendages and they help with seed dispersal. Ants enjoy the elaiosomes on the seed but leaves the seeds to germinate and spread the species underground.

Predators: Many species in the Artisolochiaceae are toxic to mammalian herbivores, thus protecting this plant from most predators.

Humans: Wild Ginger has been used in oriental cooking as a spice or a digestive stimulant to relieve stomach aches. Native American woman also made tea of the root for a contraceptive. Also, the plant contains potent volatile oils that are used in oil medicine. This plant was also used to treat wounds and it was found later that it has two antibiotic compounds.

﻿Disease: ﻿This plant has little to no diseases. Slugs and snails can sometimes cause problems but rarely.

Plants of the Chicago Region by Floyd Swink & Gerould Wilhelm, 1994 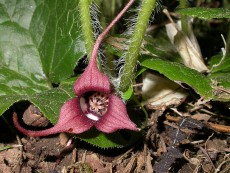