The silver maple, Acer saccharinum, is in the Aceraceae family. It gets its name from the silvery sparkle of the underside of the leaf when it blows in the wind.  It likes to grow in moist places and makes for a good shade tree.  Its wood is used for furniture and cabinets.  It makes for great river bank stabilizers because it’s fast-growing and has soft wood. It’s native and is common in the eastern and midwestern United States from north to south. 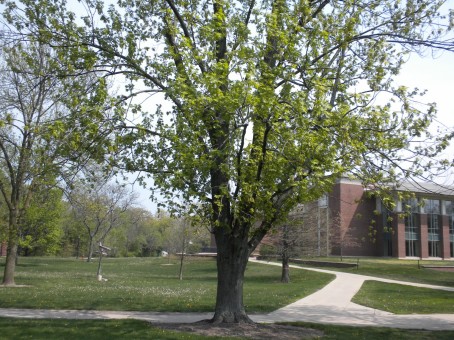 Leaf: The leaves are opposite and palmately lobed. Each leaf has five lobes which are long and sharply pointed.  The leaf sinuses are V-shaped.  On the top of the leaf it is green, but when you look at the underside of the leaf it gives off a silvery white color.

Flower | Seeds: The silver maple flowers very early in the spring before the leaves open.  The flowers start out as red buds, but then turn to a greenish yellowish color.  They grow in clusters.  The male and female flowers can grow separately on trees, but they can also grow on the same tree.

The fruits of the silver maple are called samaras.  They grow in pairs.  The paired wings are about 60–90 degrees apart.  The seed is about 1.25”–2”long.  The samaras are brown with pink veins. 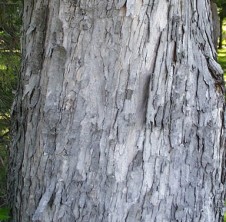 Trunk | Bark: The diameter of a silver maple’s trunk can reach between 3–5 feet.  The bark is smooth with a gray or silvery color, but as it becomes older it begins to be loose, scaly, and shaggy.

ID features: The stems, when broken, produce a strong odor. The flower buds in clusters look like Christmas ornaments. The buds look similar to those of Acer rubrum, but are slightly larger.  The tree has deeply cut foliage, silvery bark with orangish furrows, and “droop and swoop” branch tips.

The silver maple is one of the 125 species of the Aceraceae family that ranges from the northern temperate regions to the south tropical mountains.

In North America there are 13 native species.  The silver maple extends from Maine and New Brunswick in the east, through southern Quebec and Ontario, west to Minnesota and South Dakota.  It also extends south through Nebraska, Kansas and Oklahoma to Louisiana. 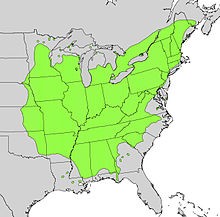 Silver maple is a native, deciduous, medium-sized tree.  The height ranges from 90 to 120 feet.  It is typical of wet bottomlands, riverbanks, and lake edges.  The silver maple grows best in moist well drained soil.  Some other plants that often grow with silver maple include: red maple, American elm, American sycamore, black willow, sweetgum, elderberry, poison-ivy, and milkweed among others.  The silver maple helps in hydraulic lift which redistributes soil water.  It draws water from lower soil layers and emits the water into upper drier soil layers.  This not only benefits the tree itself, but also many other plants growing around it.

Non-human: Wild turkey, bobwhite quail, finches, squirrels, eastern chipmunk, wood ducks eat the seeds of the silver maple. The white-tailed deer and the eastern cottontail eat the leaves and stems.  Beavers eat and chew on the bark and squirrels eat the buds.  Many different types of birds hang out (roost) in the silver maple tree.  They include red-winged blackbirds, grackles, European starlings, and Bbown-headed cowbirds.

The silver maple has such a high growth rate that humans are considering using it as a biofuel. With its rapid growth, form, and the ability to adapt to a variety of ranges humans have planted silver maple in urban areas like parks, roadsides, and gardens.  Humans have taken advantage of how quickly it grows to good heights and it has become a popular shade tree.

Anthracnose leaf spot: Symptoms include light brown, purple, or black spots that vary in size and shape. Spots can develop anywhere on the leaf surface.

Phyllosticta leaf spot: tan or brown spots.  Diseased centers can leave holes in leaf.  After the holes appear the fungus can develop in the leaf spots.

Tar spot: Highly distinguished by raised black spots on the leaf surface.  The spots resemble a puddle of tar.

Maple gall mate (Vasates quadripedes) are cousins of spiders and make galls on maple leaves.  The galls are green then they turn red and finally they turn black.  There can be up to one gall on the leaf or the entire leaf can be covered.  The galls form when the adult feeds in the spring.  The mites chew on the leaf and as the mite is doing that the tissue of the leaf grows out forming the gall.  Once the newly borns are hatched the process repeats.

Maple petiole borer are small sawflies.  As adults they lay eggs in the petioles (stems) of maple leaves. They feed within the petioles for 20–30 days.  When they tunnel their way into the leaf petioles they disrupt the connective tissue, causing leaves to fall, often very suddenly.

George A. Petrides, A Field Guide to Eastern Trees,  p.70

A Photographic Guide to More than 500 Trees of North America and Europe by Roger Phillips pg. 46 and 75

Handbook of the trees of the Northern States and Canada East of the Rocky Mountains by Romeyn Beck Hough pg. 332-333 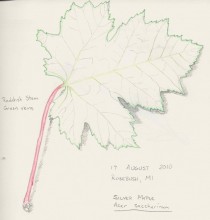 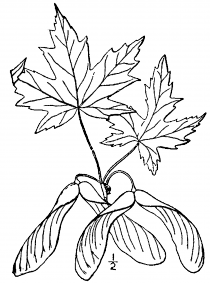