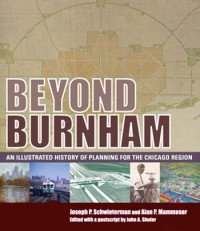 Buy the book from:

Beyond Burnham: An Illustrated History of Planning for the Chicago Region

Joseph P. Schwieterman and Alan P. Mammoser
Edited with a postscript by John A. Shuler

Beyond Burnham provides a fascinating account of a century of visionary planning for metropolitan Chicago. From Daniel Burnham and Edward Bennett’s famed 1909 Plan of Chicago to the push for superhighways and airports to battles over urban sprawl, the book showcases an illustrated portrait of the big personalities and the “big plans” they espoused.

The human face of planning appears in the interplay between public officials and citizen advocates. Powerful institutions—the Chicago Plan Commission and Regional Transportation Authority, among others—emerge to promote metropolitan goals. Some efforts succeed while others fail, but the work of planners lives on in efforts to shape new visions for the region’s future.

Joseph P. Schwieterman is professor in the School of Public Service and director of the Chaddick Institute for Metropolitan Development at DePaul University.

Alan P. Mammoser is a Chicago-based writer and regional planner who has written numerous articles on urban and environmental issues.

Distributed by the Northwestern University Press.