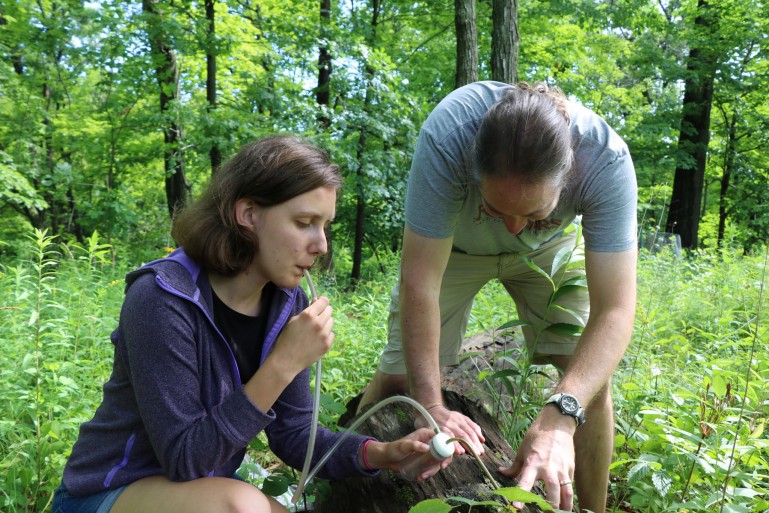 The Biology faculty pursue research questions that range from the molecular through organismal behavior to ecosystems and community. Faculty and student researchers collaborate closely in nationally funded labs to contribute to the process of discovery and advancement of knowledge.

I am a behavioral ecologist interested primarily in sexual selection. I study mating behavior employing insects as model species, both in the field and the laboratory. My current research is on katydids and moths, but I have also worked with flies, beetles and treehoppers.
I am fascinated by the degrees of elaboration and variation in animal mating traits, including courtship displays, mating songs, elaborate genitalia and nuptial gifts (items offered to a mate during courtship or copulation). In most species, males compete for mates, while females have mate preferences, choosing their mates based on certain male traits. Female preferences can therefore exert strong selective pressure on males, playing a major role in the elaboration and diversification of mating traits, and potentially generating population divergence and speciation. My research focuses on the evolution of traits used to attract mates, the costs and benefits of reproductive investments, and the mechanisms and functions of mating preferences.Students interested in joining my lab can contact me at barbosa@lakeforest.edu.
Professor Barbosa’s website

I am fascinated with how cells manipulate protein shapes. Proteins are the most diverse class of molecules in our cells and their unique functions and shapes hold the secrets of life. If proteins still misfold, they are targeted for destruction to preserve cellular health. But some misfolded proteins that such escape quality control, build up in tissues and cause tragic incurable diseases. I collaborate with undergraduates to investigate the protein folding mysteries underlying one such illness: Parkinson’s Disease, which is caused by the misfolding of protein, alpha-synuclein. My students are seeking to understand how alpha-synuclein misfolding and problems with its clearance causes cell death by using innovative experimental model systems: budding and fission yeasts. Students interested in joining my lab can contact me at debburman@lakeforest.edu.
DebBurman Lab website

I study behavioral ecology and the evolution of behavior, focusing on sexual behavior and mate choice. Currently, I am studying the effects of social and environmental factors on the sexual behavior of guppies. I am especially interested in how mate choice by females contributes to polymorphism in male color patterns. Our lab has demonstrated that female guppies are more attracted to males with unique color patterns than those with common color patterns.  We are now focusing on behavioral mechanisms for females’ apparent preferences for unique color morphs and on their general attraction to novel males. Students interested in joining my lab can contact me at houde@lakeforest.edu.
Professor Houde’s website

Our laboratory studies how telomeres, the chromosome termini, are kept intact.   We want to understand how the telomerase RNA, which supplies the template for the synthesis of telomeric DNA, functions in regulating telomere length.  The telomeres get shorter without this RNA, which is detrimental to all cells, and at a minimum, contributes to cellular aging.  Our research is conducted in model organisms that are quick to reproduce and easy to use, like the filamentous fungus Aspergillus, and thus are great for undergraduates.
Professor Kirk’s website

I study animal physiology (adaptations to maintain homeostasis), mainly focusing on membrane transport mechanisms and signal transduction processes at the cellular level.  Currently, I am investigating the physiological basis by which cells regulate their volume using vertebrate red blood cells as a model system.  Although the ability of cells to regulate their volume is one of the oldest regulatory mechanisms from an evolutionary standpoint, little is known about the processes that underlie this widespread phenomenon.  To elucidate this topic, students in my lab incorporate several complementary experimental approaches: hemolysis experiments to examine osmotic fragility, electronic sizing to determine cell volume, and fluorescence microscopy to monitor levels of intracellular calcium. Students interested in doing a research project or independent study can contact me at light@lakeforest.edu.
Professor Light’s website

My research integrates the study of ecology, behavior and evolution into the fields of biogeography, community ecology and invasion biology by using modeling and experimental techniques to link patterns of species occurrence with processes that determine species persistence, coexistence, and movement across spatial scales. My most recent research has focused on 1) The transition in life history traits of species between natural and urban environments 2) How urbanization and biological invasions effect geographic patterns of diversity and 3) How climate and habitat restoration influence community structure.
Students interested in doing a research project or independent study can contact me at menke@lakeforest.edu.
Professor Menke’s website

I am interested in how animals gather information about their environment through their sensory systems and how this information influences an animal’s behavior.  I combine the study of neuroethology (neural basis of behavior), animal physiology (internal functions of animals), and animal behavior to investigate how the detection of certain stimuli by a sensory system contributes to the animal’s overall behavior. My current research focuses on the lateral line system in fish. Fish use their lateral line systems to detect water flows generated by biotic (predators, prey, other fish) and abiotic (rocks, waves) sources. This information is used in several behaviors including predator avoidance, feeding, schooling, and communication. I study several components of the lateral line system, including its distribution on a fish’s body, its sensitivity and filtering capabilities, and its role in swimming, feeding, and schooling behaviors.  Students interested in joining my lab can contact me at schwalbe@lakeforest.edu.