Until the environmental justice movement rose to prominence over the past few decades and invited a more critical perspective on the connection between race and the environment, popular understanding of the American environmental (and environmentalist) tradition had effectively been whitewashed.  Why? This course will work to find answers to that question while unearthing the deeper roots of African American environmental culture in conversation with key moments in African American history – from slavery to sharecropping, from migration and urbanization to environmental justice.  With an interdisciplinary approach that considers sources as diverse as slave narratives, fiction, poetry, songs, photographs, maps, ethnographies, we will consider African American intellectuals, writers, visual and musical artists, and everyday citizens not always associated with environmental thought, from W.E.B. Du Bois and Zora Neale Hurston to the Black Panthers and the victims of Flint, Michigan’s, water crisis.

Each student presented in a group on one of these environments, where they were asked to discuss the space based on class readings and also think about how these areas impacted African Americans’ understanding and experience of the natural environment. 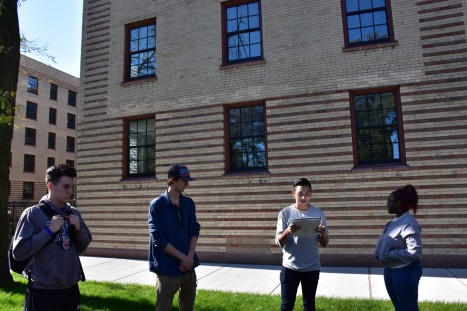 Above: Outside the newly re–opened Michigan Boulevard Garden Apartments (also known as the Rosenwald Apartments), which boasts a large courtyard with grass, trees, and flowers meant to counteract the densely–built and often rundown portions of the surrounding Black Belt. 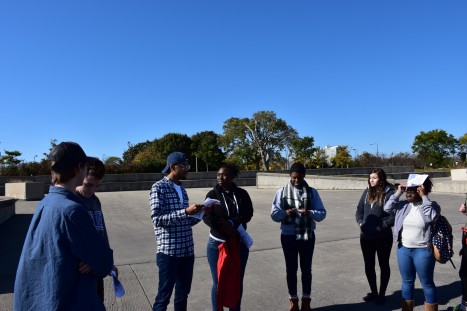 Above: At the site of the former Washington Park boathouse, where African Americans often faced violence from racist whites who wanted to prevent them from using the 371–acre Fredrick Law Olmsted and Calvert Vaux–designed city park.