My road to Ikigai

Although I live in the United States, my extended family resides in India. In Indian terms, I am very proudly an ethnic mutt of four distinct cultures that my four grandparents represent (Tripuri, Bengali, Oriya and Gujarati). My father’s family hails from the state of Tripura in Northeastern India (once an ancient Hindu kingdom). My mother’s family hails from the erstwhile province of Hindol (within the eastern state of Odisha). I was born in the capital city of Odisha, Bhubaneswar (also known as the city of temples).

Because my father worked for the Indian Railways, my culturally democratic childhood and schooling was spent over many towns and cities of eastern, central and northern India, including the memorable towns/cities of Adra (West Bengal), Khurda Road (Odisha),  Nagpur (Maharashtra), Guwahati (Assam), and New Delhi, India’s capitol. Since I came to the United States in 1987, I have lived in Springfield (Ohio), Evanston (Illinois), Chicago (Illinois), Kalamazoo (Michigan), Lake Forest (Illinois), and Lake Bluff (Illinois). Moving homes and schools and making new friendships was a routine part of my early life.

I pursued my K-12 education in India, but came to the U.S for my college education.  At the age of 18 after I graduated from high school from Delhi Public School (Mathura Road), I got accepted to top medical schools and engineering colleges in India. I did the obvious: pursue engineering at IIT Delhi. Almost immediately, I found engineering boring and realized I was ill-suited for it. Yet, I stuck with it for nearly two years because “quitting” seemed near-unacceptable. Eventually, I realized that I needed to pursue my true interests but I also needed more time to discover them. For the first time I allowed myself to consider that I had broad intellectual interests that resisted a narrowing of focus and this realization drew me to the liberal arts and to the U.S. I needed that freedom to find my passion, mission, vocation, and eventually profession. Therefore, I did the unthinkable: dropped out of IIT opting instead for an exciting risky unknown: undergraduate liberal arts.

In 1987, I became an undergraduate student at Wittenberg University, joining this insititiution because it offered me the most financial aid. I did not know much else to separate it from the other small colleges I was accepted at.  Despite such a practical decision, Witt turned out to be serendipitious for my future. My four years there were nothing short of transformative.  I grew up intellectually and personally in ways that helped me discover my fullest potential and uncover what motivated me most.  I satisfied my deepest urges to explore the humanities, social sciences, and the natural sciences and found unexpected connections between them that became life-long career beams. My interdisciplinary mindset was forged partly by my two majors in biology and economics and a minor in history, and partly by engaging in student and faculty friendships that spread the intellectual gamut. I thoroughly enjoyed taking classes as varied as “Emerson”, “War & Morality”, “Neon Art”, “Electron Microscopy” and “Economics of Natural Resources”. In all this, what I gained most were friendships with my peers and teachers that remain firm and strong even today. Among my mentors were key individuals: Dave Mason, Richard Scott, Chuck Dominick, Jim Huffman, Elizabeth Powelson, Dick Veler, Debbie Bhattacharya, Charles Chatfield, Jo Wilson, Dave Wishart, and Nathan Bolls.

This intense social and academic experience has navigated my professional path ever since and made me realize while in graduate school that I should become a liberal arts college professor one day. In particular, my junior year, I became fascinated by the mysteries of the human brain when I took a course in physiological psychology. It cemented my decision to pursue a Ph.D. in neuroscience at Northwestern University; I chose NU partly because I fell hard for the vibrant bustle of cosmopolitan Chicago and for Evanston as well.

My Ph.D. training taught me to be a discerning scientist and pursue those questions that not only most interest me but also have applications for the betterment of humankind.  My postdoctoral years at the University of Chicago extended my ability to think broadly and make interdisciplinary connections. That’s where I discovered my long-term interest to understand the mechanisms of neurological diseases, including my current focus on Parkinson’s disease. Most importantly, during my postgraduate training period, I gained two additional influential and inspiring professional mentors: my PhD advisor Marlene Hosey and my postdoc mentor, the late Susan Lindquist (who went on become a professor at MIT/Whitehead).

In 1995, Noyna and I were married in Kolkata (India), knotting a bond that first began as childhood neighbors, and later as family friends, and then more. A new and exciting phase began in both our lives. Noyna specialized as a labor and development economist with research interests in the economics of education issues associated with U.S. immigrants. Soon, she too received her PhD in economics from University of Illinois-Chicago.

I deliberately declined a tenure-track offer at a national liberal arts college in 1998 and instead accepted a visiting position at Kalamazoo (K) College (MI) so that I could invest more time to become a teacher-scholar and practice and hone my own ideas, while adopting successful strategies at an institution nationally known for science education. Just as I had hoped, I learned how to teach science at K, rigorously and effectively, and it confirmed for me that what I most enjoy doing is teaching undergraduates, mentoring them in research, and helping them become scholars and leaders.

In 2001, we chose to return to our favorite city- Chicago.  I accepted a tenure-track in job at Lake Forest College, while Noyna accepted a market research economist position at a global firm based in Chicago, where she still works to this day.  I was particularly drawn to Lake Forest College (Illinois) because of its diverse student body, proximity to Chicago, and the long tradition of intellectual success of its faculty, where they clearly thrived as teachers and scholars, in especially visible ways in the life sciences.

Over the past eighteen years, Lake Forest has turned out to be a stimulating and exciting academic setting for our family. I absolutely love what I am able to do with Lake Forest students and faculty, and the outcomes I have been able to create in the college community and beyond.  The welcoming environment within which I am able to explore my own professional and personal creativity has made “work” what it should ultimately be: a source of joy and fun.

Currently, our family lives in Lake Bluff (Illinois). In 2004, we became proud parents of our daughter, Shruti Kumudini, who blooms in our lives and completes it in incredibly satisfying and wondrous ways.

My personal belief and experience is that teaching and research are among the highest instruments of intellectual service to society.

My service interests stem deep from my childhood, watching and learning from my parents. They devoted and still devote so much of their energy in helping and improving the communities which they represent. They derive joy from simply helping others succeed, despite the considerable efforts it takes from their lives. They expect little in return. I am awed by the respect my parents command in these communities. Such respect is precious, rare. They have made an indelible difference in the lives of many. They are my role models.

Of disproportionate and formative influence were undergraduate years far away from home at Wittenberg, that small liberal arts college that I am just so proud of to call my Alma mater. Witt holds strong commitment to developing a service-minded individual. College years were rich with opportunities to serve and lead, which helped me develop personally and intellectually. I learned the value of responsible leadership through community engagement. One of the most meaningful rewards is to realize that ideas I initiated over 30 years ago at Witt to increase multicultural and interracial awareness continue to endure as successful college traditions even to this day.

As a visiting faculty member at Kalamazoo College, I witnessed and learned firsthand the depths of personal reward and growth that service provides to faculty. I was awed by the incredible dedication and vision of my colleagues. One cannot easily measure the reward one derives by thoughtfully helping young individuals grow. I find this effort to be an extremely difficult endeavor, but a wonderfully satisfying one. “Making a difference” may be a cliche, but worthy of pursuit throughout our lives, no matter how small individual steps seem.

One of the most productive aspects of the life of a faculty member at a small college is that we get to engage in service interests that integrate into our teaching and research interests. I thrive daily in experimenting with ways to integrate what seem three separate parts of my job. I am deeply committed to issues that seek to improve science education efforts at the K-12 and undergraduate levels and professional mentoring at the post-graduate levels. I am able to practice my long-term commitment to rigorous recruitment and advancement of culturally and economically disadvantaged students to the sciences, and subsequently mentoring their academic success, and also promote global citizenship via international education efforts.

I strive to engage in service at several levels: to my department and colleagues, to students, to the college, to my profession, to my residential community, and to the world at large. During the rest of my career and lifetime, I hope to continue make significant contributions at all these multiple points of impact, within the scope and limit of my abilities. I fully appreciate that few things can be achieved without belief, dedication, time, imagination, collaboration, and respect for others. I look forward to this challenge every day.

The Japanese word Ikigai means “the reason for being”. In other words, its what we look forward to each morning. Through lows and highs, twists and bumps, the road I have traveled so far has helped me discover my Ikigai. The work I do at Lake Forest College has become that perfect mesh of passion, mission, vocation, and profession; work has indeed evolved into play.

“But all my life through,
the very insistence on truth
has taught me to appreciate
the beauty of compromise”
“Satisfaction lies in the effort,
not in the attainment
Full effort
is full victory”
“Life is an aspiration.
Its mission is
to strive after perfection
which is self-realization”
“As a splendid palace
deserted by its inmates
looks like a ruin,
so does
a man without character
all his material belongings
notwithstanding”

From whom I began: 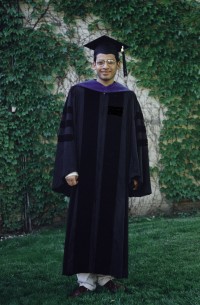 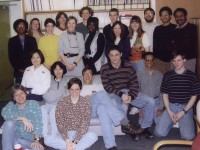 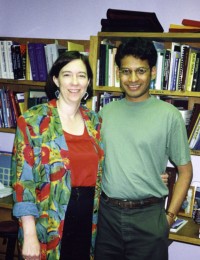 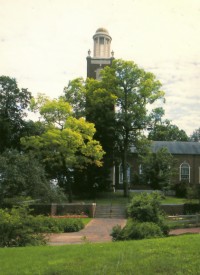 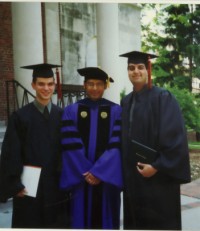 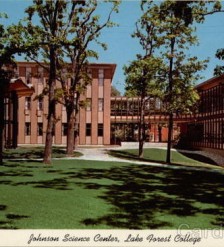 Our first (and hopefully last) home in Lake Bluff in 2006: 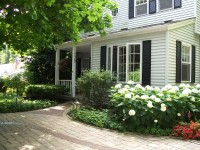 The best and biggest of all challenges — to be Shruti’s papa (2004-present): 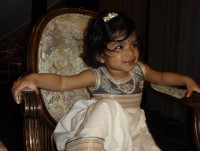 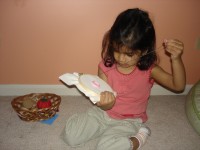 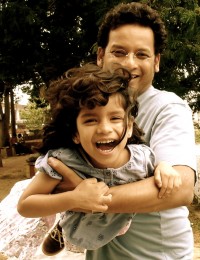 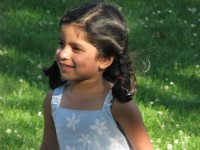 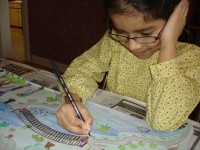 Finding Purpose in the Liberal Arts

Stentor Spotlight of the Month

Getting Brainy with Third Graders