We believe we are the youngest Parkinson's Disease research lab in the world. Our mean trainee age is less than 20. We are a small puzzle piece in a world wide fight against Parkinson's. 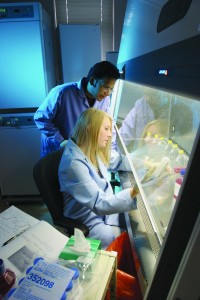 The D-lab is fascinated by how cells manipulate protein shapes. Our research explores why some proteins cause incurable diseases when they change their normal shape. Cells contain a myriad of proteins that, when in their proper shapes, perform tasks essential for life. Within the intensely crowded environment of cells, most proteins require cooperation of chaperones, which help the proteins fold into proper shapes. If the proteins still misfold, they are targeted for destruction. Sometimes, however, proteins acquire wrong shapes that escape the chaperone assistance and quality control; their buildup can kill cells, especially in the brain, and cause neurological disease. Our goal is to characterize molecular mechanisms and identify proteins that can regulate the toxicity that is linked to alpha-synuclein, the protein that kills nerve cells in Parkinson’s disease (PD). Misfolding and aggregation of this protein, oxidative damage, and impairment of protein degradation and protein folding pathways are all hypotheses for the molecular cause of the selective neurotoxicity. To evaluate these hypotheses, we combine molecular genetics, biochemistry, and cell biology, and employ two yeasts as model systems. 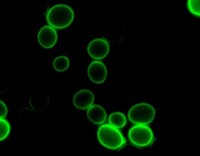 Budding Yeast (S. cerevisiae) has emerged as a powerful model system for understanding molecular aspects of many human diseases. PD is one of the most common NDDs, where the misfolding of a specific protein (alpha-synuclein) is thought to cause selective neuronal death.  A S. cerevisiae expression system for studying alpha-synuclein has recently been developed in our lab. Preliminary evidence supports that both wildtype and disease-associated mutants are aggregating within yeast cells and upon purification. Three goals were proposed.

1) Misfolding properties between wildtype and mutant versions of both proteins will be investigated in vivo (immunofluorescence and GFP-based localization and assessment of protein half-life) and in vitro (by measuring protease sensitivity and differential solubility).
2) Influences of chaperones and ubiquitin-proteasomal pathway proteins on folding and degradation of these proteins will be assessed in strains compromised for chaperone/proteasomal function, or those that overexpress chaperones, and by co-immunoprecipitation assessment. 3) A fission yeast (S. pombe) expression model for alpha-synuclein and atrophin properties (as in Aim 1) will be developed and compared with the S. cerevisiae model; NDD models have not been reported in S. pombe. 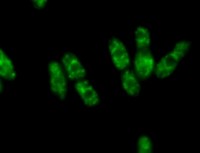 By continuing comparative analysis using both yeast models and by employing genetic manipulation in living cells, the following specific questions that all centrally focus on the molecular determinants within alpha-synuclein and cellular pathways that regulate its misfolding, lipid binding, degradation, and toxicity can be examined. What is the significance of the newly discovered familial PD mutation E46K in vivo? Does alpha-synuclein membrane localization in vivo involve specific phospholipids and is membrane interaction required for in vivo toxicity? Does alpha-synuclein contain domains that confer plasma membrane localization and aggregation in vivo? Can cytoplasmic oxidative stress also cause alpha-synuclein-mediated lethality or is lethality limited to mitochondrial stress? Lastly, does the lysosome also degrade alpha-synuclein and by what mechanism?

This work has been presented at several national conferences since 2009, including Society for Neuroscience and American society for Cell Biology meetings.

This current grant renewal application will seek to extend support for some of the determinants identified above by testing the overall hypothesis that two forms of clearance–endocytosis and autophagy—may both be involved in degrading alpha-synuclein, and they may crosstalk with the proteasome. These processes are modulated by sumoylation, nitrosylation, c-terminal truncations, and splice variants of alpha-synuclein, and its new disease mutants (H50Q, G51D, and A53E).

We propose the following aims to be tested in both yeast models that will specifically examine these hypotheses:

“Satisfaction lies in the effort, not in the attainment. Full effort is full victory”. 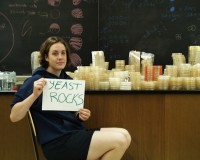 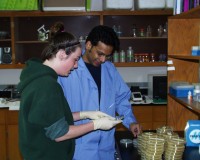 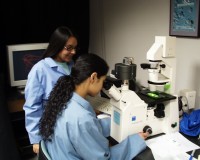 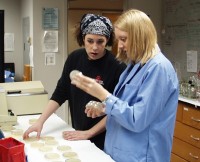 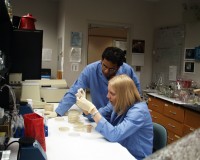 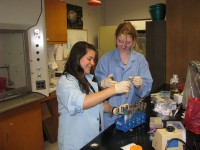 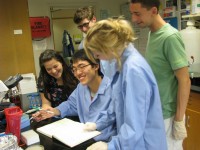 Collaborating and teaching during research is replete with lighter moments! This early camaraderie can lead to lifelong friendships. 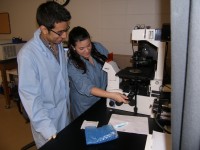 Alexandra Ayala ’09 enjoys teaching Jaime Perez ’10. No wonder she is now a K-12 teacher with Teach for America! 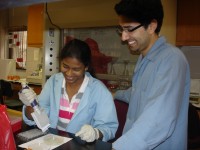 Why reinvent the wheel? What you learn from those before you, you teach to others.What Jaime Perez ’10 learned from Alexandra Ayala ’09, he now teaches Madhavi Senagolage ’12. 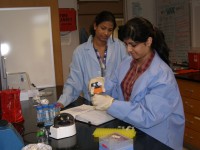 Here, Madhavi Senagolage ’12 guides and trains Richter Scholar Rida Khan ’14.  Research mentoring pipelines like this one sustains project productivity, even as students graduate and move on. 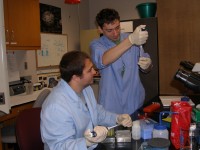 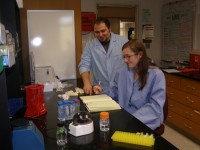 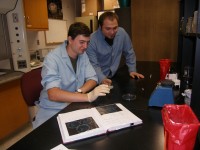 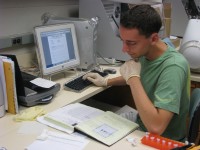 Maintaining regular, accurate, and complete records is a pre-requisite to a scientific career. Michael Fiske ’10 ends his daily routine by logging his entries in his lab notebook. 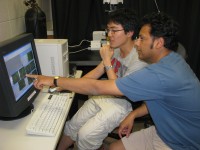 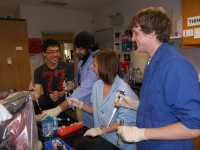 All work and no play is hardly how it shapes out in D-Lab.  Even during times of intense focus, shared humor is not far. 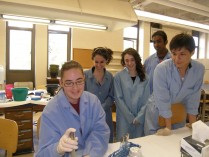 2014 Richter and senior thesis student Katrina Campbell ’14 has much to gain by teaching and mentoring four 2016 Richters (Sarah Chiren ’16, Alex Roman ’16, Jyothis James ’16, and Charles Alvarado ’16). They are helping make several truncation mutants that she will analyze for her thesis.