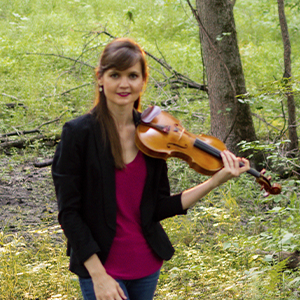 Dr. Kate Carter is a versatile performer with experience ranging from soloist to chamber and orchestral musician. A California native, she is proud to call Chicago her adopted hometown.

As a concerto soloist, Kate has performed many times with the Elmhurst Symphony, with whom she is Assistant Concertmaster. Other concerto appearances have included the works of Beethoven, Sibelius, Mozart, Haydn, Saint-Saëns, Bloch, and more with the Mid-Columbia Symphony, South Orange County Chamber Orchestra, UCI Symphony,  and others. She made her Carnegie Hall solo debut, playing Dvorak’s Romance, in February of 2014.

As an ensemble member, she has recorded for Cedille Records with Camerata Chicago, as well as the Chicago Jazz Philharmonic and Ensemble Nouvelle Epoque. She has performed with Chicago-area orchestras including the Grant Park Symphony, Music of the Baroque, and the Chicago Philharmonic Orchestra. Kate also performs with the Lyric Opera of Chicago.

Kate is passionate about teaching violinists of all levels, and she has held teaching assistantships at the Eastman School of Music, Northwestern University, and the Meadowmount School of Music. She is a frequent guest clinician, adjudicator, and chamber music coach with various schools and youth orchestras in Chicago.  She currently holds teaching positions at Lake Forest College, Northwestern Music Academy, and her private studio in Evanston, Illinois. Her students have won top prizes at the Illinois Music Association State Olympics and are members of area orchestras including the Chicago Youth Symphony and Midwest Young Artists. In June 2016 and 2017, some of her top students performed in the Grant Park Young Artists’ Showcase alongside some 60 of their peers from music schools throughout Chicago.

Kate holds a Doctorate of Music in Violin Performance from Northwestern University, where she received the Emma Peters Hooper scholarship and was teaching assistant to Gerardo Ribeiro. Kate received her Master’s Degree from the Eastman School of Music on scholarship, where she was teaching assistant to Lynn Blakeslee. Her previous instructors include Haroutune Bedelian and William Fitzpatrick.