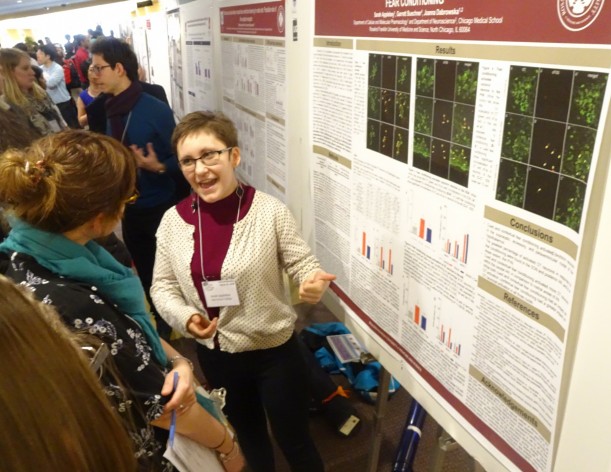 Second Prize Winner Sarah Applebey ’18 presents her researchApplebey’s work was conducted at Rosalind Franklin University of Medicine and Science. “My research identified specific populations of oxytocin neurons in the hypothalamus that may be active in learning to associate a stressful experience with an environment or a specific stimulus, like a light or noise,” explains Applebey. Her research may one day allow researchers to prevent such traumatic associations.

When asked what led to her success as a presenter, Applebey said that “because the neuroscience program at Lake Forest trains students to present primary research, I have been given the skills to communicate research in an understandable manner. My goal was simply to enjoy sharing exciting new research and hopefully pass that excitement to others.” 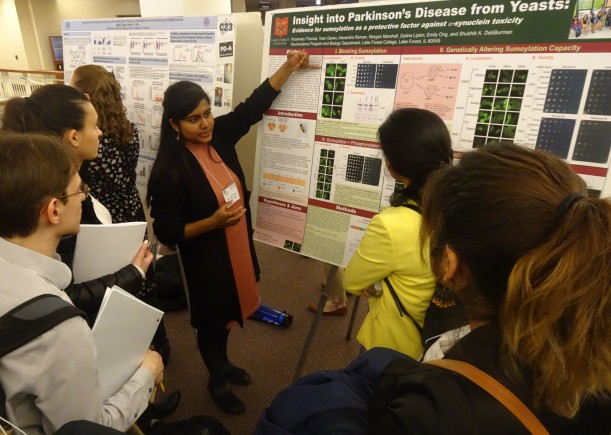 “My research not only gives information on the development of Parkinson’s disease, but it also gives insight into the cause of many other neurological diseases in which protein is misfolding and accumulating,” explains Thomas. “In addition, my research also opens up the many possible pathways for treatments and therapies.”

Thomas is grateful that she and her peers were able to attend the meeting: “As undergraduates, we know a lot about the brain, but we don’t always know what research was performed to get that information. Attending meetings allows an undergraduate to understand the work put into each discovery.”

“I felt deeply satisfied see multiple Lake Forest College students confidently take the microphone to ask provocative scientific questions on a wide array of topics and engage animatedly with several conference podium speakers and many poster presenters throughout the day,” said DebBurman. “Because our curriculum is designed to develop skills in critical thinking and effective professional communication, the fruits of our daily efforts truly came alive.”

“I really got the sense of why research is so exciting,” said Bari Mohammed ’21 about attending the meeting. “When all the hard work is presented and it lights up other people’s eyes, that alone is justification as to why researchers dedicate their lives to doing it. In one sentence, a very enlightening experience that I hope I can attend again.”

The meeting was held Friday, March 23, 2018 at Northwestern Memorial Hospital.

The following Lake Forest College students have won awards at the conference since 2003:

2016
Morgan Marshall ’16, 1st Prize, is a research lab manager at Northwestern Feinberg School of Medicine, will begin a Masters degree in biomedical Communication at University of Illinois at Chicago.

2012
Sydni Cole ’12, 1st Prize, is complete her MD at Northwestern Feinberg School of Medicine and will begin her neurology residency at Harvard University’s Beth Israel Hospital.

2011
Madhavi Senagolage ’12, 2nd Prize, is a PhD candidate in biology at Northwestern University.

2009
Michael Fiske ’10, 1st Prize, is a PhD student in neuroscience at Northwestern University.
Ray Choi ’09, 3rd Prize, completed his MD from University of Colorado and is an anestheiology resident at Rush Presbyterian Hospital.

2008
Stephanie Valtierra ’08, 2nd Prize, received her PhD in neuroscience at Northwestern University.
Alexandra Ayala ’09, Honorable Mention, is a math and science teacher for Teach for America.