The partial solar eclipse that rocked the nation drew close to 200 students, faculty, staff, and community members to Middle Campus on Monday, August 21 to mix and mingle—and view history live.

The Department of Physics set up four solar telescopes donated by Hal Weibel of Lake Forest. The telescopes provided a video feed to computer monitors set up inside a freestanding red tent to offer optional viewing of the lunar progress.

Most viewers, however, clustered on the library’s south patio gazing at the sky through special glasses, while others sprawled out on the lawn—eye protection in place—getting a more relaxed perspective of the solar spectacle.

Intermittent cloud coverage caused temporary breaks in the hour-long vigil, but shouts of “it’s back” prompted the throng to don glasses again and resume their gaze.

The solar eclipse viewing was a first for Jillian True ’21, a graduate of McHenry East High School, and Sammi Cosmo ’21, a Stevenson High School graduate, who watched the spectacle with their First-Year Studies class. Both agreed it was an exciting moment to mark their start on campus. “It’s really cool,” True added.

Chair and Professor of Physics Mike Kash pronounced the event—and the crowd that turned out to watch it—“great” and the weather “not great, but could have been worse,” he said.

From a scientific standpoint, Kash said, “I’m always impressed that astronomy and physics predict an eclipse centuries in advance, but it’s always nice when we see things work the way they should.” 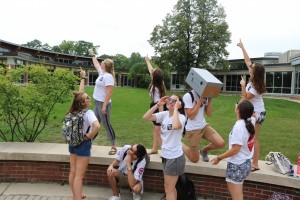