CSFN Conference: A Close Up into the Mysteries of Our Brains

It is 6 am on a seemingly regular Thursday morning, yet for a few ambitious and determined biology students, this morning is unlike any other they have experienced throughout the year. March 25th is the day of the Chicago Neuroscience Conference, during which some of the mysteries about our brain might be revealed and the progress of its understanding will be uncovered. Not only will top researchers in the field present their findings, but also undergraduate and graduate students will be given a chance to present their research. How exhilarating is that? Well, it’s extremely exciting, although at 6:26 am the students standing in the chilly weather at the Metra station don’t really seem to fully embrace this opportunity and exhibit their thrill. Predictably however, the mood brightens up and the atmosphere becomes purely nerdy and scientific, as soon as they arrive at DePaul University nearly three hours later. 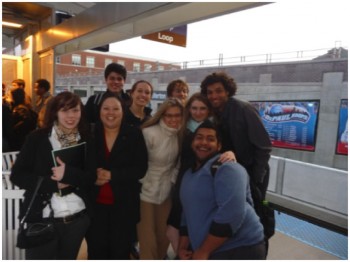 Biology 130 and 346 students on their way to the conference.

As a member of the Biology 130 class, I was required to attend the conference along with the Biology 346 students under the careful supervision of Dr. Shubhik DebBurman. As a first-year student attending the conference, I truely did not know what to expect, and I was slightly afraid that I might not understand many lectures. Never did I hope for the day to be so fascinating.

The 2010 Annual Scientific Meeting, held at the Lincoln Park Campus of DePaul University, started at 8 am and ended at 7 pm. The conference focused on the idea of neuronal degradation, and many of the speakers touched on that issue in a variety of ways during their individual presentations. The meeting began with a continental breakfast and a brief confirmation of registration. The opening talk was a Presidential Symposium focused specifically on Traumatic Brain Injuries (TBI).

To give you an idea of how significant this topic is, let me just remind you that TBI is the number one cause of death and disability among children in America. To make things worse there are currently no proven therapies. Throughout the three talks given on this topic, the overall theme of the conference, neuronal degeneration, was highly incorporated. The speakers focused on the gruesome symptoms caused by the loss of synaptic connections in patients with severe brain injuries.

In the first presentation, Deborah M. Little Ph.D. searched for the central cerebral mechanism responsible for behavioral impairment due to TBI, of which there are 1.4 million cases reported annually in the USA. She was able to conclude that with multiple TBIs, the thalamic projection fibers and brain stem fiber tracts are mainly affected, and the damage spreads out and influences the entire brain. Over time, the effect of numerous TBIs will accumulate, causing impaired cognitive skills and recall of information; thus suggesting an ongoing pathological process taking place years after the injury. Ramona Hicks, Ph.D., aimed to focus on phenotypes, treatments, and outcomes of TBI; yet, her talk turned into an overview of organizations such as NINDS and NIH, and she failed to review any new information about TBI. The third speaker, Mayumi Prins Ph.D., connected TBI to the developing brain and pointed out the idea of alternative fuels. She spoke about the alterations of glucose metabolism visible in TBI, as well as, the role of ketones asalternative substrates for metabolism in those cases. The Presidential Symposium was wrapped up with a quick coffee break, after which came the most exciting part of the day: The Keynote Speaker – Jeff W. Lichtman M.D., Ph.D.His work on connectomics, (by the way, do not try to search this word in the dictionary, it is not there yet!) took the idea of neuronal connectivity that we’ve learned about in class, to the next level. In his presentation “Connectomics in the Developing Nervous System”, he incorporated various patterns of connections, which have developed in the nervous system and showed their alterations over time. Using computer assisted axonal tracing and a generation of transgenic mice in which different axons were labeled with different colors, he mapped out the neuronal pathways. Undeniably, the images that he showed us were mesmerizing! Thanks to his talk, my comprehension of the nervous system discussed in class improved, and I feel that I have gained new knowledge on synaptic pruning. However, these talks were only the opening portion of the day, and there was still much research to be shared. 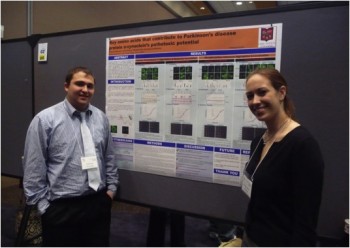 Rebecca Brezinsky ‘11 and Keith Solvang ‘11  presenting their poster at the conference.

After the Keynote Speaker, there was a lunch break during which the public was encouraged to visit undergraduate and graduate posters that would meanwhile be thoroughly judged by specialists. Jaime Perez, Rebecca Brezinsky, Keith Solvang, Carlos Becerra, Will Press, and Derek Atchley all proudly represented Lake Forest College. In the end, Derek’s research work was recognized and awarded third place, while the rest of the students were congratulated and given a certificate of participation. 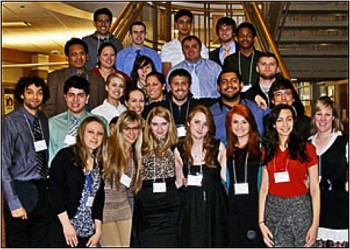 In addition to Lake Forest College representatives, there were many other undergraduate and graduate students from other schools, including DePaul, UIC, and Dominican University. The first poster I reviewed was from University of Indiana, which focused on the endocannaboid system. In the study, researchers produced mice expressing a desensitization-resistant form of the cannabinoid 1 receptor that causes the mutant to be hyper-responsive to the endocannabinoid signaling. In the end however, their hypothesis of the metabolic processes being abnormally high was not supported because the mutant mice exhibited normal functioning of the metabolic system. After reviewing additional posters on neurodegenerative diseases I moved on to the graduate level, where one of the posters really struck my attention.

A confident and knowledgeable Loyola representative explained her research on Lovastatin, which disrupted the TNF α-medisted ICAM-1 protein expression in peripheral nerve vascular endothelial cells. Her reasons for doing this research were particularly touching. Her father has MS; thus, she engaged in a research project that would be similar to this neurodegenerative disease, in hopes of finding some answers. She concluded that Lovastatin actually prevented the expression of the harmful proteins and could potentially be incorporated into therapies in the future.

Following the completion of the poster session I attended several graduate symposiums, out of which I found the last one to be the most interesting. Another Loyola   representative described his experiments on forced exercise in mice, and presented data that showed its partial prevention of induced diabetes. The conference was concluded with a choice of either attending a symposium on neurodegenerative disorders, or dementia.

After the entire day I was mesmerized by all of the issues that the scientists were dealing with that I developed a new passion for neurology, and I can honestly see this field as a possible career for my future. I strongly believe that it’s in the interest of every undergraduate student leaning toward biology to participate in such events. As Alina Konnikova ‘11 said, “Conferences like this one allow students to learn about the progress in the scientific community. Additionally, the poster presentations allow undergraduates to interact with scientists and learn from them first hand.” The participation in such a well-organized conference increases the awareness and educates the attending public on neuroscience, and serves as an unforgettable experience. Aside from the complexity of the issues being discussed, “the theme of the conference was very current and relevant to our lives, which made the presentations even more interesting”-Sajan Koirala ‘13. “I’m looking forward to future conferences, and perhaps they could focus on plasticity in neurodegeneration and injury as the new theme.” Therefore, if you have any interest in neuroscience, or simply in the way that your brain works, I’d advise you to mark March 25th in your calendars for next year and get ready for some incredible breakthroughs.