A recent study determined the structure of the μ-opioid receptor, a common target for opioid analgesics. The structure of this protein has shed light on Gi protein selectivity and its divergent signaling pathway from other GPCRs.

MOLECULAR MYSTERY OF THE μ-OPIOID RECEPTORS

On October 26th, 2017, the US Department of Health and Human Services announced the opioid crisis was a public health emergency (Battista, Pearcy, & Strickland, 2019). Although opioids can significantly reduce chronic pain, they have side effects and addictive properties that lead them to be abused. The primary opioid receptors – mu, kappa, and delta – are connected to the nervous system and to chemical signaling pathways. The pathways associated with the mu-opioid receptor (µ-OR) are tied to lethal respiratory depression and addiction (Fenner, 2018). The primary opioid receptors are G-protein-coupled-receptors (GPCRs). GPCRs convert a wide variety of extracellular signals into a cellular response by activating G-proteins and other transducer proteins.

Koehl et al (2018) studied the µ-opioid receptor, which predominantly binds to the Gi and Go G-protein subtypes. Unlike the Gs protein, the structural properties of Gi-GPCRs are undefined. Koehl et al (2018) determined the native structure of the µ-OR when bound to a morphine-like analogue. Their 3.5 A resolution cryo-electron microscopy (cryo-EM) structure shed light on ligand-receptor, receptor-Gi, and ligand-Gi interactions. Furthermore, they compared their μ-opioid receptor–Gi protein complex to the β2 adrenergic receptor-Gs protein complex to determine why different G-proteins trigger divergent signaling pathways. They found differences in the position of transmembrane receptor helix 6 and in the interactions between the receptor core and Gα subunit. Because of their discovery, opioid researchers can simulate the binding of hundreds of opioid analgesics and determine the compounds that may deliver pain relief without the deadly side effects.

FILLING THE GAP IN OUR KNOWLEDGE OF GPCRS

Koehl et al (2018) provided structural insight as to why the µ-OR does not couple to Gs. While Gs proteins are involved in activation of metabotropic pathways, Gi proteins are involved in inhibition of pathways. Using cryo-EM to determine the structure, they compared their structure to previously solved structures (e.g. β2 adrenergic receptor-Gs protein complex) by superimposing the different proteins. In cryo-EM, molecules are frozen and loaded into a transmission electron microscope to reconstruct their 3D structure. The molecules are trapped in different orientations over a detector, which get a shadow when the molecules are shot with an electron beam. The 3D info is compressed into a 2D image, and the contrasts are inverted and cut out. These cut outs are added together and combined computationally to produce a detailed 3D structure.

In Koehl et al’s (2018) structure, DAMGO was the ligand that selectively activates µ-OR over other opioid receptors. It is an enkephalin analogue and a flexible ligand with multiple rotatable bonds. To further stabilize their structure for cryo-EM analysis, they used a single chain variable fragment (scFv16). scFv16 recognizes the interface between the a and bg subunit, preventing disassembly when the nucleotide binding pocket is empty. Furthermore, it has an asymmetric feature that aids with cryo-EM particle projection alignment.

Because their cryo-EM structure is nucleotide-free, the researchers compared their structure with a previously-solved cryo-EM structure of BU72-bound µ-OR stabilized by Nb39. The BU72-bound structure allowed researchers to study the ligand interactions when the receptor was activated. BU72 was the agonist ligand and stabilized the active structure using single-domain antibody fragments (nanobodies) as G protein mimetic to stable the active conformation of the structure. Koehl et al (2018) found that the conformation of the conserved residues in the GPCR family are nearly identical between these two structures. Koehl et al (2018) also compared the structures of other GDP-bound Gi to provide mechanistic insight of GDP/GTP interactions with the Ras domain of the alpha subunit.

Furthermore, they compared Gi and Gs structures and binding interactions using β2AR, a GPCR that couples to both Gs and Gi/o. Koehl et al (2018) found the primary interaction sites in β2AR–Gs and μ-OR–Gi complex occur between ICL2, ICL3, and TMR3, TM5, and TM6 on the receptor; and αN, αN–β1 loop and α5-helix on the Gα subunit of the G protein. In their structure, interactions between ICL2 of the µ-OR and alpha subunit of Gi were not fully resolved, as Asp350 in the alpha subunit of Gi had poor cryo-EM density; this is a common downfall in cryo-EM. The α5-helix of Gαi is rotated ~21 degrees relative to Gαs, and the C-terminal residues of α5 that interact with TM5 and TM6 of the receptor are bulkier in Gs than in Gi. In the µ-OR, ICL3 stabilizes the interface between receptor and G protein through multiple contacts with a hydrophobic patch on the α5-helix of Gαi (Figure 1) and a set of interactions that engage the β6 strand of Gαi through a network of charged residues. The superimposition of Koehl et al. (2018)’s cryo-EM structure of the μ-opioid receptor–Gi protein complex onto other GPCR structures shed light on why the µ-OR can only bind to a couple G proteins unlike other GPCRs that bind to various G proteins.

Koehl et al (2018)’s structure of the μ-opioid receptor–Gi protein complex is a major contribution to the comprehensive molecular model of GPCR specificity for G proteins that researchers are striving towards. The solved structure of the μ-opioid receptor–Gi protein complex will allow drug developers to design structure-based opiates that selectively activate or inhibit particular signaling pathways, making treatment safer and more effective. Nevertheless, future research must address the pre-coupling of the Gi protein and the binding of the GDP-bound form of Gi proteins (Capper & Wacker, 2018). Koehl et al. (2018)’s structure only provides a snapshot of our understanding of the μ-opioid receptor. Moreover, it does not explain the mechanism of G-protein-coupling specificity across all GPCRs. This would require experiments such as a single molecule fluorescence study that would determine the presence of a transient intermediate complex, which was found in the GDP-bound β2AR (Koehl et al, 2018). Determining the interactions in such stages of the μ-opioid receptor is difficult, however, due to the challenges of cryo-EM. 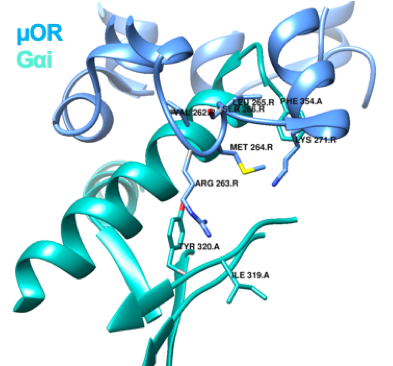 Figure 1. ICL3 stabilizes the interface between receptor and G protein through multiple contacts with a hydrophobic patch on the α5-helix of Gαi. Interactions between ICL3 of μ-OR and Gαi, and between the cytosolic ends of TM3, TM5 and TM6 of the μ-OR and the α5-helix of Gi. Adapted from Koehl et al. (2018).