McCammack authored the award-winning book, Landscapes of Hope: Nature and the Great Migration in Chicago, which was published by Harvard University Press in 2017. The Chicago Defender reported on the discussion:

The Metropolitan Planning Council last Thursday set out to open up conversation about the history, politics and economics behind black and brown lives and their use of green spaces. The panel discussion, which is part of the council’s Equity in Action conversation series, was meant to celebrate progress, examine issues and promote accountability among members of the community and stakeholders for advancing change.

Several panelists made mention of the 1919 Chicago race riots and what needs to be done moving forward to promote a more racially equitable Chicago region. 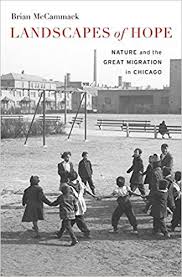 “Not only in Englewood do we have to deal with the negative perception of crime and poverty, but a lot of residents … don’t feel as though they can access public spaces, due to feeling endangered,” she said.

Johnson turned to cite examples of residents who are putting space to new use through the city’s $1 large lot program, which helps grant people access to vacant lots that can be transformed and reimagined. “It is really important for residents to not only have ownership of the vacant lots, but how they use it creates hope and also shows other residents what they can do,” she said.

Irizarry spoke from experience about the importance of parks in the community. “My Puerto Rican-ness was very much bolstered by my experience growing up in Humboldt Park — the neighborhood but also the park itself — which so deeply embodies and is a home for a lot of our cultural expression and community celebrations,” she said. “I understand from my personal community’s point of view how important our local parks can be.”

Irizarry recalled noticing how vacant lots became part of her neighborhood in the 1970s and 1980s, in part, because of arson fires that led to demolition. About that time her observations stirred questions about why her neighborhood looked as it did.

“It led me into a career in affordable housing,” Irizarry said. Irizarry said people have questioned why she started a career with Friends of the Park.

“For me, these things are all very connected,” she said, emphasizing that green space, much like housing, plays an important part in fostering a sense of community among people. Friends of the Park has spent time documenting the inequities in parks and last year released its 2018 State of the Parks Report.

Irizarry said the programming made available by the park district is problematic. “There are community groups doing additional [programming] on top of that, but our argument is that the community’s gains in wonderful community building should not replace government investment in the programming in that space,” she said.

Johnson said the answer to the problems facing the city’s neighborhoods goes beyond integration. “There have to be equitable resources,” she said.