Johnston book talk to include alums

Sometimes Chicago’s weather can be a good thing. Consider Associate Professor of Theater Chloe Johnston’s book talk, originally scheduled during a polar vortex that closed campus. Now reset for 4 p.m. on February 26, Johnston will be joined by Mariana Green ’14 and Ali Hoefnagel ’08—theater alums who are heavily featured in the book.

Hoefnagel, whose show You Can Call Me Al just ran in Pittsburgh, will Skype in for the discussion, while Green will join Johnston in person to talk about Ensemble-Made Chicago: A Guide to Devised Theater.

“Whenever possible, I really like to put the artists front and center, because people that do this kind of work, which is often community-based and social-justice focused, don’t get a lot of attention,” Johnston said.

In Ensemble-Made Chicago, which Johnston co-wrote with Coya Paz Brownrigg, the authors celebrate Chicago’s rich tradition of theater made without scripts or traditional hierarchies, focusing on the work of 15 Chicago companies.

“Each company contributed a couple of exercises that they use in their rehearsal process and there’s also a history of the company,” Johnston said. “To get the exercises, Ali came to a class I was teaching the Loop and taught a few acting games, which we used in the book. Ali was also an interview subject.”

Green is co-founder of FEMalinin, “a really amazing performance group” in Chicago, Johnston said. A rising star in Chicago theater, “one of the chapters in the book is about Mariana’s company,” she added.

The book discussion will be held in Room 221 in the Donnelley and Lee Library. 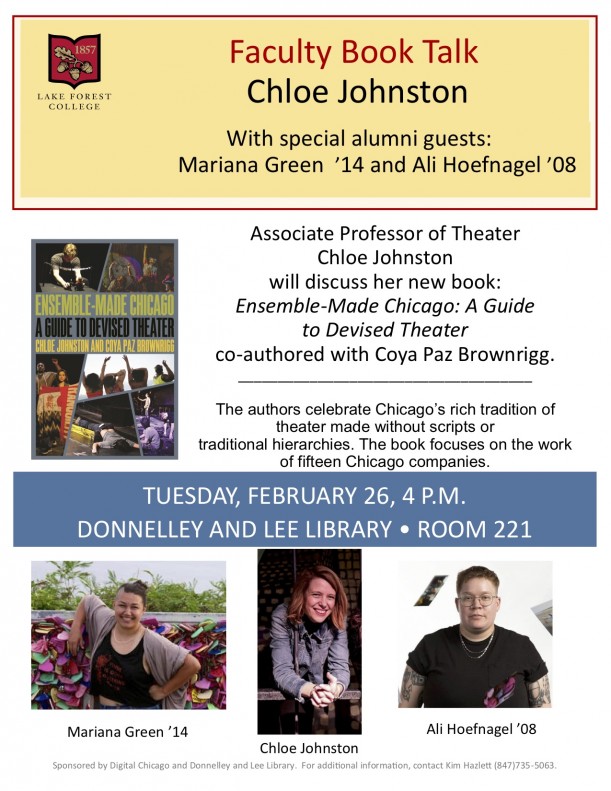