The College’s annual Martin Luther King Jr. Day Holiday program on Monday had students, faculty, and staff uplifted with inspiration to “be the change.”

Following an energizing musical selection sung by the Voices of Inner Peace and President Stephen Schutt’s opening remarks, the keynote speaker of the evening, Jarrett Neal, author of What Color Is Your Hoodie?: Essays on Black Gay Identity, addressed the crowd gathered in the Lily Reid Memorial Chapel.

As a writer, Neal said that rather than just listening to speeches on this holiday, we must question where we stand in society today. More importantly, Neal asked the audience to consider what Martin Luther King Jr. would do if he was alive. “If King could believe it, we could achieve it,” Neal said, “but, have we?”

Neal’s novel, essays, and poetry have been featured in The Gay and Lesbian Review, Chelsea Station, The Good Men Project, and other publications. As a gay African American, he believes that acceptance is essential to redefine the current framework of society. Neal engaged the audience by telling them to be more comfortable with who they are and not to be afraid to make a change.

“It was good to have a black gay perspective, because he [Neal] was able to discuss his struggles not only as a black man but as a gay black man,” said Camry Sanders ’20. “I found it interesting that he said that everything that we do is art and we can use that to fight for the greater good.”

The Chapel was surrounded by artwork made by students during the first-ever MLK Community Art Workshop that took place on Friday. The pieces portrayed the theme of the celebration, “Call to Action,” depicting the importance of fighting for change.

After Neal’s talk, as part of the MLK tradition at Lake Forest College, a group of students lit the unity candle, which contributed to creating an environment filled with love, inspiration, and encouragement. Then the Voices of Inner Peace singers were joined on stage by students and the Vice President for Students Affairs and Dean of Students Andrea Connor to close the ceremony. 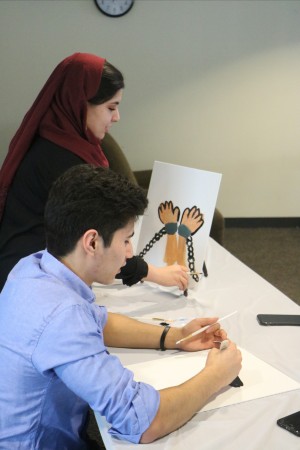