Wild Lupine, or Lupinus Perennis, is in the Fabaceae family – the bean family. It is a perennial wildflower, meaning a single plant lasts about three years. Wild Lupine is an uncommon native wildflower found generally in the North Eastern areas of Illinois as well as other northern areas of the state. 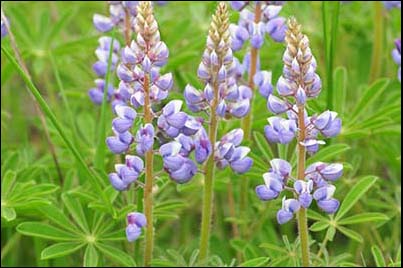 leaf: Wild Lupine only produces leaves in the first year of growth. These alternate leaves are palmately compound, with seven to eleven leaflets. Individual leaflets are one to two and a half inches long, and oblanceolate in shape; with smooth margins.

flowers/seeds: ﻿the petals have a pea-like floral structure, consisting of a large upper banner and two wings that project forward to enclose the keel. After the flower blooms for about one month, the flowers are replaced by elongated seedpods about one and a quarter to two inches long and canescent-hairy like other parts of the plant. Each seedpod contains about seven seeds, which can be ejected several feet away from the mother plant.

It thrives in acidic soil that contains sand or sandy loam, its habitats include sand prairies, openings in sandy woodlands, sandy savannas, edges of sandy woodlands, and stabilized sand dunes. It prefers full or partial sunlight, and some of the habitats it is found in include dominant canopy trees such as pines or oaks – especially Black Oaks. Because of habitat destruction and fire suppression, populations of this wildflower have unfortunately declined over the years. The Wild Lupine plant has a very special relationship with the endangered Karner Blue Butterfly. The butterfly’s annual life cycle is completely tied to that of the Wild Lupine. During the flowering period, the adult butterflies lay their eggs on or near the Lupine so when the larvae hatch, they can eat the leaves of the plant. The larvae eat the interior portion of the leaf, leaving behind the surface layer, distinct transparent areas on the leaves. Dense stands of lupine are necessary to ensure that enough butterflies are produced to maintain the population over time.

The seeds and seed pods are toxic to humans and other animals, as with most lupine plants.